Living standards decreased as a consequence 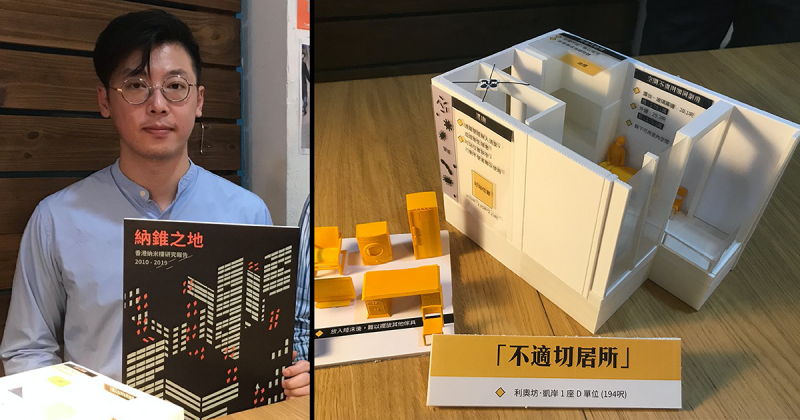 Liber Research Community, a local non-profit researching land use issues, released a report on the proliferation of shoe-box flats in Hong Kong over the past decade. Image from the Stand News. Used with permission.

This story was originally published in Chinese on the Stand News on January 4, 2021. The following English translation is published on Global Voices under a content partnership agreement.

Hong Kong's homes are getting increasingly smaller as “nano flats” proliferate in the world’s most expensive property market, leading to a decrease in the city’s living standards according to a recent report.

The term “nano flat” refers to residential apartments with a saleable area (including bathroom and kitchen) smaller than 24 square meters. Some nano flats are as small as a king-size bed and have windowless bathrooms and kitchens.

A recent survey conducted by the Liber Research Community (LRC), a local non-profit working on housing and land use issues, indicates that between 2010 and 2019, 8,550 nano flats have been constructed in Hong Kong, with 12 percent of those having been released in 2019 alone.

Most nano flats have an open-floor design and, in many cases, the kitchens are located next to the bed, similar to settings of standard hotel rooms.

According to the report, the proliferation of nano flats can be traced back to the government's relaxation of fire safety guidelines in 2011 and building planning guidelines in 2012, which permitted the construction of kitchens without doors or ventilating windows. At that time, the government justified the changes as a way to increase the supply of small and medium-sized flats.

The research group showed how inadequate the living space of nano flats is by examining a (roughly) 12 square-meter unit in T-plus, a famous building of nano flats. The unit is smaller than the average car parking space.

The flats in T-plus are commonly known as “king size bed” units because when the developer first introduced the flats to the public, a representative ironically said that “big as the Forbidden City was, the emperor only needed a bed to sleep on it.”

About 85 percent of the nano flats analyzed by LRC have an open design, or no separate bedroom and kitchen, and about 70 percent had bathrooms without windows.

An 18-square-meter unit in another nano-flat building called Aquila Square Mile, for example, has an open kitchen table just 78 cm away from the bed.

“You can fry a fish while sitting on the bed and the room will be filled with a fishy smell for a long time,” a research team member explained the setting in the press conference.

The shower area in the windowless bathroom is around 0.4 square meter.

The average living space per capita in Hong Kong's public housing system is 13.4 square meters (2020 data). That's significantly higher than the living space available for many residents of nano flats, considering that families of 2-3 also live in those shoe-box homes.

LRC stresses that the size of the living space, as well as the windowless bathroom and the kitchen design of the nano-flats, is unacceptable, and urged the government to introduce restrictions in property development regulations. LRC also defends the creation of standards establishing a minimum floor area per capita in residential buildings.

The Development Bureau, however, told The Stand News it has no such plan. Given the shortage of land supply in Hong Kong, its priority is to increase the supply of residential units.

Henderson Land Development, Hong Kong's largest nano-flat developer (it built 2,858 nano units in the past ten years), says its projects cater to the demand of small families and young home buyers, and that their nano flat buildings are equipped with clubhouses and gyms to meet the needs of their residents.

However, LRC points out that nano flats serve the investment market rather than residential needs, as many of its buyers are investors. Among the nano flats sold first hand between 2010 and 2015, 26.5 percent were re-sold. The research group analysed 722 re-sold nano flats and found that, on average, the buyers only held the flats for an average of 3.48 years, just a few months after the three-year Special Stamp Duty restriction on property disposition expired.

The special stamp duty was introduced in November 2010 to restrict short-term investment activities by demanding extra tax payment if the property is sold within 36 months from the date of its initial acquisition.

Moreover, according to data provided by the government’s Rating and Valuation Department, the property price index of private residential flats smaller than 431 square increased from 242.2 in 2013 to 383 in 2019. That's higher than the index increase when considering all kinds of residential property (242.2 to 383 in the same period).

The supply surge of nano flats, LRC concludes, did not meet the residential needs of small families but fueled the boiling property market.