'... the day when more pan-democrats are arrested than there are pandemic cases.' 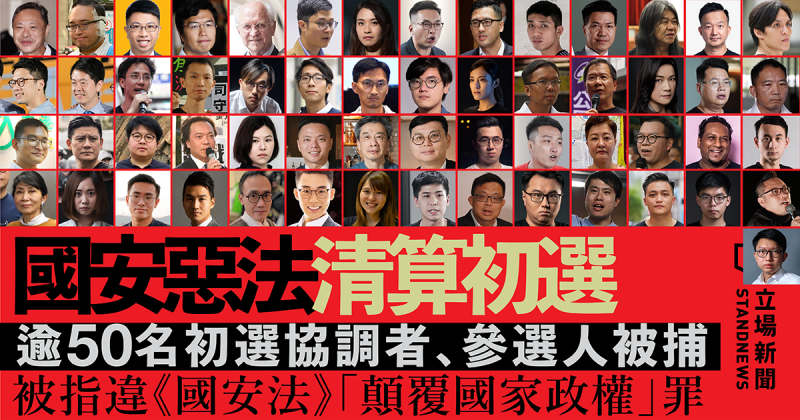 50+ arrested in Hong Kong. Image from the Stand News. Used with permission.

On January 6, more than 50 activists were arrested in Hong Kong under the national security law for having participated last year in the pan-democratic camp's primaries for the 2020 Legislative Council (LegCo) elections which were eventually postponed.

Lawyer John Clancey, who served as treasurer of Power for Democracy, was also arrested and the law firm with which he was affiliated raided by police. The home of Joshua Wong’s was also raided, as the activist–who is currently in prison–had also taken part in the primaries.

#Update 1415: This is the latest list. We haven't received reports of fresh arrests, but some names have had their status change to “verified.” I've also added supplementary info.

In addition to the arrests, Robert Chung and Chung Kin-wah, CEO and deputy CEO, respectively, of the Hong Kong Public Opinion Research Institute (PORI), which had provided logistics for the polling of the primaries, were summoned by police to assist the investigation. A number of pro-democracy media outlets, including Apple Daily News, Stand News and inmediahk, and received court orders directing them to hand in documents related to police investigations.

#HongKong police demanded independent news outlets, @StandNewsHK @inmediahk @appledaily_hk to hand over documents “in connection with national security cases within seven days.” @RSF_inter denounces this harassment and urges for full press freedom in the territory to be restored.

Over 600,000 Hongkongers cast their votes in the July 2020 primaries to choose the candidates who would contest the LegCo election in September. The pro-democracy camp's plan was to win more than 35 seats in the LegCo so that their representatives would have the power to veto the government’s budget.

After the primaries, Hong Kong Chief Executive Carrie Lam stated that as the objective of the primaries was to obstruct the implementation of government policy, the act could be viewed as “subversion” under the then-newly enacted national security law.

The people involved are suspected of making use of what they call a 35+ plan and a ten-step mutual destruction scheme to someway [sic] paralyse the Hong Kong government.

Benny Tai predicted in April 2020 that the national security law would not be implemented until the end of 2021, but Beijing passed the law 18 months earlier to crack down on democratic forces in Hong Kong.

Civic Party chairman Alan Leong stressed in a press conference that it is the constitutional right of lawmakers to vote against a budget. The chairman of the Democratic Party, Lo Kin-hei also expressed the belief that the arrests are in retaliation against politicians who have the backing of the people.

#HongKong‘s pro-democracy camp say the authorities are clearly just taking revenge on politicians that have the support of the people, asking why the police took so many months to respond to their Legco primaries if they amounted to such a serious crime. https://t.co/XKsYTES5TL

The red line has moved so significantly in #HongKong already to arresting lawyer and raiding law firm. 2021 will be a long one. https://t.co/P8xmR5k2YW

Many, including artist-activist Baidiucao, have criticized the European Union for signing an investment deal with China at the expense of Beijing’s political crackdown in Hong Kong:

In response to Hong Kong's political crackdown, I urge the European Parliament to halt the EU-China investment deal and EU to sanction China&HK officials who are responsible to the arrests.#Retweet if you agree MEP should VETO the bill and EU should act.#StandwithHongKong

Antony Blinken, US President-elect Biden's nominee for the post of Secretary of State, was quick to assure the people of Hong Kong of the Biden-Harris administration's support:

The sweeping arrests of pro-democracy demonstrators are an assault on those bravely advocating for universal rights. The Biden-Harris administration will stand with the people of Hong Kong and against Beijing’s crackdown on democracy. https://t.co/nSj8dr3OEg

And activist investor David Webb drew an analogy between the crackdown on democracy and the pandemic:

Never thought I'd see the day in #HK when more pan-democrats are arrested than there are pandemic cases. But then the Government's target is zero, after all. The problem is that the majority of the population has already been infected and there's no vaccine for democracy.