Interview: Ex-Hong Kong lawmaker says education has become a scapegoat for the protests 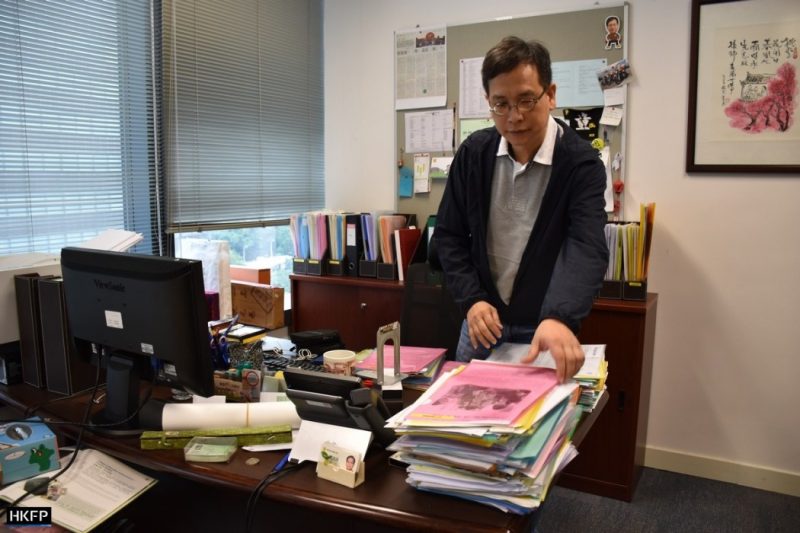 The original post is written by Candice Chau and published on Hong Kong Free Press on January 1, 2021. The following edited version is published on Global Voices under a content partnership agreement.

Hong Kong’s education sector underwent a turbulent year in the wake of the mass pro-democracy protests, with teachers sacked and major changes to the school curriculum. The sector is seen by pro-Beijing forces as one of the instigators of the unrest.

Chief Executive Carrie Lam questioned the effectiveness of Hong Kong’s education in her policy address in November, saying that there was a need to “enhance” the quality of teachers and bolster national identity and national security education.

The government also announced big changes to Liberal Studies, a core subject in the senior secondary school programme which is designed to teach students to think critically.

The subject was criticised by the government and pro-Beijing media as encouraging students to take part in protests. Under the proposed changes the content and teaching time of the subject would be halved, and more focus would be put on content about China.

Former lawmaker Ip Kin-yuen, who is vice president of the Hong Kong Professional Teachers’ Union, told HKFP that while the situation is very grim, he is still hopeful that 2021 could bring better news.

Ip says education has become the scapegoat for the government’s mistakes and Lam was trying to blame young people and education in general for her own blunders. He explained:

In her recent policy address Lam did not reflect on her own role in triggering the protests and of course, she did not admit any mistake committed by herself and her government. On the contrary, she put the blame on education, put the blame on the subject of Liberal Studies… So what she is doing, I think, is practically finding a scapegoat.

Ip also questioned whether the changes made by the government and by Secretary for Education Kevin Yeung were actually for the benefit of education and the students:

I think, certainly, he put political correctness above the benefit to the students.

Ip acknowledged that it was important for students to understand China but they should learn about “the whole picture“ and not just certain aspects.

While teachers still have “a certain level of freedom” to choose the way they teach the designated materials, Ip said they would still be constrained by the syllabus and school administration, as the Education Bureau has started accepting anonymous complaints against teachers under the political pressure from the pro-establishment camp.

The chilling effect of the government’s actions has already been felt in the classroom, as Ip said teachers have opted for the “safest way” to teach when it comes to sensitive materials.

According to Ip, teachers have become more cautious with sensitive topics or material, often retreating to those approved by the Education Bureau. He cited China’s Constitution Day as an example:

Not only is such nervousness is detrimental to the quality of education, Ip said it could also damage relations between teachers and students or between the teaching staff.

Teachers were more cautious “because you don’t know which student is going to complain, or which student would talk to their parents, and the parents might complain.”

Having to leave the Legislative Council did not help Ip’s cause. He and 14 other pan-democrats resigned in solidarity in November after four colleagues were disqualified by the government for “endangering national security.”

Ip said his resignation meant he had lost the platform and resources to speak out for education. But he could continue his advocacy as a leader of the teachers’ union and would not personally miss the Legislative Council.

Looking ahead, Ip said he hoped for a better year but it all depended on the government and the pro-establishment camp:

They can make things even worse, and of course, we know that it’s very likely because nowadays politics have overriden other considerations, even fairness, from the government’s viewpoint.

Not accepting anonymous complaints, for example, would make a big difference, Ip says. He suggested a regulatory body for the profession similar to those for lawyers, social workers and doctors.

For him, clear statutory procedures and rules would be a great improvement on the current “blackbox” in which the government and bureaucrats handled the complaints against teachers.

Ip said the situation could worsen in 2021 since the Legislative Council lacked effective opposition and the education sector could face more attacks under a task force set up to review teaching materials.

The former lawmaker said he hoped the pro-establishment camp would realise that the education system affected their own children and questioned whether they really want a “backward” system.

Are they trying to achieve a system like this for their own children, or for their grandchildren? It’s stupid, I think. So I hope that they can realise what they are doing is not constructive at all. They always try to depict themselves as constructive… that is the totally the opposite of it.

Ip said he would fight on by monitoring the government and the pro-establishment camp outside the Legislative Council, especially on the proposed changes to Liberal Studies.

Even if the curriculum was changed in the coming year, Ip said teachers and parents could still preserve the qualities they treasured in the subject in everyday life. Parents could teach their children not to accept everything that is said by authorities.

Ip also vows to help teachers fight for their rights, including using the judicial system to appeal against disqualifications.

The former lawmaker also urged Hong Kong to make their voices heard in next year’s Legislative Council election, even if some candidates might be disqualified. Pan-democrats might even hope to win a majority and restore crucial checks and balances, he added.

As for himself, Ip said he would enjoy his new-found liberty before deciding what to do next:

I think it’s good for me to take a rest. It has been more than eight years, it’s quite long in the legislature, in this kind of legislature.