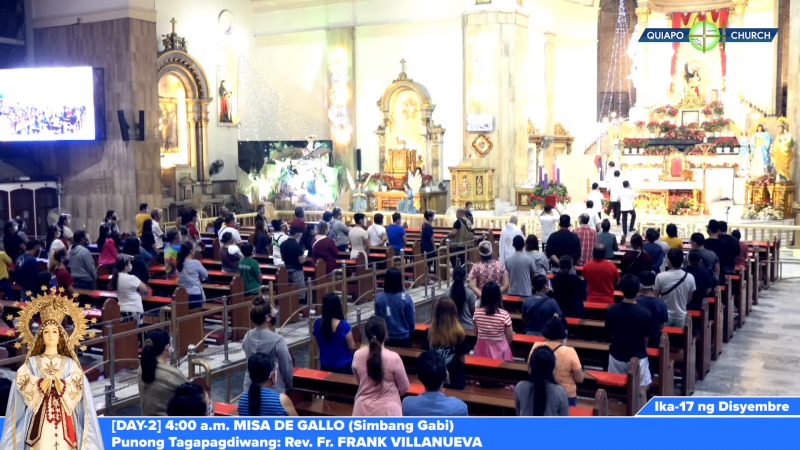 Screenshot of footage from the second day of the Misa de Gallo or Simbang Gabi, the traditional nine-day devotional mass for Christmas, in Quiapo Church in Manila City.

Like in most parts of the world in 2020, the COVID-19 pandemic transformed the way Christmas was celebrated in the predominantly Roman Catholic Philippines.

Amid fears of a new surge of transmissions during the holiday festivities, the Rodrigo Duterte government continued to keep the country under quarantine—already one of the longest in the world. It has discouraged family reunions, Church gatherings and even prohibited the holding of Christmas parties.

On the other hand, authorities have eased certain restrictions and encouraged people to come out of their homes to help revive the economy. The government has allowed the reopening of big malls, restaurants, and beauty salons and has started promoting local tourism.

While Duterte faults the so-called “pasaway” or undisciplined Filipinos for the country's pandemic woes to justify the enforcement of coercive measures like the banning of rallies and mass arrest of protesters, Finance Secretary Carlos Dominguez II also recently blamed the economic woes on consumers’ reduced spending because of their fears of the virus.

In outlining an alternative response to the pandemic, the people's initiative Citizens’ Urgent Response to End Covid-19 (CURE Covid) summed-up the problem with the Duterte government's ‘bungled pandemic response’ as follows:

It is becoming clear that COVID-19 is going to be a prolonged health crisis triggering an unprecedented economic slowdown and the heightening of social tensions. The pandemic has become so destructive not only because of the government’s inadequate, haphazard, and delayed response, but also due to the long-running neglect of the health care system coupled with glaring socioeconomic inequalities. There is also growing evidence that the emergence of coronaviruses is linked to environmental degradation. Sadly, too, we see how the pandemic is used to justify more repressive measures against our people.

Data from the Department of Health showed that the total cases of COVID-19 in the country reached 471,526 while the virus’ death toll has hit 9,162 as of December 29, 2020. The Philippines has the eighth highest number of coronavirus cases in Asia.

Mainstream media have largely reinforced Duterte's “lack of discipline” narrative by training their sights on the crowds trooping to shopping bazaars in search of affordable gifts, while overlooking the lack of adequate systems put in place to control overcrowding amid the pandemic.

As if to underscore the absence of a clear-sighted pandemic response for the Christmas rush, Health Secretary Francisco Duque III had been busy with photo ops of him personally inspecting the physical distance between shoppers with a measuring stick, at commercial centers in the national capital.

Sec. Duque is busy doing photo op rounds with a ruler for social distancing measures, while the rest of the world is busy vaccinating their people. Talking about strategic planning and big-picture thinking. That’s why we have the longest lockdown on earth. https://t.co/qyzl9ON6Y2

Dr Tony Leachon used to be a special adviser to Duterte's National Task Force on COVID-19 but was forced to resign when he publicly criticized the government for gaps that he saw in the risk communication, data management, and pandemic response plans of health authorities. He was also reportedly cursed by Duterte for questioning the efficacy of China's vaccine that the government is promoting as the remedy for the country's coronavirus woes.

Police implementing one of the strictest lockdown regimes in the world have been the target of condemnation for their harsh treatment of ordinary people, including threats to hit protocol violators with “yantok” or rattan sticks, at the same time condoning violations by government officials.

The police also drew criticism from netizens when it initiated the “arestoaguinaldo” prank-arrest operations in Cebu City. Cops presented fake arrest warrants to unsuspecting individuals and herded them into police vehicles before given them “surprise” Christmas gifts. The police prank is a play on the Christmas aguinaldo tradition involving the giving of gifts for children.

If they can produce fake warrants of arrest, then I wouldn't be surprised if they can create a fake warrant to imprison innocent people and activists. https://t.co/B4ItqI7Gj7

Arrest warrants are not jokes. Law enforcement is a serious practice. Pero total naman, under the command of the biggest circus clown, the legitimacy of many of their many practices have turned into a joke. But the jokes of the powerful are no laughing matter, they're dangerous. https://t.co/OGtLGSxH1i

The Christmas season in the Philippines is traditionally one of the longest in the world, with marketing promotions and the peddling of Christmas decorations starting as early as September. One sign of the onset of the traditional holiday season is missing this year, with the banning of Christmas caroling which is usually done door-to-door by choirs and neighborhood kids asking for cash gifts from listeners.

The national government has left it to local governments to decide whether to hold the traditional Simbang Gabi or Misa de Gallo, the nine-day series of dawn-time masses held from December 16 to 24. News reports show Christian devotees observing health protocols and physical distancing measures as they attended mass.

9/9 — Simbang Gabi completed!! Its been a tough year but God is good ?May 2021 enligthen the world with full of Love, Happiness, Contentment and Joyful in Life!❤ Maraming Salamat Ama sa lahat?❤ pic.twitter.com/y7QBjBV8JZ

There were also reports of overcrowding in certain church grounds in Cebu City on the first day of the devotional mass. City officials claim that crowd control efforts were successful overall after difficulties during the first three days of the Misa de Gallo in Cebu. But this also raised questions about the prudence of allowing large religious gatherings in a pandemic.

Because of travel restrictions and coronavirus fears many overseas Filipino contract workers are also skipping their homecomings for Christmas, with many opting to use video-call and teleconferencing applications to make up for their physical absence.