There are 'grounds to believe' that human rights violations continue 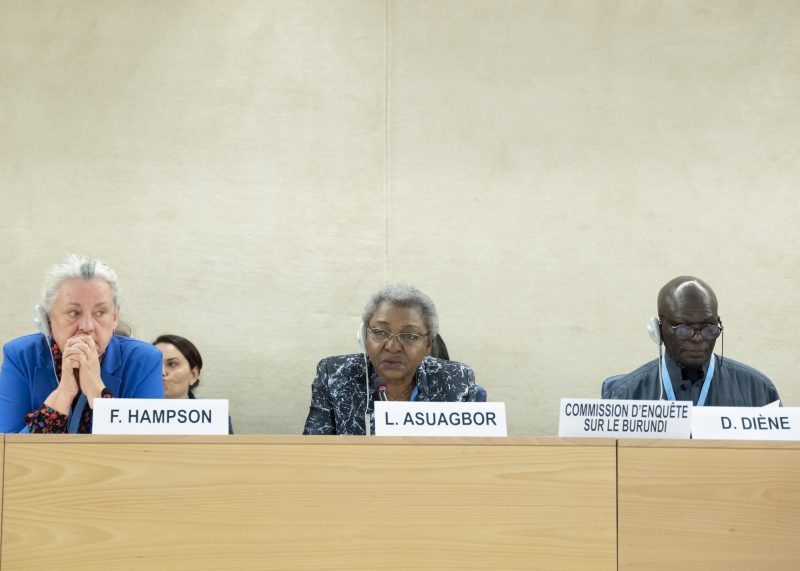 This month, the United Nations Security Council (UNSC) has decided to end specific reporting on Burundi. The UNSC noted improved security and “broadly peaceful elections,” although it still had concerns about rights and democratic space.

In 2016, Resolution 2303 requested the UN Secretary-General to report regularly, due to the political crisis surrounding ex-President Pierre Nkurunziza’s controversial third election in 2015.

A communique by the current Burundi president Évariste Ndayishimiye welcomed it “with joy.” President Ndayishimiye, inaugurated in June, has said this monitoring was motivated by certain governments seeking geopolitical influence and insists that the country is peaceful.

In Bujumbura, there were celebratory demonstrations, although SOS Médias Burundi reported how some attendees said they were pressured to attend.

What a great way to wrap up 2020! The removal of #Burundi from the #UN Security Council is not a simple event, it is historic & a huge victory of Burundi, #UnitedNations & friends of #Burundi. pic.twitter.com/8z9qy427wP

Many in Burundi were skeptical of the news and members of the opposition were disappointed.

Human Rights Watch’s Louis Charbonneau said the UNSC’s meetings on Burundi grew “increasingly contentious and irregular, with Burundi and its allies on the Council attempting to quash much-needed scrutiny.”

HRW said the UN should now “report in detail on the human rights, humanitarian, and security situation” for its regional meetings — to avoid sidelining it.

Analyst Thierry Vircoulon said the move reflected the UN’s lack of influence, but was also skeptical that being more accommodating to the new government would bring concrete changes.

Burundi’s government has essentially stonewalled international attempts to monitor or mediate since 2015, notably the stalled dialogue with opposition members in exile, mediated by the East African Community. Researcher Carina Tertsakian said the UNSC decision was regrettable, but it had done practically little for several years due to international divisions.

The decision followed the UN Secretary-General’s November report, which was less critical than others, suggesting dialogue within Burundi. The government previously ran its own dialogue sessions, as an alternative to regional mediation, which the International Crisis Group criticized as a “sham,” echoing official positions.

However, the government refused the report’s recommendation to extend the UN Special Envoy’s office's presence in Burundi; it will close next year. The office intended to facilitate dialogue between government and opponents after the 2015 crisis, but officials said it was now “obsolete.”

Officials want to definitively leave behind the 2015 crisis. Foreign Affairs Minister Albert Shingiro said UN presence should not have a “political character,” and only concern matters such as economic development. Relationships with international institutions have been strained for years, and officials often dismiss criticisms as imperial interference.

The UN Office in Burundi was closed in 2014, and the UN human rights body’s office was closed in 2019. Burundi left the International Criminal Court after it began investigating rights abuses in 2017.

Burundi's removal from the UNSC agenda is useful for officials to argue the country is now peaceful, and for lifting aid suspensions, given its significant economic problems since 2015, with 1.7 million people facing food insecurity.

The new government has had other diplomatic gains. The International Francophonie Organization lifted post-2015 sanctions. President Ndayishimiye recently met with representatives from the European Union — which implemented post-2015 sanctions — saying high-level dialogue had restarted. There have also been exchanges with Rwandan authorities, after years of tensions.

Ndayishimiye emphasizes strengthening African links, and in November, he visited Equatorial Guinea, and then Gabon, for an Economic Community of Central African States meeting. This is notably more active diplomacy than his predecessor. After the failed 2015 putsch, Nkurunziza only left Burundi once, briefly across the border in Tanzania, where Ndayishimiye also made his first foreign official visit.

The UN Commission of Inquiry’s (UNCOI) annual report, in September, was more critical than UNSC. It did not observe improvements, stating it still has “reasonable grounds to believe” serious human rights violations were committed, particularly around the election targeting the main opposition party, National Congress for Liberty.

Abuses were mainly committed by members of Imbonerakure, youth representing the ruling party, “acting as security forces,” local officials and intelligence agents. UN analysts warned of Imbonerakure resembling a militia even before 2015, and International Crisis Group noted recently that they “continued to pose threats” to civilians.

On October 6, the commission’s year-long mandate, established in 2016, was renewed, as various civil society organizations called for.

Since the May elections, Iwacu newspaper reported calm between different parties in some communes, although opposition leaders mistrusted the election results. Significantly more refugees have returned recently, although there are reports of pressure to return from Tanzania, where many Burundians are staying in refugee camps.

While everyday life continues, reports describe the danger of opposing the government or resisting local rackets, such as forced financial “contributions.” Recently, 89 Burundian and international civil society organizations called for the release of imprisoned activists.

The Burundian Coalition of Human Rights Defenders, of which several member organizations have been banned in Burundi, released a damning report in December. It reported many forced disappearances and abandoned dead bodies — often buried without investigation — and called on authorities to end “almost daily” abuses, especially against opposition and ex-soldiers. It also described generalized corruption and harassment of trade unionists.

However, these reports were rejected by Folucon F, a civil society organization in Burundi, saying peace reigned.

The Burundi Human Rights Initiative’s report, “A stranglehold on Burundi’s Future,” said there were fewer abuses by Imbonerakure following Ndayishimiye’s inauguration, showing what could be achieved with will from high-up. But “barely two months later, the Imbonerakure went back to their old ways, arresting and beating suspected opposition members,” particularly following armed groups attacks in September and October.

It noted the continuing influence of military hardliners, some put in powerful positions such as Prime Minister Alain-Guillaume Bunyoni, disappointed hopes for human rights reforms.

To ??????? : Denounce human rights violations, advocate for release of activists, do not directly fund violators, meet with senior officials.

One diplomat told RFI that Ndayishimiye’s government is trying to “improve” the system controlled by the ruling party, CNDD-FDD  — at least in appearance — rather than fundamentally reform it.

For example, there were some anti-corruption prosecutions, but at lower levels. Impunity for serious crimes and arbitrary detention continue, for example, activist Germain Rukuki is still in prison; journalist Jean Bigirimana’s forced disappearance remains uninvestigated; and Fabien Banciryanino, an outspoken former opposition parliamentarian, was arrested.

More positively, four Iwacu journalists were released from prison by presidential pardon on December 23. They were detained in October 2019 on security charges after reporting on an armed attack. The pardon did not acknowledge criticisms of arbitrary detention and flaws in the trial. Iwacu founder Antoine Kaburahe hoped, though, it could signal a better future for media freedom.

Fundamentally, the CNDD-FDD’s control over institutions, and of military hardliners over it, continues, with opposition weak. Meanwhile, the new government has made some diplomatic successes, which may signal a continued lack of international political will to confront reported human rights violations.