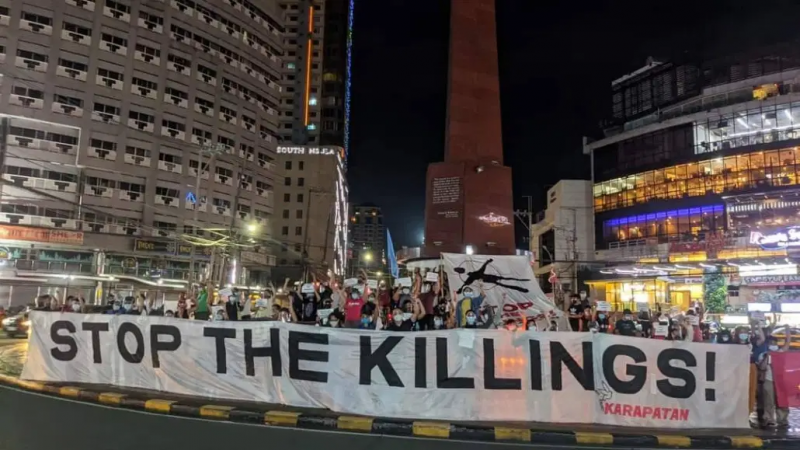 Civil society groups protest the police shooting of the Gregorios in Quezon City. Photo by Kodao Productions, a content partner of Global Voices, used with permission.

Christmas week in the Philippines opened with the killing of Sonya Gregorio, 52, and her son Frank Gregorio, 25, by police officer Jonel Nuezca on December 20. Nuezca, a Master Sergeant who was off-duty and in civilian clothes when the incident happened, was caught on video using his service pistol to shoot his neighbors outside their home in Paniqui, Tarlac north of the national capital Manila.

Earlier in the same video, Nuezca and his 12-year-old daughter are shown in a heated exchange with the Gregorios over the use of boga, a homemade cannon traditionally used to make noise during the holiday season in the Philippines. Nuezca reportedly want to arrest Frank because of the disturbance caused by the boga. But authorities also claim that tension had been brewing between the two neighbors for some time already.

Sonya Gregorio is seen on the video holding her son Frank tightly while Nuezca's daughter asserted that “my father is a policeman.” Sonya shouted back “I don't care” to the tune of K-Pop sensation 2NE1's 2010 hit song. Nuezca then replied, “tapusin kita ngayon” [I will finish you now] as he casually pulled out his gun to fatally shoot the two in the head in cold blood.

Nuezca surrendered himself to authorities and is facing two charges of murder for the shooting. The video taken by Alyssa Calosing, a relative of the Gregorios, quickly went viral while the hashtags #StopTheKillingsPH and #PulisAngTerorista [police are the terrorists] became trending topics on Twitter.

Tonight, we gather at the Boy Scout Circle to assert the people’s call to #StopTheKillingsPH and #EndPoliceBrutality! Demand justice for Sonya and Frank Gregorio and all victims of extrajudicial killings and State violence in the Philippines! pic.twitter.com/haMl1ztaCq

Look at this smug fuck! Imagine all the other powertripping cops not caught on cam!!! #StopTheKillingsPH https://t.co/CbNUIAnnJx

What cops are capable of doing in broad daylight, surrounded by civilians, in front of their own children — all these things make you wonder how much worse they can do in the dark, with no witnesses, no cameras, no law. #PulisAngTerorista

Ben&Ben, a popular indie-pop band in the Philippines, composed a protest song as their contribution to the calls for a stop to police killings in the country.

“Did you really think that power is in your hands? Who do you think you are?”

For many, the event once again highlighted the institutionalized nature of police violence and impunity in the Philippines which has taken a turn for the worse under the administration of President Rodrigo Duterte. According to news reports, Nuezca had faced several administrative charges, including two cases of homicide, but both were dismissed for alleged lack of evidence.

In the wake of the Gregorio shooting, several active police officers had also been called out on social media for justifying Nuezca’s action. The police chief of Bato town in Catanduanes Island, for example, was relieved from duty after saying that the police shooting incident should teach ordinary people to give more respect to police officers.

The first reaction of Debold Sinas, the national chief of the Philippine National Police (PNP), was to warn against taking videos or photos of crime scenes like the police killing of the Gregorios lest the offenders take it out on the witnesses. Infamous for breaking COVID-19 lockdown protocols by holding his birthday party earlier this year, Sinas is also notorious for overseeing Negros Island when a series of extrajudicial killings of peasant activists rocked the island in 2019.

Government spokesmen and officials have taken pains to stress that the incident was the isolated doing of a bad cop. But this is belied by the police forces’ bloody track record of gross human rights violations for the year 2020 alone, abetted by the president’s countless statements encouraging men in uniform to kill criminal suspects and go after human rights activists.

Why do we always associate Duterte when events like killings happen? Because he enables & rewards them. He encouraged a culture where the only answer is to murder and make people suffer. At marami paring hindi nabibigyan ng hustisya dahil hindi ito naisasapubliko #StopTheKillings

NO. Stop with the “gobyerno na naman?” [“It's the government's fault again”] tweets. I'm tired of reading the same shit because YES, THE GOVERNMENT IS THE PROBLEM.

This is what happens when we have leaders who consent and encourage such behavior from policemen. #StopTheKillings

In response to calls for justice, pro-government trolls and DDS (Die-hard Duterte Supporters) on social media have lashed out against calls for government accountability. For independent journalist Inday Varona, the shooting is but the latest symptom of a “systemic madness” that has also affected a significant portion of the populace who readily apologize for the violence of those in power:

They excuse the murders around them, the assaults on citizens as signs of a father’s tough love. They rationalize the bloodshed by saying they feel safer. They dismiss the exposure of corruption scandals, the weaponizing of the law against dissenters, even the prevalence of poverty because their father and his generals blame these as communist propaganda.

It is a systemic madness flowing down from the highest reaches of officialdom. It is the kind of lunacy that allows a provincial cop chief to jeer that death is the logical conclusion if you show “disrespect” to a cop with a gun. That, after all, is Duterte’s typical response to dissent.

But Duterte, who has repeatedly encouraged police and soldiers to just shoot law violators while promising to protect them against legal charges, is on the defensive as a result of the growing public outrage over the Gregorios’ murder. In another of his late-night televised speeches, Duterte changed his tune by saying he only promised to shield police officers who did not break the law.

As the Duterte government faces an investigation by the International Criminal Court for its bloody war on drugs, things may be reaching the tipping point for many Filipinos.