The 19th-century palace's collapse came as a shock and disappointment 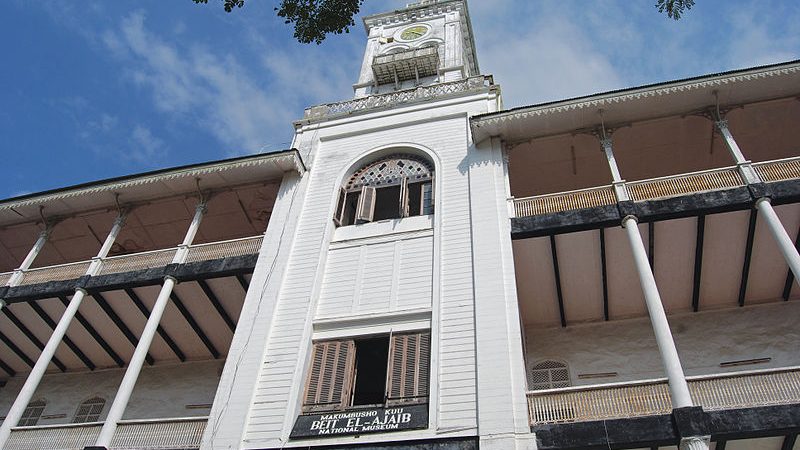 The Beit al Ajaib (House of Wonders) is a landmark building in Stone Town. It is the largest and tallest building of Stone Town, prominently faces Forodhani Gardens on the old town's seafront, in Mizingani Road, June 4, 2012. Photo by Harvey Barrison via Wikimedia CC BY 2.0.

The Beit al-Ajaib, or House of Wonders — the palatial home of Omani sultans in Stone Town, Zanzibar — partially collapsed on December 25, according to video footage and photographs circulated widely online.

The collapse reportedly killed two people and injured several others.

Photographs showing the large scale of damage to a building #بيت_العجائب In the stone city of Unguja, Zanzibar. These pictures show the collapse of the main gate of the house and the destruction of the entire historical lighthouse.

The collapse came as a shock and disappointment as hundreds crowded near the destruction with concern for those trapped in the rubble. The sad scene also left many wondering about the fate of Zanzibar's cultural heritage. 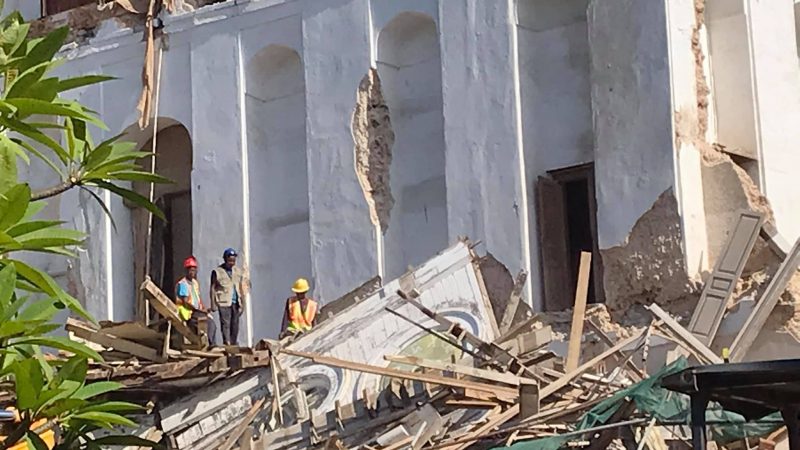 The House of Wonders clocktower comes down after a partial collapse on December 25, 2020. Photo by Caroline Langervoord via Facebook, used with permission.

The building, a vestige of Zanzibar’s Omani cultural heritage and history, had been under rehabilitation in a major $6 million rehabilitation effort to restore the building to its former palatial glory — after years of neglect — and transform it into a museum and cultural center.

“We are very concerned about the news but are still committed to the renovation of the House of Wonders,” a statement from Oman’s Ministry of Heritage and Tourism said on Saturday, vowing to send investigators to Zanzibar to look into reasons behind the collapse.

False information is circulating about the partial collapse of the House of Wonders in Zanzibar stating that the collapse took place after the restoration and the truth is that the restoration was not completed but stopped since the beginning of the year due to the pandemic.

The Omani government also pledged an additional $600 million toward further repairs to achieve full restoration of the House of Wonders.

Oman, after being saddened by the collapse of the Beit Al Ajaib Building, built by Zanzibar's second King Sayyid Barghash, the Oman government has also decided to provide $ 600 million in support for repairs and restoration. pic.twitter.com/mXWDcalKAA

Lela Mohamed Mussa, Zanzibari tourism and antiquities minister, also announced plans for an open investigation into the reasons behind the partial collapse.

Constructed in 1883, for Sultan Barghash bin Said, the spectacular building with seafront views of the Indian Ocean, was the first to have electricity and a working elevator in Zanzibar. The sultans of Oman held their seat of power in Zanzibar for over 200 years until a violent revolution overthrew the sultanate in 1964.

The House of Wonders suffered minor damages during the Anglo-Zanzibar War of 1896. pic.twitter.com/umGDX3ajWp

Many also took to social media to mourn the potential loss of this historical heritage site and share their frustrations with the building's decades of neglect and disrepair.

The Zanzibar symbol, Beit al-Ajaib, House of Wonders has collapsed again. $5 million was provided by the government of Oman for rehabilitation has been spent. #OurHeritage #SaveZanzibarHeritage

On Twitter, Maria Sarungi Tsehai blamed the United Nations Education Science and Cultural Organization (UNESCO) for allowing the House of Wonders — a building that helps define Stone Town as a World Heritage city since 2000 — to fall into such a state of disrepair.

So @UNESCO why did you stand by as House of Wonders in #zanzibar which is part of the World Heritage Site Centre collapse?? Where were YOU?
Cc @bbcswahili @BBCAfrica @VOAAfrica @UN_News_Centre ??
Follow this up! Why was UNESCO quietly watching this decay? #Tanzania pic.twitter.com/9obBLyEdDL

On December 26, the cultural agency expressed “regret and sadness” over the partial collapse. “We are in contact with the Stone Town Conservation and Development Authority (STCDA) which is currently carrying rescue operation and will soon be starting a preliminary assessment of the damage caused by the collapse,” said Mechtild Rössler, UNSECO World Heritage Center director, in a statement on its website on Friday, according to the Oman Observer.

The late Sultan Qaboos bin Said left $15 million in his will to ensure the restoration of the landmark House of Wonders to its former glory. Just this month, the two governments of Zanzibar and Oman signed foundational documents to confirm the renovation plans.

A delegation from the Ministry of Heritage and Tourism visited Zanzibar headed by His Excellency Eng. Ibrahim bin Saeed al-Kharousi, undersecretary of the Ministry for Heritage, to follow up the project of rehabilitation and restoration of the House of Wonders, accompanied by His Excellency Laila Muhammad Musa, minister of tourism and heritage of Zanzibar. 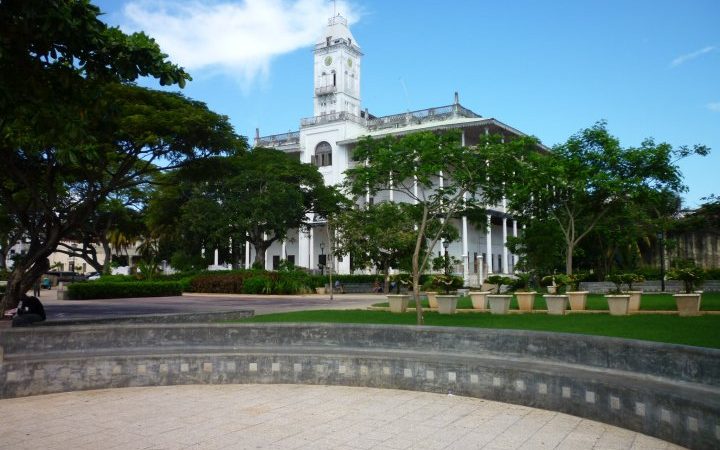 Crumbling under weight of cultural symbolism?

The House of Wonders, with its epic, carved wooden doors and winding interior staircases, has been a major tourist attraction for decades, as travelers and locals alike come to learn about Zanzibar's historical links with the sultans of Oman.

To many, the building represents Zanizbar's rich Arab cultural heritage and tradition. The building, however, is also a reminder of a Zanzibar's colonial, slave-trading past.

Reports of the House of Wonders collapsing go back at least nine years, to 2012, when parts of the roof fell off and several pillars crumbled.

For the second time since 2012, another part of the House of Wonders has collapsed in Stone Town, Unguja, Zanzibar. The first collapse in 2012 was from the eastern (back) side of the house, and this time (today) from the main entrance.

Talks to restore the famed building have been ongoing as Zanzibar and Oman engage in a series of reconciliatory actions to enhance and strengthen ties. In 2011, after 50 years, Omani Air resumed flights to and from the archipelago.

But it wasn't until 2019 that Oman officially signed agreements with Zanzibar to begin the 15-month rehabilitation project, slated for completion in 2021.

Last year, Oman hired Italian architects to help with the restoration, who have yet to release a statement on the most recent collapse:

Italian Company to Rehabilitate House of Wonders.
Costruzioni Generali Gilardi of Turin won the 6-million-dollar tender to rehabilitate the most important palace in Stonetown, the House of Wonders or Beit-el-Ajaib thanks to a grant from the Sultanate of Oman. pic.twitter.com/jCCqGm6QVp