Is the honeymoon over for Beijing and Hong Kong's Carrie Lam?

'Coordinated public criticism is another way of forcing Lam to leave her position.' 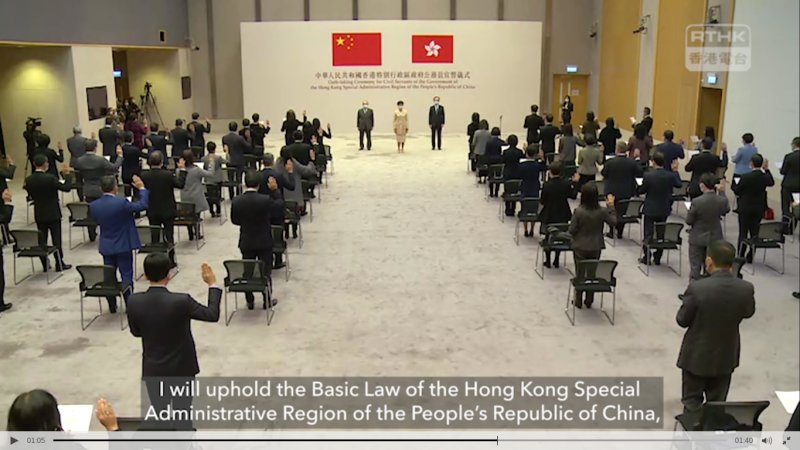 Hong Kong’s pro-Beijing camp is revolting against Chief Executive Carrie Lam, using the city’s failure to contain the COVID-19 outbreak as a pretext.

As of December 22, Hong Kong, a city of 7 million people, has had 8,238 confirmed COVID-19 cases since March and 132 deaths. Since mid-November, the city has seen an increase in daily cases from an average of 10 to about 100.

When compared with cities such as London, New York, and Tokyo, the control of the outbreak could be considered outstanding, but Beijing expects to see a “zero case” victory, similar to what has been achieved in mainland Chinese cities.

On December 16, the former Chief Executive and current vice-chairman of the National Committee of the Chinese People’s Political Consultative Conference (NCPPC) Leung Chun-Ying, slammed the inadequacy of Hong Kong's current anti-pandemic measures on his Facebook page, and argued that the city needed to conduct another universal testing program.

In September, the Hong Kong government spent about half a billion Hong Kong dollars on universal COVID-19 testing of the city's population. But the program was voluntary and fewer than 2 million people turned up for the screening which, in turn, identified only three dozen positive cases.

Pro-Beijing lawmakers echoed Leung's demand in the Legislature. However, Secretary for Food and Health Sophia Chan argues that universal COVID-19 testing, even if compulsory, can only be effective with stay-at-home orders, which is what has been done in China's cities. Chan also said that it is “just logically impossible” to lock up 7.5 million people for two to three weeks.

Compulsory universal screening, compulsory tracking of people’s movement and lockdown of high-risk districts have been proven to be effective and inevitable measures to control the epidemic. After all this time, Hong Kong is still at the stage of exploring such compulsory measures and some experts still consider them inapplicable… [CY Leung pointed out] that the pandemic control measures in Hong Kong are inadequate, while the mainland has achieved a “zero-case” victory. The Hong Kong government should lead society to hit the “zero-case” target as well. Unite all the social and political forces and turn the inapplicable into applicable.

Meanwhile, the pro-democracy sector sees the criticisms about pandemic control directed at the Hong Kong government as a pretext to squeeze Carrie Lam out of the Chief Executive race in 2022.

Ngan Shu-kau, a current affair critic, is among them:

The CCP’s demands of Carrie Lam, that she should adopt mainland China's barbaric control measures, has placed her in a difficult situation. Can Hong Kong follow mainland China’s practice to lockdown a residential district once it discovers a single case? For example, if Tai Koo City has one confirmed case, can the government block all the roads and forbid all residents from stepping out and visitors from stepping in? Can it demand all its residents to buy food and daily necessities once a week? And if they resist, will the authorities seal people's doors and ask them to pick up from baskets hanging in front of their apartments’ windows?

Can the government mobilise so many people to carry out the measures? Does the government have legitimate power to restrict people’s freedom? How about the collateral damage caused by the lockdown? Will the government be liable if someone dies during lockdown? How about the social chaos and the economic damage? (…) Unfortunately, Carrie Lam's power comes from the CCP—it is impossible for her to follow such orders in Hong Kong, but if she disobeys, she won’t be blessed. That’s why either way, she is doomed.

Considering the current circumstances, Carrie Lam will lose power. The problem could have been solved internally to save her face. Now that there is such coordinated public criticism, this is another way of forcing her to leave her position.

Speculations about Beijing’s loss of confidence in the Hong Kong leader emerged in mid-October after she abruptly deferred her policy address, reportedly because Beijing wanted to revise its content.

A month later, Beijing unseated four pro-democracy legislators, which triggered the collective resignation of all pro-democracy representatives from Hong Kong's Legislative Council—where Carrie Lam’s policy address was finally delivered, in a legislature with then no opposition voices.

In a late November interview with the South China Morning Post, Lam claimed that she had “regained her confidence” and was “back to her old self” to implement stricter anti-pandemic measures.

Two weeks later, amid the new round of the COVID-19 outbreak, Xi Jinping postponed his annual year-end meeting with Lam. She was the first Chief Executive since the handover of Hong Kong to China in 1997 to have this official trip canceled.

In an editorial on December 15, pro-Beijing online media outlet HK01, which had been questioning Lam's ability to run Hong Kong, interpreted Beijing’s unprecedented gesture as a sign of lost trust in Lam, suggesting that her failure to control the pandemic could have political consequences.