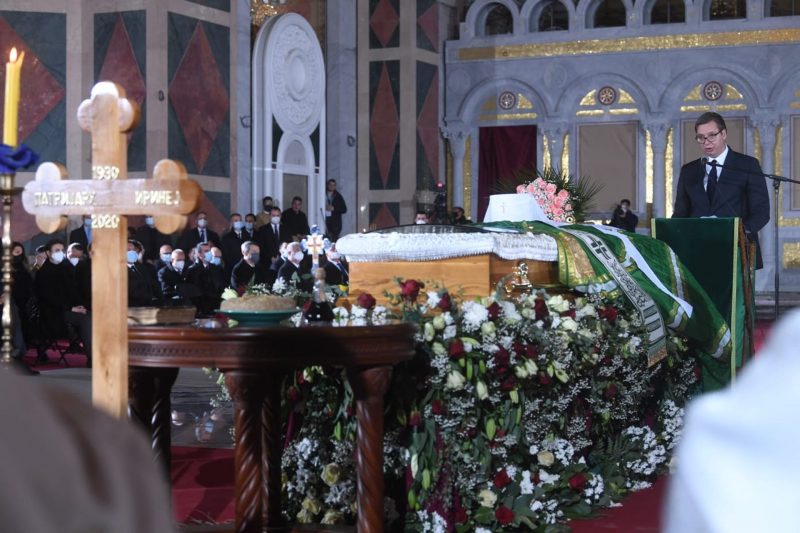 Serbian President Aleksandar Vučić holding a speech at the funeral of Serbian Patriarch Irinej in Belgrade on November 22, 2020. Publicity photo by Presidency of Serbia/Dimitrije Goll. Use permitted.

French President Emmanuel Macron´s tweet expressing his condolences to Serbian President Aleksandar Vučić “and all Serbs” upon hearing of the death of Serbian Orthodox Church Patriarch Irinej because of COVID-19, set off an online backlash.

I phoned president Aleksandar Vucic to express condolences after I received the grave news about the departure of Patriarch Irinej. France joins all Serbs in their mourning.

His critics demanded consistency with Macron's openly stated positions against religious extremism which is known to fuel hatred and if unchecked, leads to violence, as shown by the Yugoslav Wars in the 1990s.

People in the Western Balkans and beyond were perplexed as to how was it possible for someone who claimed to defend secular, enlightened values in Europe to invest France's institutional political capital into association with a figure who, along with the Serbian Orthodox Church, had come to symbolize everything that is backwards, deeply socially conservative and racist about Serbian society.

Today, thousands gathered in Belgrade to pay their final respects to Serbian Patriarch Irinej, who succumbed to COVID-19 on Friday. His casket was covered in plexiglass and occasionally sprayed with disinfectant.

Here's a 🧵on his controversial legacy.https://t.co/xuo2Rcrw1A

A large number of Bosniaks, Albanians, Croats and even some Serbs on Twitter also pointed to the fact that Patriarch Irinej was a notorious genocide denier, a supporter of convicted war criminals army general Ratko Mladić and former president of Republika Srpska Radovan Karadžić, and had claimed that the 2017 genocide verdict for the Serb general was “the devil´s work, by the world´s powerful.” Mladić was found to be guilty of—among other things—the crime of genocide, for ordering the execution of over 8,000 Bosniak civilians, mostly men and boys, after the fall of Srebrenica.

concept: maybe a president who considers himself liberal shouldn't mourn an assadist, a homophobe, and a man who refused to take action against pedophilia in his church https://t.co/WHVJgSEzbN

While Patriarch Irinej´s rhetoric was not as bellicose as that of his war-time predecessor Patriarch Pavle, he was a clear supporter of Greater Serbian nationalism and irredentism. It was evident that the Serbian Orthodox Church during his time in power did nothing to distance itself from the Greater Serbia ideology. The Patriarch himself repeated publicly the mantra that “wherever Serbs lived, be it in Serbia, Bosnia, Vojvodina or Montenegro, or other places, that is Serbia.”

The Serbian Orthodox Church has a long history of supporting Greater Serbian ideology. Irinej´s predecessor openly supported the Serb war effort in Bosnia and Herzegovina, Croatia and Kosovo. As well as giving shelter to, and promoting war criminals like Milan Lukić, one of the most notorious mass murderers during the Bosnian genocide. In 2011, the Serbian Orthodox Church held a book launch in Belgrade´s biggest church, the Cathedral of St Sava to promote Lukić´s book. In 2012, Lukić was sentenced to life in prison for his role in massacres that had resulted in the deaths of over 100 people.

In fact, the role of the Serbian Orthodox Church in fanning the flames of nationalism and ethnic hatred was so transparent that in 1995 it sued three French newspapers; Libération, Le Monde and Le Figaro for articles accusing the Orthodox Church of supporting ethnic cleansing, war crimes and genocide in Bosnia and Herzegovina. The Church lost its case in the French court. Serbian-American historian and religious scholar Michael A. Sells wrote in his 1998 book: The Bridge Betrayed: Religion and Genocide in Bosnia:

“The violence in Bosnia was a religious genocide in several senses: the people destroyed were chosen on the basis of their religious identity; those carrying out the killings acted with the blessing and support of Christian church leaders, the violence was grounded in a religious mythology that characterised the targeted people as race traitors and the extermination of them as a sacred act.”

In June 2019, the Patriarch met with Syrian dictator Bashar al-Assad in Damascus. According to Balkan Insight Irinej praised Bashar al-Assad on his “principled stand” of refusing to recognize the independence of Kosovo, as well as Assad comparing Syria to Serbia, claiming that what both countries “have been exposed to in terms of foreign interference and attempts to undermine their sovereignty and undermine their social fabric” constitute good reasons for their relationship and co-operation.

The Patriarch, of course, did not mention the well-documented industrial-scale mass atrocities committed by Bashir al-Assad's army as well as Russian and Iranian forces, including chemical weapons attacks on civilians, carpet bombing of cities, barrel bombs, and concentration camps. He also failed to mention the presence of Serb mercenaries and volunteers fighting for Assad. As was reported by Balkan Insight in 2016, many Serb fighters were simply transferred from Ukraine, where they fought against the Ukrainian government, to Syria.

In 2014, Patriarch Irinej also weighed in on the then-upcoming Belgrade Pride parade as “the tip of the immoral iceberg” by saying that he “felt sorry for those people who belong to the so-called gay population.” He promoted discrimination and disinformation that dehumanizes LGBTQ people by adding:

“It is a disorder or deviation of human nature. I can understand them, as well as their problem, but I cannot understand why they impose this problem unto us or try to show it off publicly.”

Irinej was also opposed to stricter rules for churchgoers during the outbreak of COVID-19. He is on record as saying that he believed that the methods used as liturgical instruments to distribute Holy Communion in Eastern Orthodoxy, including glasses and spoons needing to be cleaned after each person, were not in line with Church tradition, that it was something new that was not compatible with the faith. That led to footage of Serb Orthodox faithful across the Western Balkans receiving Holy Communion with the priests using a single spoon or glass, and this was at the height of the COVID-19 outbreak.

This prompted some commentators to point out that the Serbian Orthodox Church was above the law of the land and was risking the lives of its followers and everyone else who came into contact with them, simply because of their unwillingness to break with tradition even when faced with a pandemic.

That unwillingness killed Irinej as well as his counterpart in Montenegro, Metropolitan Amfilohije Radović who also died from COVID-19. Patriarch Irinej attended the open-casket funeral of Metropolitan Radović along with a large crowd inside the church, with almost nobody wearing masks and with mourners kissing the deceased cleric's hands and forehead, according to custom.

Likely reasons for Macron´s gesture include appeasing Russia, which is often promoted in the Balkans as chief ally and protector of Serbia and the Orthodox Christianity among the Slavs. Analysts examining his new approach to Russia, the so-called reset, inaugurated in July 2020, expressed concern that it might involve abandoning the Western Balkans to Russia, as it traditionally views the Balkans as its sphere of influence. The Serbian Orthodox Church is a key element in facilitating Russian influence in the Balkans with its long history of supporting the Kremlin agenda.

That notion also explains Macron's interview with The Economist last year and his outrageous and debunked comments about Bosnia and Herzegovina as a jihadist “ticking time bomb” in the Balkans, which drew criticism about structural Islamophobia. Added to that were his comments about Albania and North Macedonia and his subsequent veto against EU accession negotiations for the two Western Balkan countries.

Another reason might be appeasing the French right and far-right voters. As CNN pointed out at the end of November, “Macron is following a well worn path of French presidents.” Their skepticism about EU expansion through admitting countries from Eastern Europe, particularly those with large Muslim populations, dovetail with Macron´s desire to appease Russia and be re-elected with the support of domestic right-leaning voters.