The world's tallest mountain has grown by 86 centimeters 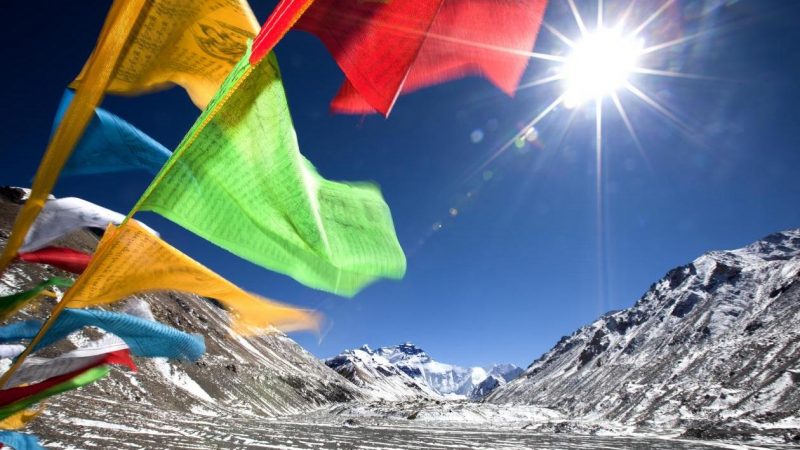 Mount Everest. Image from Flickr by Christopher Michel. CC BY 2.0

After more than a decade of dispute and controversy over the true height of Mount Everest, the world's tallest mountain has a new official elevation: 8,848.86 metres, or 86 centimeters taller than previously thought.

The new measurement was jointly announced by Nepal and China, the two countries that abut its tallest ridge, via a virtual press conference on December 8. Teams from both countries carried out the measurement exercise.

Geologists had previously speculated that Nepal's 2015 earthquake could have caused Everest to shrink, which is now confirmed to have not been the case.

Given that the COVID-19 pandemic has shut down tourism in Nepal since March, the announcement was timely, as the country is slowly beginning to reopen to tourists.

Over 16 percent of Nepal's visitors come for the purpose of mountaineering since the country boasts eight of the ten highest mountains in the world.

The national survey departments of Nepal and China began the Everest height measurement project in 2017. Measuring a mountain is not easy as it requires state-of-the-art instruments and appropriate survey techniques. The exercise took three years to complete, as there are many factors that impact upon measurement efforts, including adverse weather, the elevations of rocks at the summit, ice levels and other environmental challenges.

Prior to this collaboration, height measurement tasks were typically conducted by teams from other countries, including Italy, New Zealand, India, and the United States.

It is a proud moment for Nepal. As soon as the news was announced, Nepalese netizens and mountain lovers expressed their happiness on social media:

Mount Everest’s new height is 8848.86 meters, announced by the authorities. May the aspiration of every Nepali grow to excel as the height of the majestic Everest! pic.twitter.com/Eb6c32j9Li

Twitter user Love Joshi, a teacher from Kathmandu, saw parallels between the mountain's new height and the need to uplift the people of the country:

My. Everest New-height is 8848.86 meters. Now we need to increase the height of Nepal and her people. pic.twitter.com/fvzgjPwmqE

Deependra Shah, a Nepali expat living in Italy, joked about the 86-centimeter increase:

Person who climb the Mount Everest will be climbing new height at 8848.46m breaking old record at 8848m.

What does it mean for Nepal-China relations?

This recent collaboration has strengthened ties between China and Nepal. In 2019, China's president Xi Jinping visited Nepal, 23 years after the former president had paid the last state visit. The two governments have since signed 18 Memoranda of Understanding (MoUs) and two letters of exchange for various sectors, including agriculture, commerce, manufacturing, and transport.

Nepal shares borders with both India and China, so many social media users have been observing its relationship with both countries, which is widely held to have strategic importance.

Over the years, India's increasing interference in Nepal has been criticized widely. The differences between the two countries further widened when Nepal's cabinet released a new map in May 2020 placing Limpiyadhura-Kalapani-Lipulekh within its border. The consequent border disputes created a rift between the countries as both claimed the territory as their own.

In recent times, India has made some efforts towards reconciliation. Some experts believe that this is a deliberate effort of India in order to prevent the closeness between Nepal and China.

The geopolitical significance of Everest’s change in height

But India is unlikely to be happy about Beijing cozying up to another of its neighbors https://t.co/FlQmFZsMII

From trekking in the Himalayas to cultural attractions, Nepal offers a wide range of thrilling experiences for tourists.

As many as 1.17 million international travelers visited the country in 2019. Earlier this year, Nepal ran several promotional campaigns around the world to encourage tourism, which came to naught because of the COVID-19 pandemic.

The country's tourism industry has been one of the hardest-hit sectors, as people limit their outdoor activities and cancel their travel plans. These restrictions have led to massive layoffs in Nepal's tourism industry.

To help it recover, the government of Nepal is gearing up to welcome tourists once again. Although the country has eased some travel restrictions — visitors must have a valid visa and a negative COVID-19 report obtained no more than 72 hours prior to entry, and follow all health and security protocols advised by the government — the land borders remain closed.

In anticipation of new tourist arrivals, the infrastructure of many destinations has been upgraded, and new projects are being planned. Some, however, were quick to remind social media users of the positive impacts of the COVID-19 travel restrictions.

The anticipated increase in tourists is expected to boost the Nepali economy and help the country recover from the pandemic-induced economic downturn. Perhaps Everest's additional 86 centimeters will help push the destination to the top of travelers’ bucket lists.