密 (mitsu), in some cases, means 'close, crowded or confined'

The Chinese character (kanji) “mitsu” (密) has been named the kanji that best symbolizes the year 2020 for Japan. The kanji is unveiled each year at historic Kiyomizu Temple in Kyoto. Screencap from FNN official YouTube channel.

After a year dominated by the COVID-19 pandemic, Japan has chosen 密 (mitsu) as the kanji (Chinese character) of the year.

While literally translated as “secret,” the character 密, in this case, can mean “close, crowded or confined,” and refers to the “three mitsus” (三密) that make up the basic public health response to COVID-19 in Japan. 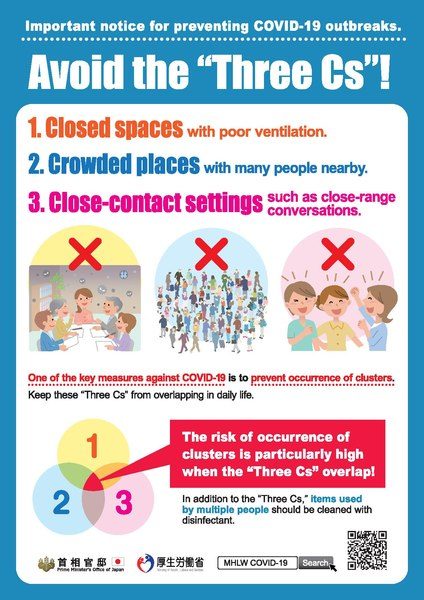 In English, the three mitsus are known as the “three Cs”, meaning “crowded places,” “closed spaces” and “close-contact settings” — the three things people are advised to avoid in order to contain the spread of COVID-19.

Every year, the Japanese Kanji Proficiency Society (財団法人日本漢字能力検定協会) designates a kanji of the year based on the results of a nationwide poll. More than 208,000 people from around Japan voted on a list of kanji, and mitsu ranked first, with 28,401 ballots.

As translator Richard Medhurst notes, the character 密 appears in a variety of compound words that are related to “secrecy”:

[How each word is pronounced]

Not everyone was focused on the negative parts of 2020 when selecting a representative kanji for the year. In a separate survey, Japanese elementary school students chose characters that represented the positive aspects of the past year, such as being able to attend school or spend time with friends when early quarantine efforts were relaxed in Japan in late spring.

Compared to other countries, Japan has generally been considered to have kept COVID-19 under control this year, in part due to the community response. However, in late fall and early winter, COVID-19 cases have risen and have remained stubbornly high in some parts of Japan, leading some medical groups to declare an unofficial “state of emergency” in December as hospital capacity has become stretched.

In mid-December, the Japanese central government announced plans to suspend a popular program that boosted tourism by subsidizing travel and accommodations in Japan. The plan will be suspended from December 28 to January 11, when millions of Japanese people typically travel from major cities back to their regional and rural hometowns.

Japanese prime minister Suga Yoshihide also implored people to avoid close contact with others — in other words “mind the 3 Cs.” However, Suga, whose popularity had already plummeted since succeeding Abe Shinzo as prime minister in September, received even more criticism in December after it was discovered he enjoyed a steak dinner with other politicians.

The meal directly contradicted the government's instructions to avoid gathering in small groups, and Suga was forced to respond to critics and explain himself.

Writing for Bloomberg, Japan correspondent Gearoid Reidy shared his own take on what words best express how the year 2020 is ending for the Japanese prime minister.

Will the prime minister prove to be FLASH IN THE PAN and end up with his goose COOKED as he faces a GRILLING over this HALF-BAKED dinner party? Is the HEAT ABOUT TO BE TURNED UP or will things SIMMER DOWN?https://t.co/Yd6G9VcXWu