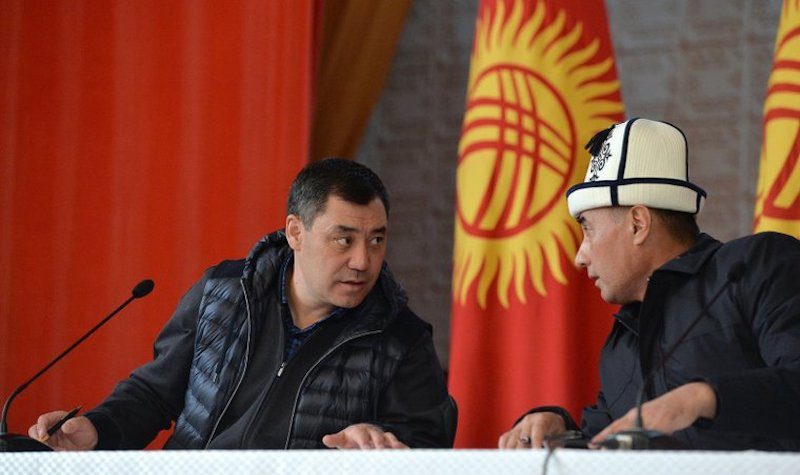 This article originally appeared at oDR, openDemocracy's section on Russia and the post-Soviet space. It is republished here with permission, and has been edited for style and brevity.

Oljobai Shakir is a popular blogger and political activist in Kyrgyzstan. But his popularity has come at a cost. Since the country’s contested election in October, Shakir, an LGBTQ activist, has started receiving threatening comments, including those directly against him. Oljobai is not alone in receiving politically-motivated threats. Civic activist Ulan Usoiun reports that he sometimes receives up to 40 or 50 threats a day. Unidentified people have also attempted to assault Usoiun in person several times.

In the aftermath of Kyrgyzstan’s October election, social media posts and videos of public events featuring politicians and activists, who criticise Sadyr Japarov — who became interim prime minister and president in the post-election crisis — for his constitutional reform and other initiatives, immediately gather hundreds of comments. Japarov is currently running for president in elections set for January 10.

As we have previously reported, the combination of support for Japarov in Kyrgyz-language social media and the merciless trolling of his opponents online was crucial to the politician’s meteoric rise to power in the chaotic post-election environment, a pattern that has only escalated in the weeks since.

Currently, the overwhelming majority of comments contain hate speech and death threats against opposition figures, as well as explicit threats of sexual violence against female activists. Indeed, according to activists who have been subjected to this kind of trolling, it is public comments by Japarov himself that have provided a clear signal to his supporters and social media trolls to openly harass and threaten his opponents, as well as independent media. “Go to hell those [opponents of the new constitution] who cry out for their own interests,” he said in a Facebook post on November 19.

Such threats aren’t exclusive to Kyrgyzstan. In the US, for instance, female activists with the Black Lives Matter movement have received thousands of racist comments including death threats. What differs is that in Kyrgyzstan these threats go unchecked. Essentially, the Kyrgyz segment of social media — whether Facebook, YouTube or Instagram — is a fully unregulated domain where users are able to express the most virulent threats without any consequences.

During his presidency between 2011 and 2017, Almazbek Atambayev regularly incited the Kyrgyz public against independent mass media, opposition leaders and NGOs by labelling them “traitors”, “westerners” and “spies”, reproducing conspiracy theories similar to those fomented by the Kremlin against dissidents in Russia.

Now, Japarov is taking a leaf out of Atambayev’s playbook. Pro-Japarov trolls “have the president’s full support,” Karasartova continues. “They call us ‘enemies’, ‘spies’. They accuse us of being ‘traitors who sell national interests’. This rhetoric is projected by the president himself. [Trolls] fully reproduce the president’s discourse,” she says. 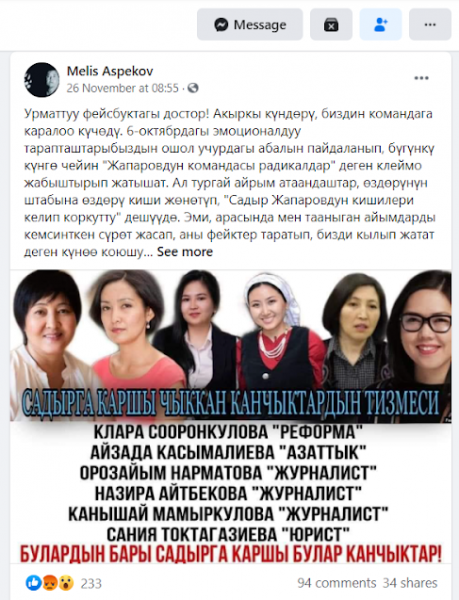 A Facebook post by Melis Aspekov, a close associate of Japarov and admin of one his Facebook groups, in which he claims that Japarov's opponents simulate troll activity and denies that Japarov supporters produce the kind of attack posters featured below | Source: Facebook

Since the parliamentary election, Karasartova admits, the intensity of online attacks and threats has significantly increased. If previously she used to receive threats mainly from anonymous or fake accounts, now she says she gets death threats from ordinary social media users via private messages in Facebook Messenger, in addition to public comments on online platforms and media websites. For example, we found one user who made a death threat against Karasartova via private message under their real account on Facebook.

Presidential candidate Klara Sooronkulova, a leader with opposition party Reforma and former constitutional chamber judge, has received messages in Facebook and Instagram that threaten her with rape or death, mostly from male users. “Usually threats come in relation to my critical opinion and comments regarding Sadyr Japarov,” she says.

According to Sooronkulova, political trolling is well organised, with trolls attacking their victims in groups. These accounts are usually fake and linked to Japarov-related groups and supporters. In a video aired on independent media NextTV, Sooronkulova discusses Japarov’s “gangster-style methods” in politics. We found eight open death threats among more than 1,000 hateful comments addressed to the opposition politician.

One indirect indication of how well-orchestrated extremist attacks on social media platforms have been is the manner in which they have shifted along with the political positions of those under attack.

Elvira Surabaldieva and Tilek Toktogaziev were leading critics of Japarov in the aftermath of the rigged elections this past October. Representing a new wave of young politicians and activists, Surabaldieva and Toktogaziev were extremely popular among Kyrgyzstan’s urban middle-class and were a focal point of liberal youth mobilisation during the struggle for power that emerged following the election. As such, they were frequent targets of attacks from pro-Japarov’s trolls. Both were physically attacked during the clash on the central square on 9 October, with Surabaldieva being hit in the face by a pro-Japarov supporter and Toktogaziev being heavily injured in the head by a thrown stone. According to our monitoring of social media, however, ever since they accepted high-profile ministerial positions in the Japarov-led government, the vitriol of online attacks against them significantly decreased.

Bolot Temirov, the founder of FactCheck — an online anti-corruption investigative resource — highlights the link between Japarov’s speeches and online activity, and the intensity of online attacks. “The inaction of government agencies indicate that these things are happening with the complacency of the authorities,” he says.

Saniya Toktogazieva, a constitutional law expert, believes that “Japarov’s words are very divisive. Not only do his supporters write hate speech about political opponents, but Sadyr Japarov himself mentioned several times in his speech that everyone who is going against the constitutional reforms are akmaktar [bastards]”.

Toktogazieva continues: “Essentially, Japarov is dividing Kyrgyz citizens between those who are loyal to him and the rest who are actively against the constitutional reforms, labelling the latter ‘enemies of the people.’”

Omurbek Tekebaev, a leading opposition politician who is considered the father of Kyrgyzstan’s current constitution, agrees that Japarov himself initiates hate speech by directing his followers against his opponents. “They are trying to create an atmosphere of political terror, radicalism, and aggression. This is identical to what happened under [former President] Bakiyev. The only difference is that now political intimidation extends to social media. ”.

In his recent Facebook post, Melis Aspekov, one of Japarov’s closest associates and the administrator of his public Facebook group, has denied allegations of attacks claiming that it is actually “Japarov’s opponents who simulate trolling in order to attack their own opponents”.

The administrators of pro-Japarov Facebook groups, who include Japarov himself, turn a blind eye to the instigation of hate and the intimidation of opponents. Instead, they appear to tacitly encourage both via thousands of extremist comments in order to promote political and social polarisation, which increases tensions between various segments of Kyrgyz society, particularly between a more conservative (and largely rural) population and a more liberal (and largely urban) class.

With this combination of populist language and a climate of impunity, the obvious risk is that a dangerous dynamic may be set into motion, resulting in extremist social media users carrying out their online threats offline.