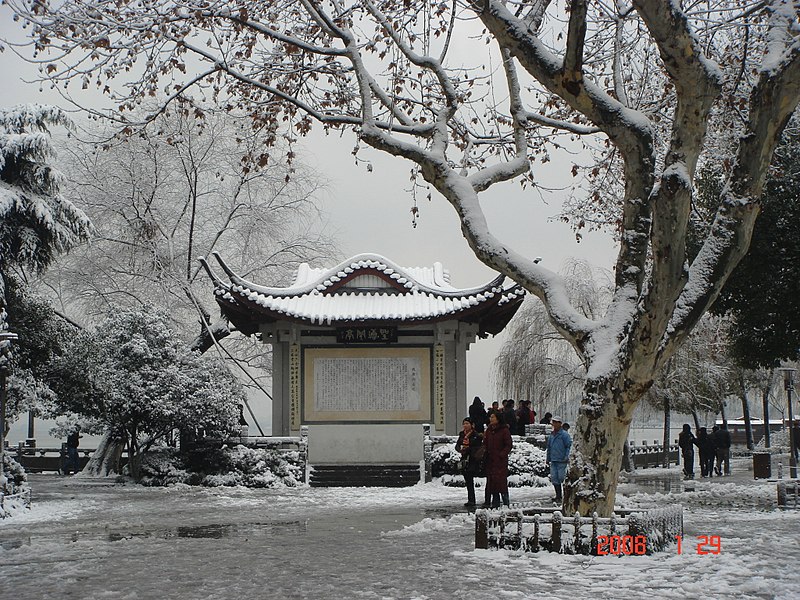 Winter scenery in West Lake, Zhejiang province. By zhiyin586@163.com via Wikimedia (CC: AT)

Winter has come, yet many regions in southern China — including Hunan, Zhejiang and Jiangxi — have recently issued notifications regarding the limited supply of electricity. Because temperatures in these regions could fall to below zero degrees Celsius and some [2] of the affected cities [3] are highly developed, thousands of posts — all discussing how people are struggling — emerged on Chinese social media last week.

While some associated the restriction on electricity usage with China’s recent ban on Australian coal [4], others pointed out that the policy was related to Chinese president Xi Jinping’s commitment to cut carbon emissions [5]. Regardless of the cause, China will likely feel colder than usual this winter, and people are unhappy about it.

Yiwu [2], a city in Zhejiang province that's known for its light industry trade, is among the most affected by the energy restriction policy. Many factories were told [6] to cut 20 to 30 percent of their production capacity, and some must cease operating altogether until the end of December. In addition [6], the majority of the city's street lights have been turned off and the authorities have banned the use of heating system in trading centers, shopping malls, and other public venues such as libraries.

I can understand the majority of the power-cut measures, but turning off street lights at night? What if there are robberies and accidents? We are asked to keep our air conditioning to 16 degree Celsius the highest; do you know how cold the wind is at 16 degree Celsius?

I'm in Yiwu. My landlord just sent me the notification from the street committee. We can’t turn on the heating before 12 am, or else we'll receive a RMB 400 yuan [approximately US $61] fine.

Well, banning heating is one thing. Once they find someone violating the rule, they shut down the lift. Speechless. Isn’t electricity supply a basic responsibility of the government? I pay for my electricity, how could they shut it down? This is insane.

Other cities [7], like Jinhua and Wenzhou (in Zhejiang) and Changsha (in Hunan), have suffered from similar restrictions.

Notifications about the cuts in electricity use were issued amid the trade spat [4] between Australia and China, in which China’s list of sanctions [8] on Australian products include barley, beef, lamb and lobster, wine, cotton, timber and coal.

However, since the amount of Australian coal exported to China amounted to only about two percent [9] of China's total coal consumption in 2019, Hu Xijin, chief editor of the state-affiliated tabloid Global Times, rebuked [10] the association of the energy shortage with China’s ban:

It is nonsense to say that the electricity shortage is being caused by sanctions on Australian coal. The majority of imports from Australia are coking coal and China has huge thermal coal resources. The issue at stake is the organization of coal mining and transportation. The impact of Australian coal imports is not worth mentioning. The talk about us being hurt by our own sanctions is a malicious fabrication of fact by foreign forces, and some from within the country.

Hu stressed that the shortage was temporary: partly due to excessive demand in winter, and partly because of China’s commitment to cut carbon emissions.

Earlier this month, President Xi told the Climate Ambition Summit that by 2030 China would cut emissions per unit of gross domestic product (GDP) by “at least” 65 per cent [5] compared with 2005 levels. However, China's energy supply continues to rely heavily on coal power, and its main strategy for meeting the target is to impose carbon emission quotas to local governments.

Hu Xijin’s explanation was in alignment with a number of investigative reports [7] which pointed out that many governments in southern China had exceeded the carbon emission quotas handed down to them by the National Development and Reform Commission [11], and were therefore compelled to cut energy consumption towards the end of 2020.

Such explanations have attracted more critical comments, since the general feeling is that the commitment to cut carbon emissions should be driven by a shift to clean energy, rather than abruptly shutting down cities by turning off electricity in winter. As anticipated, angry responses [10] followed Hu Xijing’s post:

People’s livelihoods should come first. Diplomacy should serve the people and we should not revert to the policy back in the 1960s, when people starved to death while the country was at war with others just to show its strength.

If the aim is to cut carbon emissions, many entrepreneurs are now using fuel oil electric generators [which have high carbon emissions]. The policy is like taking off one’s pants to fart.