'It is important to [see] women as equals, worthy of respect' 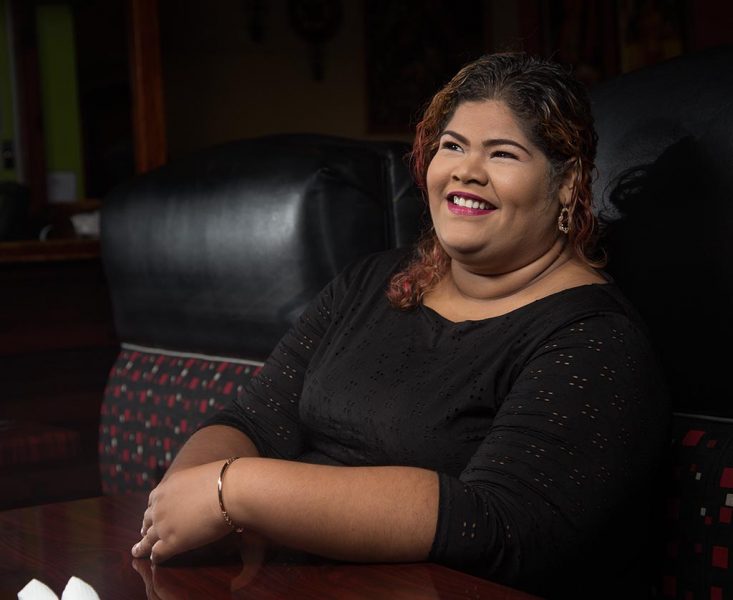 Trinidad and Tobago, which has been grappling with increasing cases of gender-based violence and femicide, is still reeling over the murder of teenager Ashanti Riley, who was stabbed to death after being abducted by the driver of a private hire (PH) taxi on November 29.

Since then, online discussion has been rife over the tendency to victim-blame and put the onus on women to protect themselves, as opposed to focusing on changing the culture and socialisation of men.

One comedian decided to start pushing for that shift to happen in a rather unconventional way. On Facebook, Rhea-Simone Auguste, better known as Simmy De Trini, has published a series of scenarios, presented in local parlance, that play as reverse sexual harassment. The impact of this unexpected role reversal has emphasised the absurdity of what women are made to endure in the hyper-masculine Caribbean culture.

Via WhatsApp, Simmy chatted with Global Voices about the gravity of gender-based violence and why she believes that humour is a good way to jump-start productive public discussion on the issue.

Janine Mendes-Franco (JMF): Was this series inspired by the most recent spate of femicides or is this a theme you have been mulling over for a while now?

Simmy De Trini (SDT): As a survivor of both domestic violence and rape, I have been vocal over the last few years about the injustice women face and the inability of our current system to protect women from harm or worse, murder. The “reverse harassment” posts were not planned. I just got fed up of saying the same things so I switched it up and just started doing sarcastic posts about the situation.

JMF: Each of your instalments has attracted hundreds of likes, comments and shares. What kind of discussion did you want to get going?

SDT: When I realised the first post started gaining traction, the others were done with the hope of sparking discussions about the harassment women experience and the kind of attitudes we encounter that we need men to revisit and review in themselves and their friends.

JMF: Some people seem to be missing the point though.

SDT: The people who did not get it were in the minority and did not have an impact on me continuing. I felt like more people understood where I was coming from so I did not hesitate to keep sharing the posts.

JMF: How disturbing is it to you that most women can identify with some measure of what you speak about in these scenarios?

SDT: Very disturbing but not surprising. In conversations with friends, I have heard so many women talk about these situations with men that I already knew many others would have similar experiences and stories.

JMF: Tell us about your journey to becoming a comedian. Your brand of humour always seems to address serious issues by presenting truths in non-threatening ways. Why is this important to you, and as a woman in what remains a macho society, do you feel a responsibility to provoke thought to a greater degree than a male comedian might?

SDT: I started doing stand-up in 2017, as a creative outlet to help me cope and explore topics that had affected or impacted my life. I have some superficial stuff mixed in but try to explore aspects of mental health and domestic violence prevention and abuse when I can. I don't think much about it in terms of a responsibility but hope my messages sink in for those who can relate.

JMF: How do you tap into this ability to place yourself in the midst of an issue, yet find a way to witness the injustice through laughter?

SDT: I really don't overthink things. If something is going on that I want to talk about, I just do it spur of the moment and from my perspective.

JMF: Is there a difference between Simmy the Trini and Rhea-Simone? How do you draw the line?

SDT: Huge difference. Simmy is a stage name and a different personality. Simmy is loud and funny and all about the public life. Rhea-Simone [is] who I am as a person. I am a loner and like to be in quiet spaces where I can hear my own thoughts. People are usually surprised when they meet me and realise that Simmy can be “turned off,” and that I am mostly serious and able to speak on a range of topics that are not necessarily funny, but hold importance. That's why aside from comedy, I have been trying to do more public speaking and motivational speaking engagements because I enjoy talking to people in different settings.

JMF: You’re the mother of two boys. How is your work teaching them to change what seems to be a pervasive objectification of women in Trinidad and Tobago?

SDT: My sons are being raised to respect and value women. The women around me and by extension them are usually strong, vocal and from different walks of life. It is important to me that they grow up seeing women as equals and worthy of respect.

JMF: What do you want this series to accomplish?

SDT: More dialogue about what we have come to accept as the norm — but in reality is a degradation and devaluing of women — leading to these instances of violence, abuse, harassment or murder.

JMF: How do you think we can begin to solve the problem of gender-based violence?

SDT: Just as there is a sexual offenders registry, we need to have a domestic violence registry for repeat offenders. If you check the background of some of the men who end up murdering a woman in a domestic violence scenario, they sometimes have a clear history and pattern and it was escalating. Counselling for both victims and abusers is necessary to help people with anger management and conflict resolution techniques and strategies. Education is important too. I would love to see a full campaign in the public space that shows a no tolerance aspect for abuse and violence against women.

JMF: What role has social media played when it comes to sharing and promoting your work?

SDT: Facebook, in particular, has been important as it has allowed me to grow a following for my work and opened doors for me to get more work not just as a comedian but as a self-employed journalist and content creator.

JMF: Who have been your greatest influences?

SDT: My mom. My sons. Professionally, as a writer, I was trained by and worked with [journalists] Keith Smith, Deborah John and Angela Martin. In terms of comedy, Wanda Sykes — and I hope to work with her one day.

JMF: Imagine you’re doing a show and your audience is only men. What would you say to them, all jokes aside?

SDT: Women are important to the very fabric of our society. You stand to benefit when you see our value, our contributions and our worth.

Antigua and Barbuda  18 hours ago