He could face life in prison 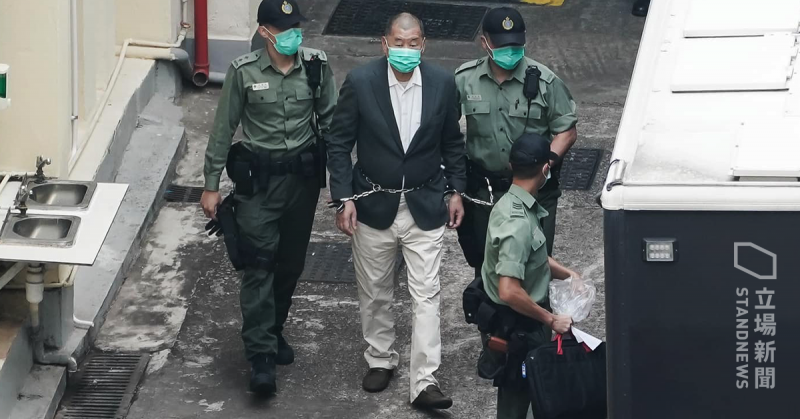 This is an English translation of story originally published in Chinese on The Stand News. It is published here under a content partnership agreement.

Hong Kong pro-democracy media tycoon Jimmy Lai could face life in prison should a court find him guilty of violating the national security law by colluding with foreign forces.

The 72-year-old founder of Next Digital, which publishes the pro-democracy Apple Daily newspaper, was arrested in August when he was charged with fraud over a commercial dispute with a tenant.

Lai appeared in court on December 12, where his application for bail was denied.

Many of those acts, however, took place before July 1, when the national security law was enacted. In June, Hong Kong's Chief Executive Carrie Lam said in a pre-recorded message to the United Nations’ Human Rights Council that the law wouldn't be applied retroactively.

The media tycoon, democratic veteran Jimmy Lai was chained as Class A Felon when he was escorted to appear in court. He faces a charge of collusion with foreign elements to endanger national security because of his tweets and interviews. It’s a speech crime and fabricated charge. pic.twitter.com/5KcTTvBoW4

Allegations built on tweets and interviews

Police documents supporting Lai's charge highlight 18 posts he made on Twitter, where he has over 126,000 followers.

Among them is a retweet of a statement made in July by U.S. Secretary of State Mike Pompeo in which the latter expressed support to pro-democracy candidates contesting Hong Kong's district council elections. On his retweet, Lai thanks Pompeo for the support. In the same thread, Lai says that the international community should “resist China's Communist Party suppression of freedom in Hong Kong.”

The document also points to another tweet that Lai sent in July in which he uses the hashtags #SafeHabourAct and #PeoplesFreedomandChoiceAct — referring to proposed U.S. legislation that would expedite asylum applications from Hong Kong citizens — saying such acts would have a positive effect on Hong Kong's pro-democracy movement.

Also cited as evidence that Lai sought foreign interference in Hong Kong is an August tweet, following the detention by the Chinese coast guard of 12 Hongkongers who were fleeing to Taiwan by boat, in which Lai said: “Can the U.S. government find ways to save these kids?”

The charge sheet also points to Lai’s columns published on Apple Daily News between December 2019 and June 2020 which were titled, for example, “We have to carry on and have hope,” “Absolute dictatorship — where does Xi Jinping’s confidence come from?” and “Suffocating Hongkongers struggle between escape and resist.”

Excerpts of those columns are highlighted, such as “regardless of how many people decide to stay, we will stand up to resist, we will serve as the pillars of the struggle and of the conscience of the society,” and “[Xi Jinping] should know that it is a bad game to implement the ‘wolf-warrior,’ national security law in Hong Kong. He does not want any trouble, but the international reactions to the NSL have brought a lot of troubles to him.”

Nicholas Kristof tweeted that it was “infuriating” to see their conversation being waged against Lai:

This is infuriating: As China throttles Hong Kong, one of the police allegations justifying Jimmy Lai's imprisonment is that he joined a public Web chat with me. I asked Jimmy then if he would get into trouble, and he said he had to speak up for Hong Kong. He's a brave man. https://t.co/whmNROmm4P

The document also cites the launching of the English version of Apple Daily News in June, and the streaming series “Live Chat With Jimmy Lai” on Twitter, as evidence to back the charge.

The document also mentions a series of interviews Jimmy Lai gave to foreign media outlets between May and June, such as Bloomberg, The New York Times, BBC Chinese, and Japanese magazine FACTA.

It highlights an excerpt of Lai's interview to Radio Free Asia on June 10 in which he said: “The U.S should sanction China and then Hong Kong, Hong Kong would eventually benefit from the sanctions (…). Foreign countries should exercise as much pressure on China as possible, followed by sanctions as a means to block the despotic act.”

Independent journalist Rachel Cheung highlighted another excerpt listed by the police in the charges’ document:

In the charge sheet against @JimmyLaiApple for collusion with foreign forces, police listed excerpts of his interviews with media as well as commentaries he wrote, including this op-ed on New York Times, where he asked: pic.twitter.com/8ir6QMFxZ7

HK police is now making @JimmyLaiApple‘s #NSL case as an example of what constitutes speech crime in #HongKong under the new #NSL regime: activity on his Twitter account, live chats with commentators and the founding of an English version of his newspaper. https://t.co/6BlAQuIQ3a

The documents state that Lai met with U.S. Secretary of State Mike Pompeo in July and August 2019, shortly after the anti-China extradition protests broke out in Hong Kong, where they've allegedly discussed possible U.S sanctions on Hong Kong and mainland Chinese leaders.

In August, Lai also met with Samuel Chu, the executive director of Hong Kong Democracy Council, a Washington DC-based organization, as well as four Republican senators in the U.S. capital.

The document also points that LAIS Hotel Properties Limited, a hotel in Canada of which Jimmy Lai is allegedly the main stakeholder, paid $1.47 million (US$189,600) for a pro-protest advertisement in Japanese newspaper The Nikkei, published in August 2019. The advertisement campaign was coordinated by a online advocacy group called “Stand with Hong Kong, Fight for freedom” which has been calling for international attention to the political situation in Hong Kong since the anti-China extradition protests broke out in June 2019.

The acts mentioned above took place prior to the enactment of the national security law.