The Bidoon's decades-long grievances drove many to death 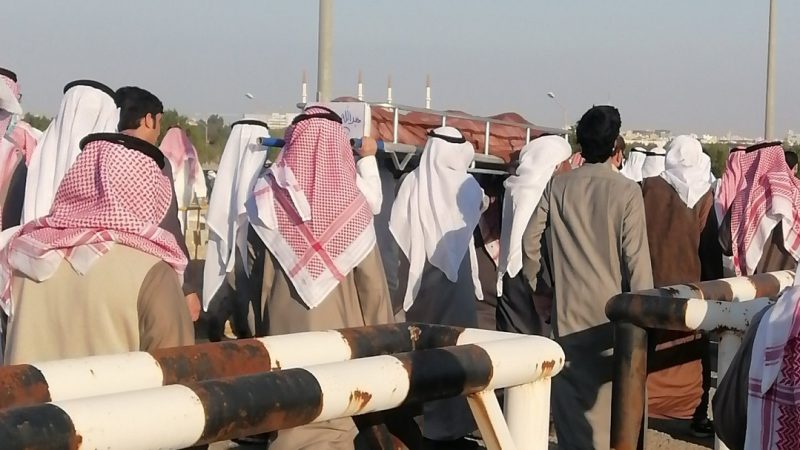 Mourners carry the corpse of a Bidoon man in Kuwait who has died by suicide in December 2020. Photo by Fayez Elfayez. Used with permission.

The suicide of a young stateless man in Kuwait on December 6 has, once again, pushed to the fore the plight of the Bidoon – or “Without,” in Arabic – a stateless population of thousands who lives in the oil-rich country.

The 32-year-old man was arrested on Sunday in Al-Wafrah, Kuwait's southernmost city, after residents filed a complaint to the police against an individual who was throwing stones at passersby.

According to Al-Anbaa, a local newspaper, the man – who was not named in the report – was located by the police and was found to “behave abnormally.” Identified as a convict indicted in other cases, the young man – whose charges were not specified – was detained in order to be transferred to the country’s central prison, the newspaper said.

According to the report, he was found dead hours later in the police station using a rope he created from a blanket he was given in his cell.

In a tweet posted on December 8, the Kuwaiti Ministry of Interior said it ordered an investigation into the man's death:

Security media: Deputy prime minister and minister of interior ordered the formation of an investigation committee to look into reports involving the suicide of a young man (non-Kuwaiti) in the bathroom of Al-Wafrah police station, to identify the circumstances of the incident, and whether there were violations or misconduct in the procedures.

Death by suicide is rife among the Bidoon, a population denied Kuwaiti citizenship in the wealthy country.

Regularly referred to as “illegal residents” by the government, there are officially 100,000 Bidoon in Kuwait, although activists say the population is larger.

Their complex legal situation dates back to the creation of the Kuwaiti state in the 1960s. Having been nomads all their lives, they didn't respond to the nascent authorities’ calls for residents to register themselves as citizens and have since been denied nationality.

Due to their legal status, their access to basic civil and human rights such as health, education, marital, birth, and death certificates, to name a few, is significantly limited.

Although the Bidoon maintain that they are indigenous of the Gulf state, and that a majority of them have had no home but Kuwait all their lives, the Kuwaiti government claims that many are citizens of other states who have abandoned their real nationalities in hopes of benefiting from Kuwait’s generous welfare system.

Following Sunday's tragedy, members of the community and supporters have taken to social media, using the hashtag #انتحار_بدون, or #Suicide_of_a_Bidoon, to express their solidarity and to demand the government put an end to the Bidoon's plight.

The problem that never actually gets a solution done .. They killed him when they deprived him from his rights
" يمهل ولا يهمل سبحانه " #انتحار_بدون_بمخفر_الوفره

In recent years, hashtags like #BidoonLivesMatter and #ICan'tBreath, drawing from African American protests in the United States, have also been used following similar incidents of suicide among this community.

In November, two other Bidoon men died by suicide. Alleged screenshots of a WhatsApp exchange shared on Twitter show one of the men, Zayid al-Asami, telling his son he was “deeply humiliated” and that he had given up all hope and so would take his life.

Since yesterday, this conversation, in all its details and words and all the pain it includes, haunts me. How was the father while drafting [it]? The son's heart while reading? “Deeply humiliated,” “Dad, overcome the devil,” “Take care of yourself” and then “Last seen!”

The other deceased man, Bader Mirsal al-Fadhli, posted a video on Twitter before his death voicing deep frustration at his life circumstances.

Another incident of suicide among the Bidoon took place in May, and a medical student from the community also attempted to take his life in June.

In July 2019, a 21-year-old Bidoon man took his life after failing to get a job because he couldn't provide a state-issued identification card. He, too, was described by the authorities as a “convicted criminal” and a drug abuser.

That death triggered protests by members of the Bidoon community, who demanded the government take a corrective action to mend their status. Fifteen protesters were detained by the authorities on that occasion, including prominent activist Abdulhakim al-Fadhli.

In a statement issued at the time, Amnesty International said:

These arbitrary arrests primarily targeting peaceful protesters, activists and human rights defenders in Kuwait are not only unlawful, but are only set to exacerbate an already tense situation brought to the fore by the young man’s suicide.

To protest their arrest, the jailed Bidoon activists staged a hunger strike while in prison, lasting for 12 days, and only interrupted by the deteriorating health of some of them. Despite calls on the Kuwait government to release the peaceful protesters, they remain in jail to this day.

It is unlikely that the much-prolonged issue of the Bidoon will be handled by Kuwait's newly elected parliament, as dozens of past assemblies have fallen short of finding a solution. Veteran politicians have often used the plight in electoral campaigns, but once elected offered little to the community.

I hope certain parliament and governmental members sleep at night knowing their inactivity to this major problem will be judged greatly on the day of judgement!#انتحار_بدون_بمخفر_الوفرة