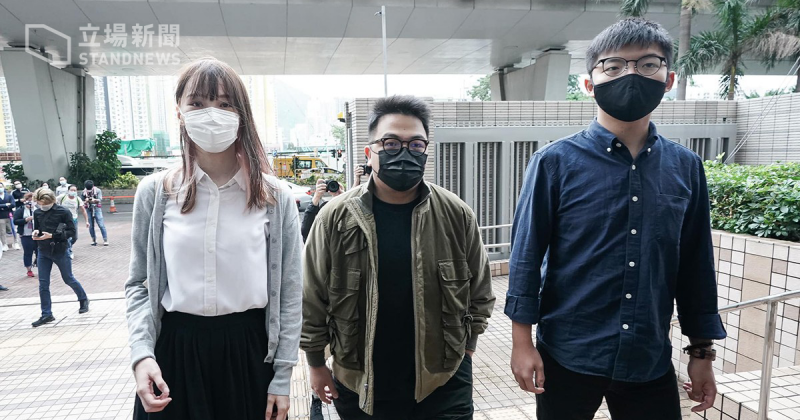 Prominent Hong Kong activists Joshua Wong, Agnes Chow, and Ivan Lam were sentenced to prison [2] on December 2 on charges of organizing an unauthorised protest against police brutality outside the police headquarters in June 2019.

Wong was sentenced to 13.5 months, Chow to 10 months, and Lam to 7 months behind bars. The trio pleaded guilty to the charges last week [3] in their first trial and had been in police custody since, as the court rejected their bail applications.

Via his lawyer, Wong tweeted:

#JoshuaWong [4] 13.5m in jail – via lawyers, “it’s not the end of the fight. Ahead of us is another challenging battleground. We’re now joining the battle in prison along with many brave protestors, less visible yet essential in the fight for democracy and freedom for HK. pic.twitter.com/1ZGmfUDf7k [5]

Chow burst out into tears in court as her application to be released on bail until an appeal was denied. The activist celebrates her 24th birthday on December 3. Her social media acquaintances tweeted:

Dec 3 is the birthday of #AgnesChow [7], she's ill these days during detention, but she doesn't have the chance to go home and celebrate her 24th birthday with family now? pic.twitter.com/4UO9gGfE4H [8]

Agnes Chow is spending her first night in prison, for the “crime” of standing outside a police station during a protest against police brutality.

Something achingly sad about the Twitter balloons for her 24th birthday floating over the tweet announcing her 10 month sentence. pic.twitter.com/vVSQOBBSwc [10]

Exiled Hong Kong activist Nathan Law made plead for international solidarity with his three friends, and urged Washington to keep the pressure on China in regards to Hong Kong:

4. Sentences could pile up. To be honest, I have no idea when the trio could step out of the prison if Beijing pledges to impose the hardest charges on them arbitrarily. Please support them and offer them encouragement, to remind them that they are not alone.
-END

Washington must craft a China policy that puts human rights front and center, but without neglecting the urgent need, too, for environmental protection, greater respect for labor rights and fair trade.

The Inter-Parliamentary Alliance on China (IPAC), a cross-party group of legislators primarily from European and North American countries focused on relations with China, issued a statement condemning the sentence:

We stand in admiration of the courage and determination shown by the three individuals sentenced and offer solidarity to all Hong Kong people during this dark time. pic.twitter.com/Nc2ZH6j3xc [16]

The punishments given are illegitimate and wholly disproportionate with the actions that the Hong Kong authorities claim to be crimes.
This sentence has made a mockery of the rule of law in the city and demonstrates the continued determination of the Chinese government to deny Hong Kong citizens the fundamental freedoms promised to them in the hong Kong Basic Law and Sino-British Joint Declaration. […]

As 3 Hong Kong activists begin prison sentences, I urge the Hong Kong and Beijing authorities to end their campaign to stifle opposition.

Prosecution decisions must be fair & impartial. Rights and freedoms in Hong Kong must be upheld. https://t.co/4jOwbQFOYQ [18]

I'm saddened by the news that @joshuawongcf [20], @chowtingagnes [21] & Ivan Lam have been jailed for their activism. These brave young people are symbols of freedom & democracy in #HongKong [22], values that we will never stop fighting for. pic.twitter.com/DLFf024cJU [23]

Today’s sentencing of Joshua Wong, Agnes Chow, & Ivan Lam in #HongKong [22] for supporting pro-democracy protests is despicable. I had the pleasure of meeting with Joshua in DC in Sept. 2019, & will continue to support the aspirations of the Hong Kong people. https://t.co/Ipyb2BU7Dv [25] pic.twitter.com/AHmZkgqpe2 [26]

Hong Kong crackdown on dissent, from the passing of the National Security Law at the end of June to the jailing of Joshua Wong, Agnes Chow and Ivan Lam on Dec 2@AFP [28] pic.twitter.com/xoBMYIVhfm [29]