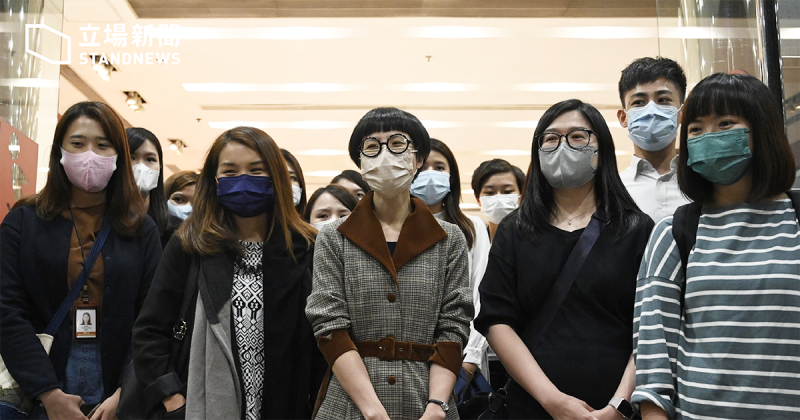 Several journalists handed in their resignation letters in protest against i-Cable's mass firing of newsroom staff. Image by the Stand News. Used with permission.

Over a dozen journalists resigned on December 1 from Hong Kong Cable Television Limited, a major subscription-based TV station in Hong Kong, in protest after the media company fired 40 editorial staff in what is perceived as a political crackdown.

Those laid off include the head of the China desk and the entire team of the award-winning News Lancet program. The broadcaster cited financial reasons for the layoff, a claim the newsroom staff rebukes.

The entire China desk, a total of 12 people, has since resigned in protest, along with the heads of the international and finance desks and the newsroom's chief assignment editor.

Also known as i-Cable, Hong Kong Cable Television Limited is known for delivering high-quality investigative reporting about both Hong Kong and the mainland. At the time of the COVID-19 outbreak in Wuhan, it was the only Hong Kong outlet with correspondents in the city. The newsroom has also been praised for its coverage of the anti-extradition protests in 2019-2020.

News Lancet has investigated various incidents of police brutality during the protests, including the Yuen Long subway mob attack on July 21 last year. The program's most recent episode, aired on November 24, focused on questionable opinion polls conducted by pro-Beijing research firms. One of the firms admitted that it had used WeChat, a social media platform widely boycotted by pro-democracy Hongkongers, for collecting responses.

The layoffs were sudden and took immediate effect — those who were sacked were told to leave the office on the same day. In shock, members of staff gathered outside the room of the news director demanding an explanation. @galileocheng posted photos of the moment:

Among those laid off is Wong Lai-ping, former deputy news editor at the China desk. On a radio interview aired on December 2, she rebuked the management's claim that the decision was made out of financial difficulties, remarking that  in August, the management fired the then-executive director Fung Tak-hung and replaced him with four new managers.

To fire one Fung Tak-Hung in exchange for four senior management? How could the add-up salary of the four be more than Fung’s salary?

Wong said that the new management often made editorial requests, such as live broadcasts of China's foreign minister regular press conference, or modifying headlines. According to Wong, the newsroom staff refused to comply with such requests.

The Hong Kong Journalists Association commented on the layoffs:

Given the [New Lancet] team’s coverage of the police and the administration, it’s difficult not to see this as minimising sensitive reporting in the name of cost-cutting.

Now with the loss of News Lancet and to-be loss of iCable China News, the remaining investigative TV news programmes in HK are:

Cartoons and memes criticizing the layoffs were widely shared too:

The lay-off is obviously political. The journalists and the team used to report China's corruption and lies. #CCP doesnt want people to know the truth, and the lay-off turns i-Cable TV into one of those China propaganda machines. pic.twitter.com/V2oNvl8Re1

Credit: Ah To “Who is scared of Lancet?”