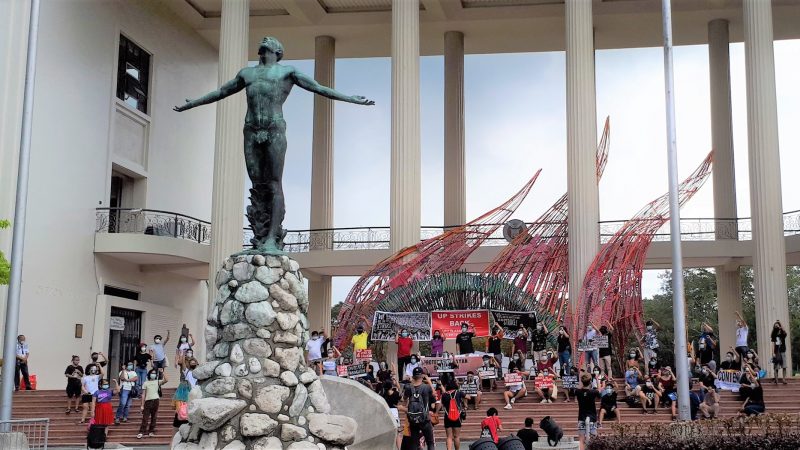 Students, faculty, and education workers gathered last November 16, 2020, to declare a strike at the University of the Philippines. Photo by All-UP Academic Employees Union, used with permission.

In the wake of successive typhoons that hit the Philippines in November, student protests have erupted in some of the country’s top universities to condemn what they call the “criminal negligence” of the government’s disaster response. President Duterte has also been criticized for his absence from the public eye when the typhoons caused massive devastation in several regions of Luzon Island.

Student strikes and calls for academic breaks are aimed at helping students affected by the typhoons to recover and allow the re-channeling of their energies from remote classes to relief operations and protest actions.

The student strike wave in the Philippines began at the Ateneo de Manila University, an elite Jesuit-run institution, where 150 student strikers called on their fellow students to not submit academic requirements until the “national government heeds the people’s demands for proper calamity aid and pandemic response.”

This initial number multiplied to hundreds of signatories just a day after the strike paper was first circulated online on November 14.

ADDENDUM: As of press time, the statement and list of signatories are only accessible with an OBF email account.

Read the full statement included in the petition here: pic.twitter.com/CLceyBpUqp

In the week that followed, students from other universities and colleges also expressed their demands to stop classes with students from the De La Salle University, another exclusive Catholic school, demanding that “either the national government act now or step down.”

Professors from the University of the Philippines (UP), the country’s premier state university, under the umbrella of the Congress of Teachers and Educators for Nationalism and Democracy, joined the strike calls:

We halt our classes and academic work to amplify our call for justice and for the ouster of Duterte.

The UP Center for International Studies also concluded classes in solidarity with the student strike movement:

My academic unit is now officially one with the Academic Strike! Here's our position. #YouthStrikePh #OneBigStrike pic.twitter.com/P7GDAPV2p2

A statement by concerned UP faculty calling for the end of the semester contended that the abrupt shift to online learning because of the COVID-19 pandemic had been encumbered by problems from the very beginning. The statement claims there had been no significant state support for students lacking access to devices and stable internet connectivity while anxiety and economic hardships have left an impact on student mental health. It goes on to say that these problems have been compounded by the devastation caused by the recent typhoons and floods in many provinces, including parts of the densely populated national capital region. 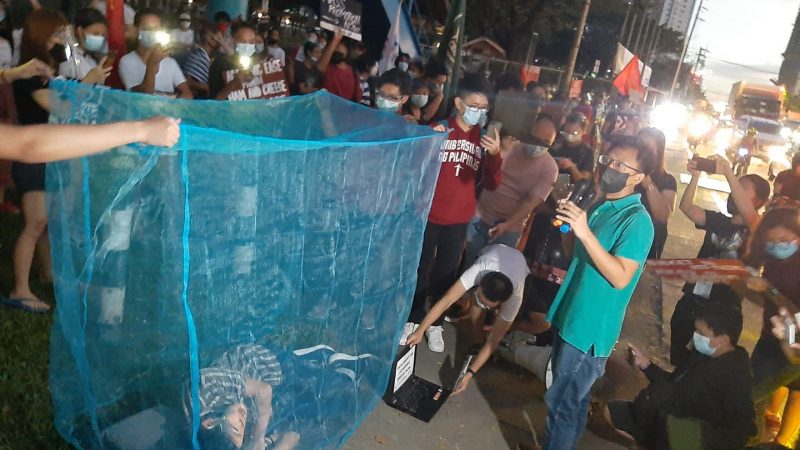 Student strikers outside of Ateneo de Manila University, Quezon City re-enact the satirized image of a sleeping Duterte to emphasize his inaction in the face of the COVID-19 pandemic and devastating typhoons. Photo by the Congress of Teachers and Educators for Nationalism and Democracy, used with permission.

The Duterte government has responded by denying any problem caused by the pandemic and recent typhoons on the education system while branding the strikers as “enemies of the state”. Reacting to the strike action in another of his late-night televised speeches, Duterte himself threatened to defund the University of the Philippines which he labeled as a “training ground” of armed communist rebels.

Anti-communist organizations composed of parents organized and coordinated by the Duterte government picketed UP, Ateneo, and other major universities around the national capital against the student strikes.

This took place in the context of accusations that the Duterte government is systematically campaigning to red-tag or link civil society organizations as part of a communist-led armed underground movement in order to legitimize the repression of rights advocates.

But dissent has not been cowed by the Duterte government’s red-tagging. Thousands of protesters gathered at University Avenue on the UP Diliman campus on November 30 on the occasion of the 157th anniversary of Andres Bonifacio‘s birth. Bonifacio is the founding leader of the 1896 Philippine anti-colonial revolution against Spain.

Traditionally a hotbed of protest, the UP campus in Diliman, Quezon City served as a hub for relief operations and protest activities throughout the month of November. 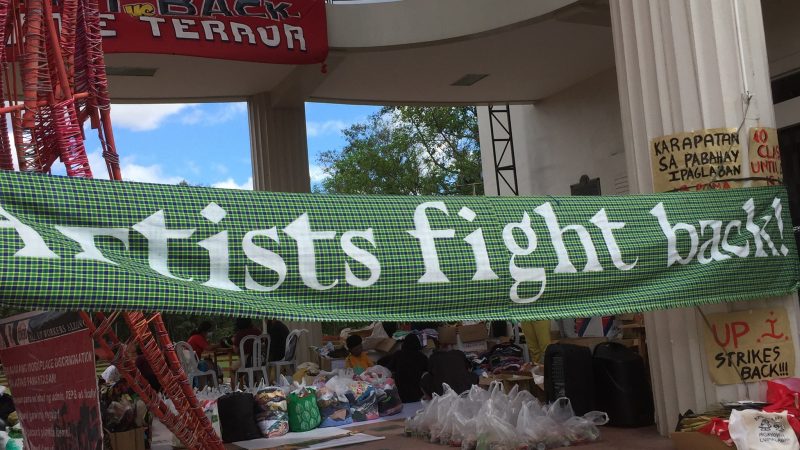 The Quezon Hall building in UP Diliman served as a protest and relief operations center in November 2020. Photo by All-UP Academic Employees Union, used with permission.

On November 23, Ateneo students penned a full-length strike manifesto detailing their demands. They were able to secure a commitment from their university administration reaffirming the right to protest and avoiding the imposition of penalties to striking students. Over 800 Ateneo alumni also came out in support of the strike.

This is a VICTORY for the brave students who risked themselves by striking against state criminal negligence amid pandemic and disaster!

Edgar Jopson, himself an Atenean student leader turned militant workers’ strike organizer, would be proud of you all today.#YouthStrikePH https://t.co/DndalX7Zz6

Contrary to conservative naysayers, strikes are in-themselves education processes happening outside the formal classroom setting where participants are taking direct action through relief work, immersion in impoverished communities, and collective action in solidarity with other sectors against social injustice. This counteracts the dog-eats-dog neoliberal orthodoxies of rugged individualism and resiliency narratives.

The Philippines has a long history of student activism, which particularly gained prominence during the dark years of the Ferdinand Marcos dictatorship. Next year is the 50th anniversary of the Diliman Commune, a historic event when students supporting striking jeepney drivers barricaded UP Diliman and declaring it a liberated zone from February 1-9, 1971 in response to military incursions in the campus.

With only 2 weeks left until the end of the academic semester, student strikers from Ateneo and UP are hoping their example will snowball and inspire strikes and protests in different universities and colleges across the country.

Disclosure: The author teaches at the University of the Philippines Diliman and has expressed solidarity with the struggles of the striking students.