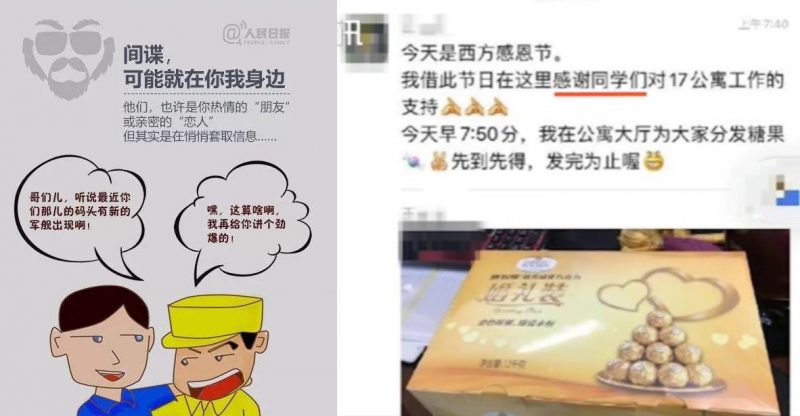 Screenshots of a 2019 ad for China's National Security Day (left) and the group chat that led to the Thanksgiving controversy on the Harbin University of Technology in 2020.

What seemed like a harmless gesture by a dormitory supervisor in a campus of Harbin Institute of Technology, a university located in Heilongjiang province, sparked an uproar on Chinese social media after a student interpreted the act as “Western” propaganda.

In a screenshot of a group chat that went viral, dormitory manager Wang says that, for the occasion of the United States’ holiday of Thanksgiving (celebrated this past Thursday), she was going to distribute chocolates to students. It would be her way to express gratitude to those who had been supportive of the dormitory's management team, Wang said in the chat.

A few minutes later, a student in the group replied:

The propagation of such Western festivals is very inappropriate for dorm assistants, particularly in Harbin University of Technology. As a representative of the school authorities, haven’t you considered the adverse effects of organizing celebratory activities for Western festivals? Please stop such activities or I will report the incident to the authorities in the school.

Wang promptly apologized. The screenshot of the exchange was shared widely on Chinese social media, in which a discussion over both parties’ behaviour ensued. While some have defended the student, others have accused him of “political bullying” towards a “kind grassroots worker.”

On November 27, in an attempt to cool off tempers, the university administration posted on its official Weibo account a statement supporting both the dormitory supervisor and the student who threatened to report her:

After an investigation, [we have found that] the dormitory supervisor's decision to distribute chocolate was an act of kindness, and the student’s words on the chatroom was a friendly reminder. The school will not encourage religious Western festivals on campus and is determined to prohibit religious activities on campus.

The school's statement received backlash for not defending the supervisor enough. Angry comments poured in the comment section of the school's Weibo post:

How can you describe a threat to report as a “friendly reminder”?

The dorm lady serves you all year long and she takes the Western festival as an opportunity to express her thanks. Anyone with a bit of conscience would not do such a wolf-like act. The school authority should not step in to defend the student, this has nothing to do with the Western festival.

Sunday is a Western thing, you shouldn’t take a day off, right?

I used to live in the number 9 dorm and auntie Wang was our dorm supervisor. She is such a nice person, gave us rice dumplings on Dragon Boat Festival, mooncakes on Mid-Autumn Festival, sweet rice dumplings on Lantern Festival. What’s wrong with chocolate on Thanksgiving? The student is just finding an occasion to perform his political duty. It’s a shame that the university has this kind of political animals in it.

The side-effect of patriotic education is just starting to emerge.

A bunch of bastards at Harbin University of Technology. You want to boycott western Thanksgiving, look at your cirrcumulum, advanced mathematics, physics, natural science, all are Western, why don’t you boycott these? Why don’t you study the Chinese classics?

I am a student from Harbin University of Technology, anyone pls tell me where to report on Xi Jinping?

Chinese culture as a matter of national security

In 2013, the government instituted April 15 as “National Security Education Day.” Students are actively encouraged to report dissenting behaviour by teachers and fellow classmates to school authorities. In the past, President Xi said in a speech that ideology is a “matter of life and death” for the survival of China's Communist Party.

In 2019, the campaign slogan of the national security education day was “there could be spies in your circle.” and it encouraged citizens to report suspicious acts by their acquaintances to the authorities.

In recent years, several Chinese universities have banned Christmas decorations, for example. While it is still common in China for people to hold social gatherings during the Christian holiday, some fear that, as restrictions tighten, social acceptance of such celebrations will also diminish — as exemplified by this year's Thanksgiving debacle.

Indeed, in the social media platform Douban, which is popular with art enthusiasts in China, some users suggested that the dormitory supervisor could be a spy.

The [university's] official post resulted in a backlash. It is good to see that popular opinion is not led by the university authorities, as many students and alumni have spoken out against that shameless act [the student's threat]. On the other hand, on Douban, I have seen comments suggesting that the dormitory lady was sponsored by foreign anti-China forces. It is such a confusing world.

The comments on the screenshot say:

Universities related to the military industry have to be very careful about ideological matters. Harbin University of Technology is leading in the development of aerospace technology, it is good that they are being sensitive so that their graduates won’t be stupid enough to leak state secrets or act as spies.

The old lady acted strange. Very few people would celebrate Thanksgiving in China. Her act gives off the impression that she was about to preach.