The cards feature a prominent figure of daily life in early post-war Japan: the American soldier. 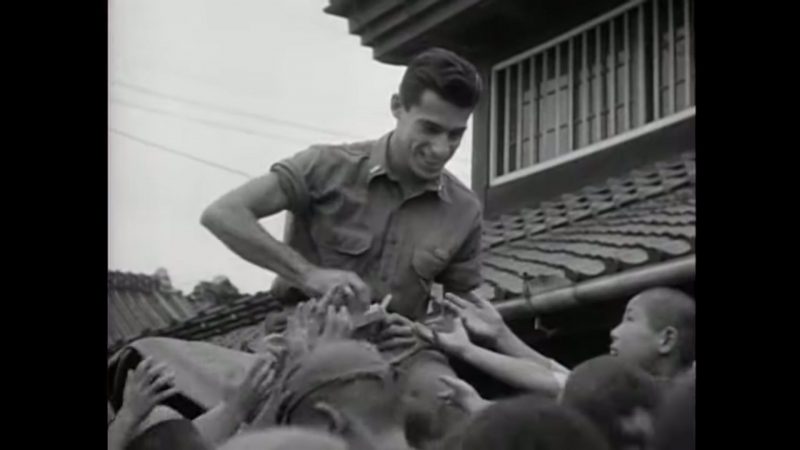 “It is with the children of any foreign country that the American soldier first makes friends.” A U.S. soldier hands out candy to Japanese children early on in the Allied occupation of Japan. Screencap from “Japan: Our Far East Partner Department of Defense. Department of the Army. Office of the Deputy Chief of Staff for Operations. U.S. Army Audiovisual Center. (ca. 1974 – 05/15/1984).” Public domain, hosted on YouTube by Nuclear Vault.

A chance find in Japan provides a glimpse at how children experienced the country's post-war occupation.

Author and broadcaster Matt Alt tweeted on November 21 that he had discovered a set of karuta (playing cards) dating back to the Allied occupation of Japan, likely just following the end of the World War II. He told Global Voices that he found the set while browsing at the popular Kobo-ichi monthly flea market in Kyoto,

Used in menko, a traditional Japanese card game played by children, the vintage playing cards feature what was arguably the most prominent figure of daily life in early post-war Japan: the American soldier.

I found a rare set of karuta (collectors’ cards) with US military motifs printed by a Japanese toymaker during the Occupation (1945-1952). With toys scarce, kids began to idolize US soldiers; the first English words many learned were “hello,” “give me chocolate,” and “Jeep.” pic.twitter.com/lO8LSD3cnF

Originally from the United States, Alt is the former host of popular NHK television program about Japanese pop culture Japanology Plus. He is also the author of a popular new book, “Pure Invention: How Japan’s Pop Culture Conquered the World“, and, with Hiroko Yoda, the author of a popular series of books about Japanese monsters called “Yokai Attack!“. Yoda and Alt recently translated 12,000-plus pages of Doraemon, one of Japan's most beloved manga series.

Following the country's defeat in August 1945, Japan was occupied and governed by Allied forces until 1952 (the islands of Okinawa would be governed by American forces until 1972). The U.S. military played a prominent role in the occupation of Japan.

While occupation forces had first sought to demilitarize Japan, the devastation, starvation and social upheaval in the country quickly turned soldiers into nation-builders. In a war-shattered country, American soldiers offered chocolate and candy, and became an omnipresent part of local life as they directed traffic, stood guard outside public buildings, or distributed relief aid.

That is probably why occupation forces were featured in children's card games.

Also known as “menko,” they often featured numbers on the back that seem to have represented the “power” of the given card in schoolyard games. A precursor of even more popular card games to come, like Pokémon. pic.twitter.com/t9pPTvOUHj

Some cards featured even more noteworthy icons recognizable to everyone around the world.

I don't think I've seen a MacArthur (perhaps that would have run afoul of censors?) but I have seen other military motifs, such as generic generals, bombers, artillery, and even nuclear weapons. PTAs were none too pleased by this stuff. pic.twitter.com/rDWUTNZbPk

NOTE: The “PTA” would be the “parent-teacher association”, which still plays an important local community role in education in Japan.

Karuta card games have a centuries-old history in Japan. Video game juggernaut Nintendo is itself famous for getting its start with card games and other novelties for children. Tarin Clanuwat, a researcher and computer scientist specializing in character recognition, machine learning and Japanese literature (and better known as @tkasasagi on Twitter), recently posted a series of tweets that investigated the history of Nintendo and playing cards:

Photo of Nintendo headquarters in Kyoto in 1889 (Meiji era) when it’s just established by a Karuta card craftsman Yamauchi Fusajiro. The word Nintendo is commonly assumed to mean ‘leave luck to heaven’, but there are no historical records to validate this assumption. pic.twitter.com/8AqCdMafVI

For a detailed look at the history of card games in Japan, the former Mitsuke School in Iwata, Shizuoka prefecture, features an extensive collection:

There’s a great museum/Old elementary school in Iwata-Shi that had a bunch of these on display. I have more photos but replies are 1 per tweet ??? pic.twitter.com/EaArc2jbjq