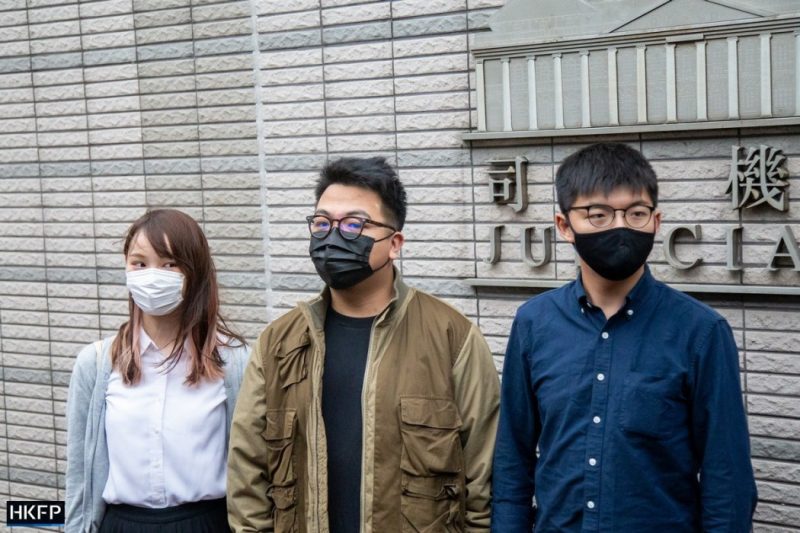 On November 23, Hong Kong pro-democracy activists Joshua Wong, Agnes Chow and Ivan Lam were remanded in custody [1] after pleading guilty to charges of inciting and organizing an unlawful protest in June 2019.

The protest in question took place at the beginning of the anti-China extradition movement when the demonstrations were largely peaceful. The charge carries a penalty of a maximum of five years in prison. A court is expected to hand out sentences on December 2.

The trio, all former members of the now-disbanded political party Demosisto, faces a number of different charges. Wong, along with 23 other activists, is also being prosecuted [2] for participating in this year's candlelight vigil in tribute of the victims of Tiananmen Square, an assembly the authorities also deemed unlawful. Wong was released on bail.

Chow was arrested on August 10 on charge of “inciting secession” [3] under the National Security Law. She was also released on bail.

The unlawful assembly charge is based on Hong Kong’s Public Order Ordinance, which requires protest organizers to notify the police, with at least seven days notice, of demonstrations of more than 30 people. Organizers must also as obtain a “notice of no objection” from the authorities before going ahead with the demonstration. The law has been criticized [5] by international NGO Human Rights Watch for imposing “excessive restriction” to rights of assembly.

Hong Kong's Department of Justice has historically refrained from using the law to prosecute protesters. That changed in 2014, when massive pro-democracy demonstrations broke out. In 2017, leading figures of those protests Benny Tai and Chan Kin-man were sentenced to 16 months in jail under the ordinance.

Wong was also among those prosecuted in relation to the 2014 protests. In 2019, along with 19 others, he was sentenced to two months in jail for “contempt of court” after failing to comply with a court order to clear the Umbrella protest camp in Mong Kok five years earlier. Wong's release [6] from prison in June 2019 coincided with the beginning of the anti-extradition protests that year.

Ivan Lam [7] and Joshua Wong met in elementary school. In 2011, at age 16 and 14 respectively, they founded the student activist group Scholarism, whose stated objective was to reform the school curriculum against “patriotic education.”

Agnes Chow joined Scholarism in 2012, when the group led a massive protest against the introduction of National Education in elementary education. Scholarism grew in prominence and became a key organization in the pro-democracy protests of 2014.

As Lam reached the age of 18, he began facing harsher persecution and punishment in comparison to his fellow activists. In 2017, he was sentenced to 13 months in prison for participating in a protest against a developmental plan in Northeastern New Territories.

After the 2014 protests, Scholarism morphed into the political party Demosisto. The party fielded Nathan Law as a candidate to the Legislative Council in the 2016 elections. At age 23 at that time, Law became the youngest-ever elected member of the Hong Kong legislature.

But Law was eventually unseated [8] following an unprecedented ruling by Beijing's Standing Committee of the National People's Congress (NPCSC) that targeted a number of pro-democracy legislators. When Chow attempted to run with Demosisto's to Law's vacant seat in a by-election in 2018, she was disqualified [9] as well.

Demosisto disbanded on June 30, one day before the National Security Law came into force. Law has since left Hong Kong for London, where he continues to engage in international lobbying.

Chow, Wong and Lam have long been regarded as symbols of the generation of Hong Kong activists who have come of age after the handover of the island to China in 1997, their prosecution encapsulating the blows Beijing has delivered to Hong Kong's dreams of democracy and freedom. As Agnes Chow put it before she attended the court on November 23:

The future of the society is deprived, so as mine too.

10/ Cages may lock up our bodies, but never our unwavering souls. One day our indomitable will return and make us assemble again. pic.twitter.com/iBIXzsDcUw [17]

HK youth & students have sacrificed nearly everything to fight against tyranny & protect HK freedom. Their future is dependent of HK future, HK ppl will never give up. Hope all freedom loving countries would help HK & themselves to sanction & eliminate CCP, liberate HK.

#HongKongers [20] truly respect your courage and perseverance since you led the protests against National Education in 2012. Even if you may be sentenced to imprisonment tomorrow, you still try to bring our protests to the next stage.