"What’s the use of jobs if our homes are flooded?" 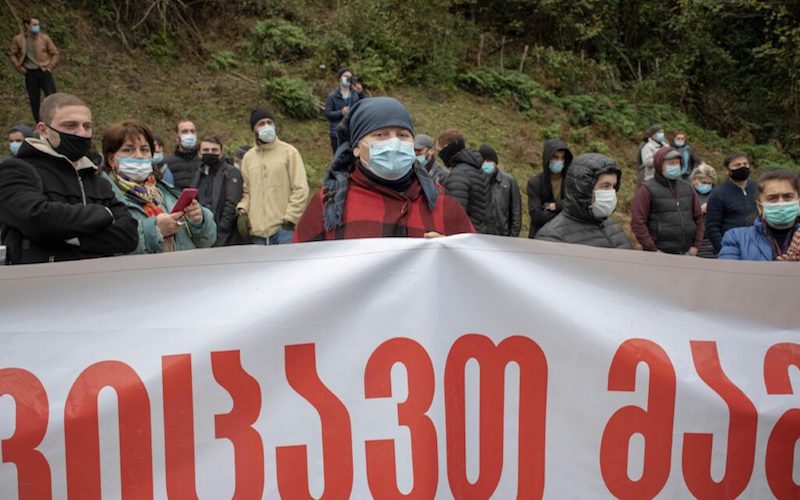 A protester in Zhoneti stands behind a Georgian-language banner reading ‘we are defending our homeland’. Photo (c): Shota Kincha / OC Media. Used with permission.

A planned US$800 million hydropower project in the Tskaltubo and Tsageri municipalities, the largest in Georgia, is meeting resistance from residents of the Rioni River valley.

On 22 November, opponents of the Namakhvani HPP Cascade Project gathered outside the offices of Enka Renewables in Zhoneti, a village 20 kilometres north of Kutaisi, the capital of the western province of Imereti. They demanded that the company drop their plans to construct the dam.

“We have been protesting for the last three years, but we’ve now moved to a more active phase by camping out here for the last 29 days”, Varlam Goletiani, a 27-year-old local activist told OC Media, before saying the Lord’s Prayer together with other protesters and marching towards the company’s office nearby in Zhoneti.

During the demonstration, protesters claimed that the police prevented some supporters from joining them.

Activists have also been critical of the Environmental Protection Ministry for rushing through public discussions on the project.

“Two years ago, those of us who had questions over the project were just barred from entering the discussion venues, these were the rampant violations”, Varlam Goletiani told OC Media.

On November 22, Georgian Public Defender Nino Lomjaria joined critics and reminded the authorities that participating in the decision-making process on projects with an environmental impact was enshrined in the constitution.

The Namakhvani HPP project would include two dams with a planned combined capacity of 433 MW. The government says this will produce 1514 GWh of electricity per year, over 12% of the country’s electricity consumption.

Zhoneti, a recent epicentre of protests, would primarily be affected by the 333 MW Lower Namakhvani dam and power plant, which would include a 4.4-kilometre tunnel engulfing the River Rioni.

A 2019 environmental impact report by Tbilisi-based agency Gamma Consulting, a group criticised by some green policy advocates for approving unsuccessful energy projects in the past, confirmed that the project would submerge three villages as well as lands used by residents of two other villages in Tskaltubo Municipality.

Additionally, the Lower Namakhvani plant would isolate two more villages, causing the resettlement of a total 297 households in the Tskaltubo Municipality.

“The government does not feel responsible to tell their own population why they are going to build this HPP, why the people have to leave their homes and become migrants in their own country”, Giorgi Ptskialadze, Secretary-General of the Mtsvaneebi (Greens) group, who was present at the rally, told OC Media.

He said that the government pursuing hydropower powerhouses instead of wind or solar energy ‘raised many questions’.

Opponents have also warned against the impact on people’s livelihoods along the Rioni River valley, including damage to the region’s tourism, biodiversity, cultural heritage, and a threat of the whole region.

Residents of Tvishi, a village in Tsageri Municipality in the historical Lechkhumi region, as well as experts, have raised concerns over the project’s impact on wine production. They say local microclimate zones for vineyards growing the local Tsolikauri and Usakhelauri variety of grapes could be directly affected.

Green Alternative, a watchdog group critical of hydropower projects in Georgia, warned last year that going forward with the project in a seismically risky area would ‘definitely endanger human life and property rights’.

The Ilia State University-based Institute of Earth Sciences said in 2019 that in the event an earthquake damaged the 105-metre dam close to Zhoneti, it could trigger a 34-metres wave hitting Kutaisi city in 19 minutes, and that the flow could also flood 18 municipalities in western Georgia.

“Basically, Kutaisi and the whole Kolkheti [lowlands] is going to be submerged… We are talking about 35-metres high wave!”, Tinatin Mardaleishvili, a 56-year-old process engineer, told OC Media.

Enka Renewables, the company responsible for building the Cascade, have claimed that they are currently at the stage of ‘preparatory work’ in Zhoneti.

The company did not respond to OC Media’s inquiry over what they meant by ‘preparatory work’ or if they planned to meet with local residents who were unhappy with the project.

On November 14, a week before the latest demonstration, police broke up a protest by Saving Rioni Valley, a local grassroots movement, after residents from Zhoneti and nearby villages blocked the motorway connecting Kutaisi with the North. They demanded the company vacate the area and withdraw their construction equipment.

Protesters, which included women, children, and the elderly, chained themselves to each other blocking the road. Several said they had been injured as a result of the police response.

Police also confronted activists on October 29 but were unsuccessful in stopping them from erecting a large cross on the spot where the company was attempting to begin construction.

The heavy-handed response from police on November 14 as well as the government’s overall vetting of the project was criticised by several Georgian rights groups including EMC and GYLA.

In a joint statement on November 19, a group of Georgian scholars also condemned what they called the ‘language of force’ used by the government against protests. They urged the authorities to ‘abandon the role of a lobby for the investor’ and to rethink the country's energy policy instead.

Speaking to OC Media on November 22, protest organiser Varlam Goletiani said that they had ‘got used to statements like this’.

“What does that mean? We had specific questions, there’s a lawsuit filed against it now… You say something specific and they say ‘the project is important'”.

The ministry has also said that construction of the project would employ 1,600 Georgians.

Responding to this, Ramaz Tskhakaia, a war veteran from the town of Martvili who joined the November 22 protest told OC Media that jobs were of no use if they lost their homes. “What’s the use of jobs if we are flooded?!”

One of the appeals against the project still pending was submitted to Tbilisi City Court by the Green Alternative in April.

The group disputed a February 28 decision by the Georgian Environmental Protection Ministry to greenlight changes in the project to expand the capacity of the Namakhvani-Zhoneti dam. Green Alternative argued that a new environmental and social impact assessment needed to be conducted for the changes.

Neither the ministry nor Enka Renewables responded to a request for comment.