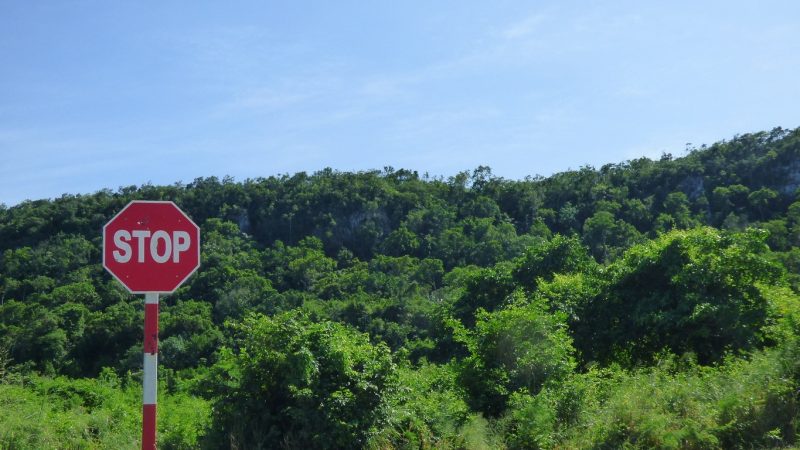 A Stop sign located at the edge of the Puerto Bueno forest area along Jamaica's north coast. Photo by Wendy Lee, used with permission.

A decision by Jamaican Prime Minister Andrew Holness in favour of a limestone quarry in an ecologically sensitive area has provoked an angry backlash [1] among environmental advocates, tourism stakeholders [2] and several sectors of civil society.

It has also sparked an energetic social media campaign by a group of young, passionate activists: #Youth4PuertoBueno [3].

In May, the National Environment and Planning Agency [4] (NEPA), the regulatory body that issues environmental permits, denied permission to Bengal Development [5]/Jamaica World LLC for the purpose of limestone quarrying. Its antecedent — then-called Diamond Property Development Company — was reportedly [6] owned by the son of the late Vivian Blake [7], who had applied to mine the area in 2010. Blake was the leader of Jamaica's infamous “Shower Posse” [8] gang.

This most recent application for quarrying the Puerto Bueno Mountain, a largely pristine forested area on the island’s north coast, was turned down for seven specific reasons. #Youth4PuertoBueno created a video which delves into those reasons here:

It's another day and we're still making noise ?️?️ #Youth4PuertoBueno [9]

Want to get involved? There are a couple of ways you can join the campaign. ?? (Thread) pic.twitter.com/sqGVvXW5rF [10]

When the mining company appealed [12], Leslie Campbell, the government minister temporarily in charge of the environment portfolio, upheld it — a decision that Prime Minister Holness approved [13] in July. Upon receiving notice from NEPA that its denial of the permit had been overturned and that quarrying would go ahead, local residents raised the alarm.

Two petitions to protect the area are in active circulation: the first [14] on the Office of the Prime Minister's website, which requires 15,000 signatures by December 27, and is open to Jamaican citizens only, and another [15] started by local resident and botanist Wendy Lee, which has already reached 10,000 signatures. 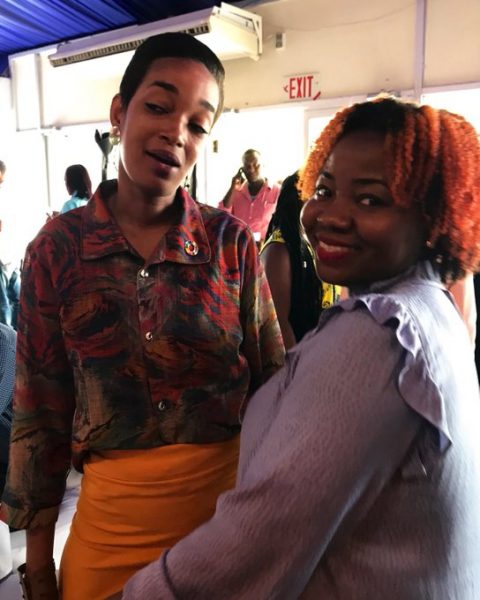 Despite the strong pushback from several influential individuals and civil society organisations — including Dr. Damien King, an economics professor and director of the local think tank CaPRI [16], and the anti-corruption lobby group National Integrity Action [17] — there is no indication that the prime minister will change his mind. In fact, he has vigorously defended [18] his stance, citing [19] economic and “pragmatic” reasons and stressing that there were stringent conditions [6] attached to the permit.

This has not appeased the #Youth4PuertoBueno, who have no intention of giving up. The core group of four post-graduate students, all active campaigners for climate change action — Ayesha Constable, Dainalyn Swaby, Eleanor Terrelonge and Jhanell Tomlinson — have drawn in a wider group of young people, mostly students, to back the cause. Young People for Action on Climate Change (YPACC), co-founded by Tomlinson, tweeted:

Our collective future is at stake, not with this one ‘override’ but with a precedence that threatens to dismiss the value of scientific evidence and stakeholder input in development planning & the credibility of regulatory agencies. #youth4PuertoBueno [20] @djmillerJA [21] @dmccaulay [22] https://t.co/hWIVC9LVT8 [23]

Ayesha Constable shared the tweet while acknowledging the inspiration of Diana McCaulay [25], founder of the Jamaica Environment Trust [26]:

There's nothing like seeing an idea come to life in a more forceful & impactful way than you envisioned it. #youth4PuertoBueno [20] is a movement & a reminder that going together takes you further! @LynnSwaby [27] @Jaybritz [28] @LynnSwaby [27] I salute you. @dmccaulay [22] we stand on your shoulders?? 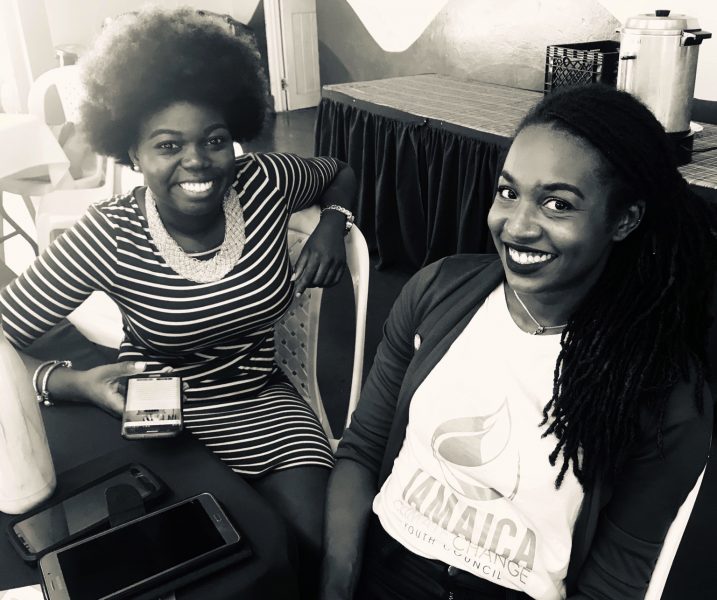 Meanwhile, communications student, podcaster and environmental advocate Dainalyn Swaby composed a dub poem that she performed in Patois [30]. Her video was widely shared by young supporters of the cause:

Together we stand, again, to protect our environment from those who only pretend to understand, but only mean to serve themselves!#ProtectPuertoBueno [31] https://t.co/Lbvtgrb2Q6 [32]

#Youth4PuertoBueno was among the signatories to an Open Letter to the Prime Minister [34], led by the Jamaica Climate Change Youth Council (JCCYC) [35]. Eight other youth lobby groups co-signed:

As young people, we are disappointed, not just with this decision, but what seems to be the Prime Minister’s negative attitude toward environmental stewardship. Even though, in his Heroes’ Day address, he called on us to be ‘environmental heroes,’ we are being consistently and publicly disrespected and ignored. The Prime Minister seems to have taken over the role of the technical experts in making decisions. This is far from the democratic model on which our government is expected to operate.

To restore confidence in your leadership of the environment agenda and to restore the confidence of the youth of Jamaica that was promised a future, we ask you to consider the following:

Move NEPA to its rightful home as an agency within the Ministry of Housing, Urban Development, Environment & Climate Change (HURECC) as a display of commitment to prioritizing the environment in development.
Commit to review of the legislative framework governing the environment starting with the NRCA Act and EIA process.
Commit to no further mining within the Cockpit Country and revisit the CCPA boundaries previously declared.
Commit to complete transparency of any decision-making process involving our environmental assets.

We are the generation that will have to live with climate change and the negative impacts of today’s decisions. It is therefore important that our seats at the table be seats of value and our involvement in the decision-making processes of our country are given the deference it deserves.

Young Jamaicans have also been very astute about harnessing the power of social media to raise awareness. Founder and Director of the JCCYC, Eleanor Terrelonge, tweeted about a new Instagram Live series, which started on November 21: 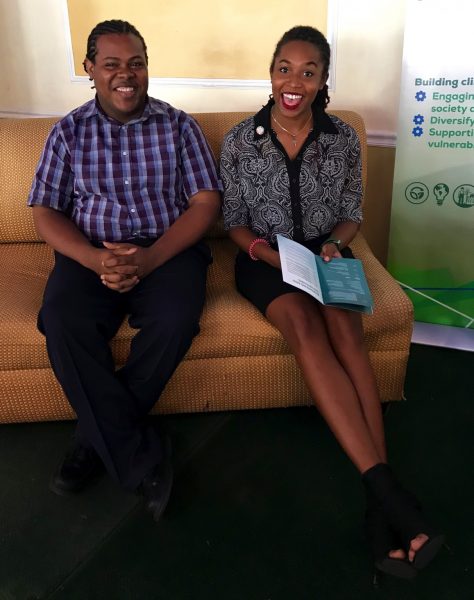 Adrian Watson (left) of the Caribbean Youth Environment Network and Eleanor Terrelonge, who spoke at a Green Climate Fund event in Kingston, November 2019. Photo by Emma Lewis, used with permission.

The interactive series focuses on conversations between young scientists and highlights different aspects of the Puerto Bueno issue, to educate Jamaican youth on its significance.

The first chat  [39]focused on the importance of biodiversity in the area. Gavin Campbell, a doctoral ecology student at the University of the West Indies who took part in the episode, observed, “There is no environmental justice without social justice.” Referring to the people impacted by the planned mine whose concerns must be respected, he lamented, “We don’t focus on ecosystems — we focus on what can give us some money right now.”

The series underscores the importance of locally educated experts.

The #Youth4PuertoBueno movement is an important step forward for Jamaican youth, many of whom have already been speaking at meetings and conferences and amplifying their voices online.

As Dainalyn Swaby put it on IG Live, “This is the starting point of a new wave of environmental consciousness in Jamaica.”

Whatever the outcome of the Puerto Bueno controversy, young Jamaican advocates have added a new, energetic dimension to the debate. Not only are they optimistic, but they seem to be in it for the long haul.