Are some citizens being targeted more than others when it comes to Trinidad & Tobago's COVID-19 legislation? 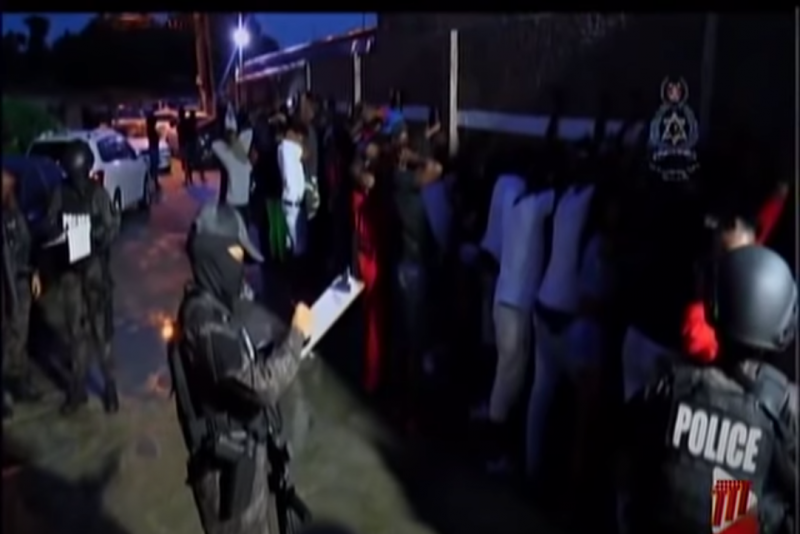 Footage of the Trinidad and Tobago Police Service (TTPS) raid of the “Zesser” party in central Trinidad on November 22, 2020. Screenshot taken from a TTT news report about the event uploaded to TTT Live Online's YouTube channel.

After officers of the Trinidad and Tobago Police Service (TTPS) raided a paid party that was in full swing in the early hours of November 22, with no mask-wearing or physical distancing in effect, netizens are once again suggesting there is a double standard when it comes to the enforcement of COVID-19 protocols.

The “Zesser party,” as it is being called, came to an abrupt halt with the arrest of at least 250 people who attended the event in central Trinidad. Local reports suggest that women, children and local dancehall performers were among those detained, and that suspected gang members were also in attendance.

In a brief statement on its official Facebook page, the police service noted that the partygoers were in breach of a section of the COVID-19 public health regulations which relates to public parties and fetes.

On his own Facebook page, Commissioner of Police Gary Griffith said that the police “will be placing heavy emphasis on targeting and shutting down any parties of this nature on both private or public property.”

However, a “grand” wedding in an upscale residential neighbourhood on November 21, which was allegedly attended by guests that included “top government officials” only some of whom were wearing masks, was not shut down, leaving many social media users to wonder about the efficacy of the country's COVID-19 rules and how they are being enforced.

Trinidad and Tobago's public health regulations currently mandate gatherings of no more than 10, though there has been some confusion over whether or not the legislation can be applied to private property.

The next objective is to prevent these Zesser parties, whereby the organizers are trying to beat the system, using the get out of jail free card by stating it is private property.

His statement, which specifically targeted the Zesser culture, left many netizens with the impression that the legislation was being enforced based on class and race, instead of being evenly applied across the board:

Persons inviting their family and personal friends in small numbers to their home on private property is something totally different, as there is no law being broken, but they do have a responsibility to act in consideration of the COVID-19 guidelines and protocols. This is totally different to Zesser parties, where organizers are advertising prior to the event, and patrons are paying a cover charge to enter the premises of persons they do not even know, with a cash bar at the event. This takes away the get out of jail free card of it being private property as such the Police would treat it as a violation of the legislation.

The inconsistency has left a bad taste in people's mouths, and they are sharing concerns  — via WhatsApp and other social media platforms — that such incongruity will add to the public's confusion, resulting in further flouting of the rules.

With Christmas on the horizon, typically a time of year that sees an increase in parties and large gatherings (Prime Minister Keith Rowley has said there will be no state-sponsored Christmas parties in the public sector this year, and has asked private companies and citizens to do the same) and the country's COVID-19 cases on the rise, the gap between the legislation and how it is being enforced is an issue many feel warrants immediate attention.