Two white snakes, first of their species in the world, found in Nepal

Kraits are some of the world's most venomous snakes 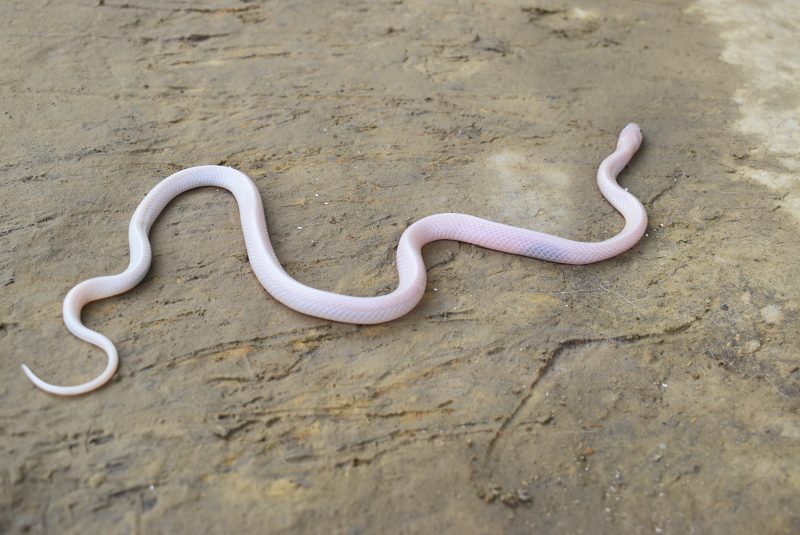 One of the leucistic kraits discovered in Nepal. Photo by Dev Narayan Mandal and Ganesh Sah. Used with permission.

According to a research paper published in October 2020, two white-coloured kraits (of the genus Bungarus) discovered during rescue calls in Nepal's southeastern region of Province No. 2, are the first such recorded cases in their species. Kraits are known to be some of the most venomous snakes found in the Indian subcontinent.

On April 25, 2020, a pink-skinned, black-eyed wall’s krait (Bungarus walli) was found in the Dhanushadham municipality in the province's Dhanusha District.

“The snake was kept inside a clay pot,” explained Ganesh Sah, a reptile rescuer and wildlife photographer who spoke with Global Voices by phone. He added that a villager initially assumed that he was not a rescuer but someone who wanted to profit from discovering the snake. “I had to convince the community members before they allowed me to release the snake into [its] natural habitat.”

A little over a month later, on June 3, Sah rescued another leucistic snake that had been discovered in Dhanushadham's Kishanpur region. This Bungarus niger species, commonly called the greater black krait, looked similar to the one found in Matiarba in April:

An example why you should never use only colors for identifying #venomous snakes.
Amazing article by Kamal Devkota and team on first report of #leucism in two species of Krait in Nepal.
Name : Black #Krait ( B. niger) and Wall's Krait (B. walli)
Highly venomous (Neurotoxicity) pic.twitter.com/PHMFLhRDRI

Leucism and albinism in snakes

Leucism, a genetic condition that is often confused with albinism, is caused by either a complete or partial loss of pigmentation, resulting in white-coloured skin. Eye colour, however, is not affected.

Albinism, on the other hand, is caused by an absence of melanin, which is what gives skin and eyes their colour. The eyes of albino snakes appear pink because the blood vessels shine through their eyeballs.

In a telephone interview, Kamal Devkota, the lead author of the research paper, noted that either leucism or albinism in venomous snakes makes them more vulnerable: their appearance makes them easy to spot, so they often fall prey to predators, and their inability to camouflage presents them with difficulties in finding food. Moreover, they are unable to thermoregulate properly, which affects their movement and digestion.

The photographic guide Venomous Snakes of Nepal states that out of the 89 snake species recorded in the country, 17 — including six different species of kraits — are considered highly venomous and dangerous.

The Wall’s krait (Bungarus walli) variety has a head, body and tail that is typically shiny black, brownish-black or grey, with numerous narrow white or yellowish bands. It has been recorded in Nepal's southeast lowlands, the Gangetic floodplains of northern India, and Bangladesh's delta region.

The greater black krait (Bungarus niger) has a shiny black, brownish-black or dark chocolate head, body and tail with no bands or lines. It has been recorded in the lowlands and lower mountains of Nepal, Bhutan, India, Bangladesh and Myanmar.

Kraits are usually active at night and their bites can prove fatal within as little as 24 hours. The World Health Organization estimates that 20,000 people are bitten by snakes each year in Nepal, and more than 1,000 of them die. Many studies suggest, however, that the figures may be higher.

Although less than 20 per cent of the snake species found in Nepal are highly venomous, people tend to be afraid of all snakes. Quite often, rat snakes — which are non-venomous — are mistaken for cobras, as are wolf snakes for kraits.

Such cases of mistaken identity usually result in the killing of these creatures, but awareness programmes and the establishment of snake information centres have helped change people’s perceptions as organisations and individuals alike have been rescuing snakes and educating people about them.