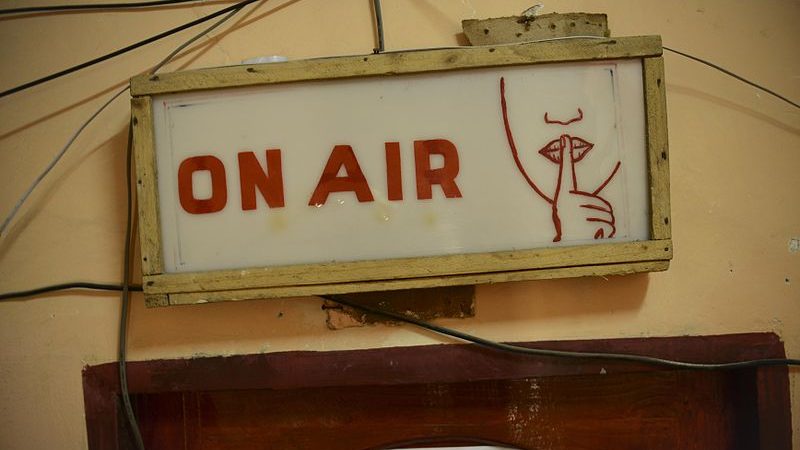 With the recent passage of a controversial media bill into law by Somali President Mohamed Abdullahi Farmjo, Somalia’s media workers worry about what may lie ahead for journalists who are already struggling in a hostile media environment.

The bill, signed on August 26, contains 41 articles on the media and how they should conduct their work. The law will restrict media workers and will give the state unrestrained power over the media.

Why are civil societies and the media crying foul over the bill?

According to Abdalla Mumin, secretary-general of the Somali Journalist Syndicate, a press rights group, the recently signed media law will bring the press under the direct government control as if all media is state-run media. This violates the constitution and paves the way for a more restrictive environment in which journalism becomes a crime.

He wrote an impassioned tweet on the matter in August after the bill passed:

When you tear out a man's tongue, you are not proving him a liar, you're only telling the world that you fear what he might say.

The media bill decries that the government will issue licenses to journalists and can withdraw at any time, for any reason, if the journalist is deemed too critical. The Ministry of Information accredits journalists rather than a press association or independent, nongovernmental media organizations.

The law clearly allows the state to control and direct media workers whether they are working for the state-run media or otherwise. This holds media practitioners as hostages to the state and compromises their impartiality. There is no place other than authoritarian states where media workers seek licenses and accreditation from the government.

In August, top press chief Abdinur Mohamed Ahmed said 16 articles have been omitted from the bill and others amended in an interview with BBC Somali. But media associations still decry the bill and deem it oppressive.

Former President Hassan Sheikh initially signed the controversial bill into law in 2016, and ever since, media associations and civil society groups have led campaigns to reverse the law due to its draconian nature. Progress was made when the current president came to power and ordered a review of the law, but the review alone did not meet the demands of media practitioners and civil rights defenders.

On August 31, former Information Minister Mohamed Abdi Hayir remarked that Somalia is not the only country where the government issues media licenses, during a talk show hosted by Universal TV (a Somali satellite TV station). In response, the Somali Journalist Syndicate Secretary Mumin lashed out at the information minister, accusing him of copying from dictatorial states where freedom of the press is nonexistent.

Somalia’s media community are also protesting the bill’s call for the formation of a media council, wherein the government will have unparalleled hegemonic power over all media associations.

The nine-member council, consisting of three members from independent media, three members from civil society, and three government members, will have the final say on holding media workers accountable. They will also look into the complaints against the media and make decisions about license withdrawals from media houses. But media organizations consider this council a “censorship” board and are worried that ahead of Somalia’s upcoming elections, this could prove problematic for dissenting voices.

According to the Committee to Protect Journalists’ impunity index, Somalia is among the most dangerous places for a journalist to work. CPJ says 26 murders of journalists in Somalia remain unsolved. Although the number of murder cases has declined, harassment from authorities persists in the form of illegal detention, arbitrary arrest and denied access to information.

Some Somali media workers have paid the ultimate price for their chosen profession. Since 2017-2020, 11 journalists were killed and their perpetrators have not yet been held accountable. This culture of impunity creates an environment where journalists fear for their safety and therefore hesitate to report.

Eleven journalists were killed in the country in the past four years: 3 in 2017; 4 in 2018; 2 in 2019 and 2 in 2020, making the country to remain as one of the most dangerous places for journalists across the globe. @sjs_Somalia @forfreemedia pic.twitter.com/31MvfNI7yC

Journalists also face the risk of arbitrary detention, either due to critical Facebook posts or conducting interviews that authorities don’t approve of.

The latest victim of a government crackdown on media is Abdullahi Kulmiye Addow, a broadcast journalist who interviewed an Islamist-leaning businessman who is critical of the Somali government and African Union peacekeepers. After Addow’s radio station released a trailer for the interview, agents from the Somali national intelligence and security agency raided his home on the night of October 18, and kept him at their headquarters for five days. He was later released when his radio station agreed not to air the full interview in exchange for Addow’s release.

Editor Abdul Aziz Gurbiye, of Goobjoog media, a privately owned media house, was arrested on April 14, over a Facebook post in which he alleged that Somali President Mohamed Abdullahi Farmajo appropriated a COVID-19 ventilator machine for himself that was meant for public use. Five days later, he was released on bail. After two months of back and forth, a court battle ensued that ended in a guilty verdict, and Gurbiye was charged with spreading false information and offending the president’s honor. He was sentenced to six months but was allowed to pay a $200 fine instead of imprisonment.

Press associations and media owners have come together to warn against the implementation of the media law. They allege that Osman Dubbe, the new information minister, is seeking support from the international community and that he sent a solicitation letter to potential donors on November 7, to support the law’s implementation.

On November 18, Somali media associations called upon Dubbe to come to the negotiating table for a thorough review of the bill.

During today's journalists consultative conference in #Mogadishu, we jointly raised our concerns on attempts by the new Minister of Info to hastily implement
the draconian #Somali Media Law, safety of the working journalists & denounced the rise of threats against the press. pic.twitter.com/sF6KG4NpHm

Since the 1991 fall of the military regime, the media landscape has shifted from a single state-run media to multiple outlets. But with remnants of the old draconian law still existing and applied, any gains made may be in vain.

Media associations and civil society groups in Somalia have loudly protested against the imposition of this law that will hamper free press and shrink an already narrowing political space. Without a free press, justice disappears and authoritarianism takes over.