'The sensibility and force of her literature have endured'

The late Dominica-born writer Jean Rhys, best known for her novel “Wide Sargasso Sea” — a creatively daring, strongly feminist, and brazenly anti-colonial counter to Charlotte Brontë's “Jane Eyre” — is considered an integral part of the literary canon, but what makes her so great?

In celebration of the Royal Society of Literature’s 200th birthday, and the 10th anniversary of the premier Caribbean literary festival, the NGC Bocas Lit Fest, a panel that included American writer Lauren Elkin, British novelist Linda Grant, and Trinidadian poet Shivanee Ramlochan attempted to answer that question via an online event that was streamed on November 19.

“Wide Sargasso Sea” is told from the point of view of Antoinette Cosway, Rhys’ take on Bertha Mason, the mad wife of Mr. Rochester in Brontë's classic. Although now hailed as a masterpiece (TIME magazine named it among the 100 best English-language novels since 1923 and Bocas Lit Fest deemed it one of the “100 Caribbean Books That Made Us”), it was a controversial piece of work when it was published in 1966.

Yet, though many of the panellists called it a “perfect” novel, “Wide Sargasso Sea” was not the sum of Rhys’ work. Her career spanned decades, from her early novels set in Paris to her unfinished autobiography, which was published in 1979, the year she died.

Jean Rhys is a household name across the Caribbean due in large part to the fact that “Wide Sargasso Sea” is a staple of the education curriculum — but this was not the only reason Shivanee Ramlochan suggested that Rhys’ importance could not be understated.

“The sensibility and force of her literature have endured in ways that perhaps some people may not have expected,” she explained, noting that Rhys’ themes remain relevant to “the issues of power, subordination, obedience and who writes what narratives” — issues Ramlochan says the Caribbean space will likely always grapple with. 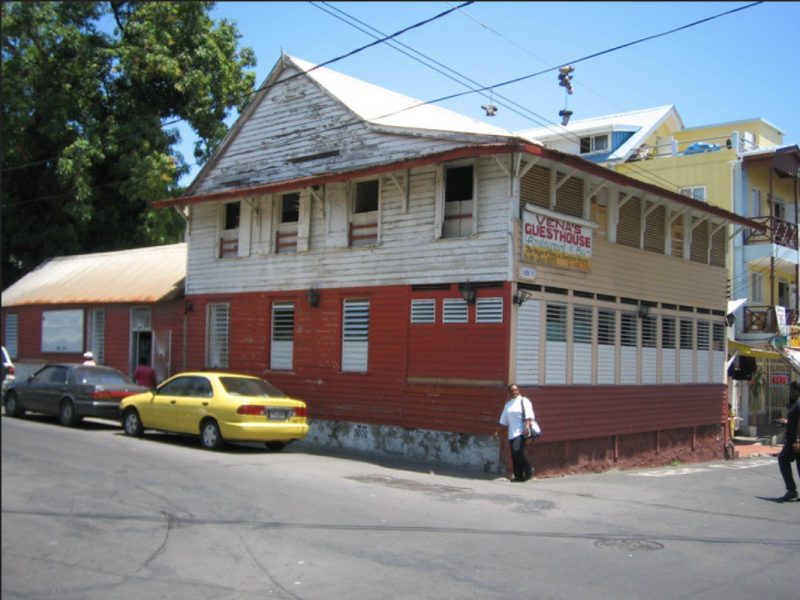 Novelist Jean Rhys’ childhood home in Roseau, Dominica, taken in May 2006, 14 years before it was demolished. Photo by Janine Mendes-Franco, used with permission.

In May 2020, Rhys’ childhood home in Dominica's capital, Roseau, was demolished to accommodate commercial construction, an act that Ramlochan found “instructive”:

[…] on the one hand for someone like me it’s an unbearable tragedy, but in looking at the responses of Dominicans [some] question the legitimacy of Rhys to that climate […] the idea of why a white Dominican woman who spent scant time in Dominica should be venerated in a certain way. So the response to Rhys is not just one thing [it's] an interweaving of complex parts of what makes Caribbean identity or a Caribbean writer.

Although all members of the panel were fans of the writer, they each had different experiences when reading Rhys for the first time.

Lauren Elkin, now 42, first discovered Rhys when she was in her 20s and living in Paris (many of Rhys’ early novels were set in the French city). She recalls being “entranced by this stark, sinewy, sensual, and incredibly lush and complex view of the world [and] her interrogation of what it is to be a woman […] who doesn’t quite fit in.”

Linda Grant, who called Rhys “the great stylist”, began to consume her writing in the 1970s. Rhys, she says, managed “to have stripped bare the essence of what it was to be female in a world which was anti-feminist […] For the first time, we saw what happens to women in a men’s world.” Grant was also drawn in by Rhys’ “extraordinary prose”:

I don’t know what she’s doing, I cannot see how she does it. There are no rhetorical flourishes, […] The sentences are short, they are quite unadorned, there’s very little in the way of adjectives or adverbs and then suddenly you turn a page and everything has led you on to being punched in the solar plexus by one sentence. It’s perfect. She’s like Bach. She writes in a way that is pellucid; you can see through it – and it seems to be coming from a very precise place in her brain where she is totally in control of what she’s saying. I would place her among the highest ranks – Virginia Woolf, James Joyce.

Ramlochan, meanwhile, said that her relationship with Rhys has been “the defining one” in her career as a poet and writer.

A writer that ‘asks us to look beyond’

While some misunderstand Rhys, reducing her to “this doomed passive figure”, Elkin described the author's work as:

[…] a complex feminist project, asking us to look beyond the sleeping with men to get by. [Rhys] is a major social writer condemning her social system, not just lamenting her lot. She's a major ethical voice, asking us to reassess.

Others criticise the autobiographical elements in Rhys’ work, which Elkin believes denies the author her craft.

Noting that Rhys once said, “I begin with a fact and then something happens to it”, Elkin dubbed her “the originator of auto-fiction”, adding, “It's not reductive to say that she’s exploring the chemistry of what happens when you put the two together on the page.”

From Nobel Laureate Derek Walcott to more contemporary voices like Tiphanie Yanique, Caribbean writers have been inspired by Rhys, perhaps partly because of her anti-colonial stance.

Being from the Caribbean, Ramlochan said, “It’s easy for me to look at a character like Mr. Rochester and understand how he feels hard done by a place he only ever expected to colonise and [use] to his own ends. Colonisers don’t expect a hard time.” Describing Rhys’ response to this as “appropriate”, she explained:

It was a bold position to take at the time “Wild Sargasso Sea” was written, and the novel was likely one of the first Caribbean books published from the perspective of a character in an existing work.

From “Good Morning Midnight”, a culmination of Rhys’ 1930s novels, to her magnum opus, discovering — or re-discovering — Rhys is a journey well worth taking.

As Ramlochan put it, “These times feel like they are demanding a certain kind of revelation and I truly think I’m going to find it in returning to Rhys.”