"What Animal Crossing represented was not just entertainment [...]" 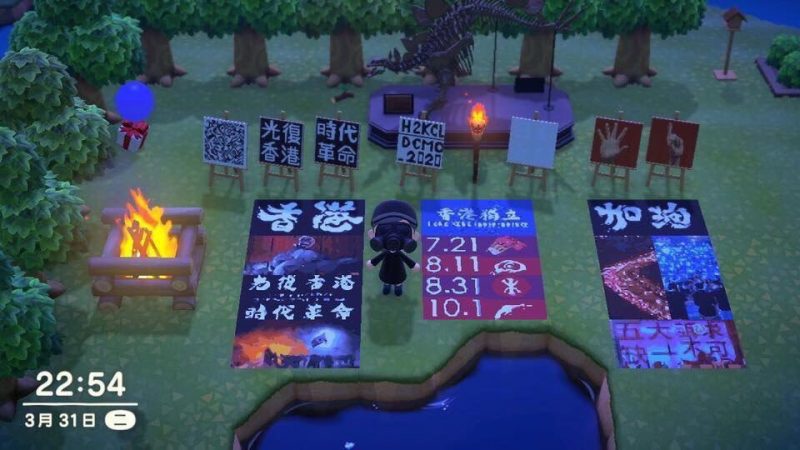 The following post was written by Candice Chau and originally published on Hong Kong Free Press on November 21, 2020. This edited version is republished on Global Voices under a content partnership agreement.

The game has been a hit since its launch in March, selling over 20 million copies by September. It allows users to craft tools, decorations and other creature comforts from scratch on their own deserted islands.

Nintendo told businesses and organisations to “refrain from bringing politics into the game,” and said those who breached the guidelines could be banned.

However, some users have utilised its features — which include communicating with one another via direct messaging, sending postcards, updating their passport status and creating bulletin-board posts — to send political messages.

In Hong Kong, some players have been creating pro-democracy and anti-government content, including flags with protest slogans such as “Liberate Hong Kong, revolution of our times,” funeral photographs of Chinese leader Xi Jinping, and “villain-hitting” sessions aimed at Hong Kong’s leader Carrie Lam.

The game has since been pulled from Chinese grey market online shopping platforms.

United States President-elect Joe Biden is among those who hoped to capitalise on the game’s popularity. Prior to the election, Biden’s campaign launched its own virtual island, allowing players to “volunteer” at the island’s campaign headquarters and visit polling stations. Under the new guidelines, the island is likely to be banned:

Activist Joshua Wong told Hong Kong Free Press that he had taken part in a number of virtual protests in the game this year:

What Animal Crossing represented was not just entertainment during lockdown, but also a reflection of happenings in real life. It provides an alternative when institutional channels of expression are restricted…It is a shame that Nintendo overlooked the significance of this game.