They support democratic reforms, constitutional amendments, and the ouster of the prime minister 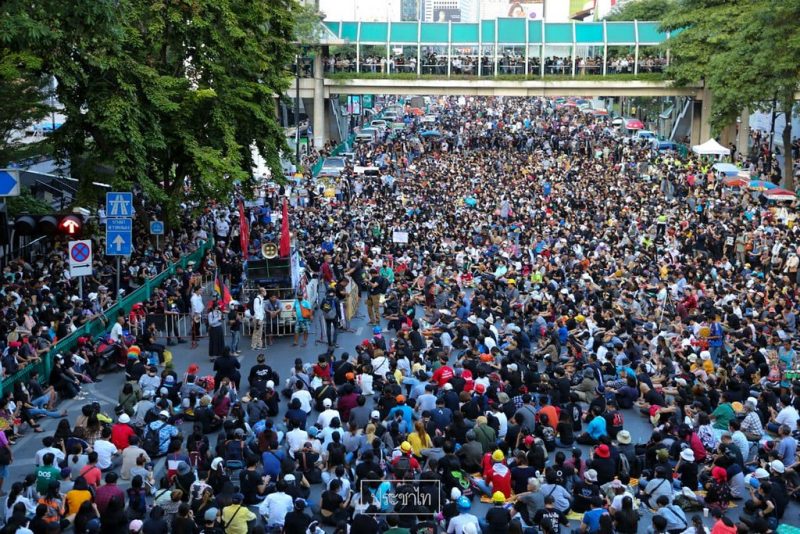 Thousands gathered in Ratchaprasong, Bangkok to condemn police violence in the dispersal of pro-democracy protests. Photo from Prachatai. Used with permission.

Thousands gathered at Ratchaprasong in central Bangkok on November 18 to protest the authorities’ use of force against protestors the day before. They were also there to decry a parliamentary vote to reject a constitutional amendment draft proposed by civil society group iLaw and backed by over 90,000 voters.

Only 2 out of 7 draft amendments passed the first reading: the one by the government coalition and one of those by the opposition, both to amend Section 256 allowing the establishment of a Constitution Drafting Assembly.

[One of the demands of the protest movement is the rewriting of the military-drafted constitution which guarantees military control of the bureaucracy. The parliament accepted on first reading the proposal to establish a Constitution Drafting Assembly but rejected other amendments such as removing the senate power to vote for the prime minister and delegitimizing orders of the military-backed government after the 2014 coup.]

Prachatai spoke to some of the protesters at Ratchaprasong, most of whom said they would like to see the country change for the better. 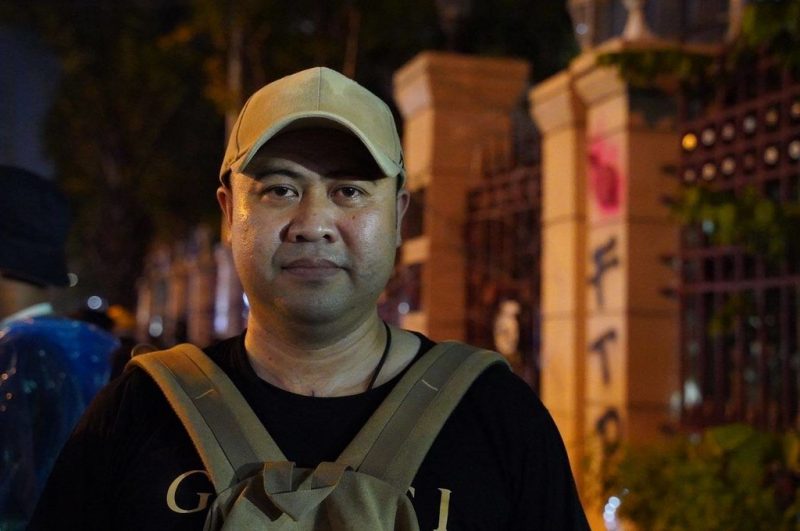 Nugul Ratiyapinun attended the protest to show support for the proposal to amend the Constitution in order to implement democratic reforms in governance. Photo from Prachatai. Used with permission.

Nugul Ratiyapinun was at the November 17 protest near the parliament compound. Despite being tear-gassed, he came to the protest at Ratchaprasong the next day.

I want to see the people accept change in the country. Most of the people must live with the reality that the world has changed now in terms of economics and communications. Thailand should adapt too. The constitution should truly grant the rights and freedoms of the people, [as a full-fledged democracy, not a half-fledged one as it currently is.

He explained that the appointment of 250 senators by a junta-appointed commission, plus the regulation that a third of them must approve the first reading of the amendments showed that the minority has more power than the majority, which made him feel that Thai democracy is not real. 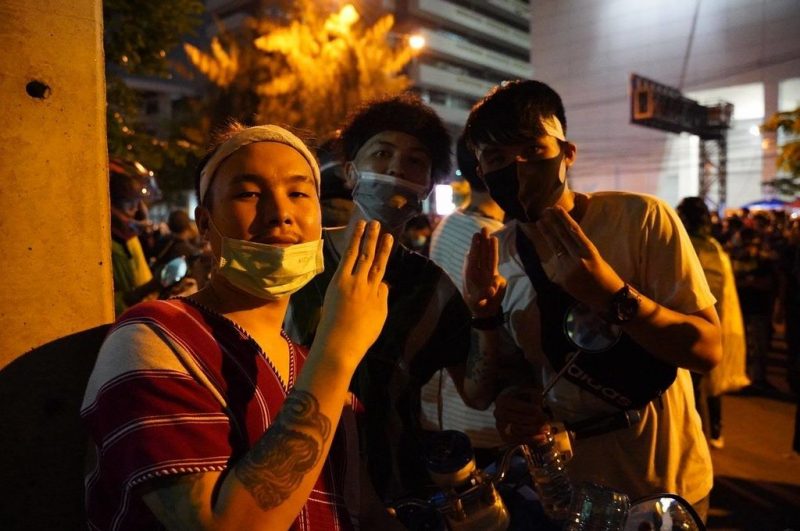 Young protesters who call themselves “highland youngsters for democracy group”. Photo from Prachatai. Used with permission.

A group of three men who called themselves “highland youngsters for democracy” was also at the protest. They said that they came from a Pga K’nyau ethnic community (also known as Karen) in Tak Province, and said they would like to see more change as the conditions in their community are severely underdeveloped.

We came to protest. We would like a new prime minister, because Prayut didn’t come into office legitimately. He recruited the 250 senators himself, he chose them himself, and then the senators elected him as prime minister.

Another member of the group said that he is studying at Ramkhamhaeng University and was following the parliamentary discussion on the draft constitutional amendments. He said he was angry that parliament did not approve the draft that was backed by the people, and because of the use of violence against protesters on November 18, so he decided to join the Ratchaprasong protest. 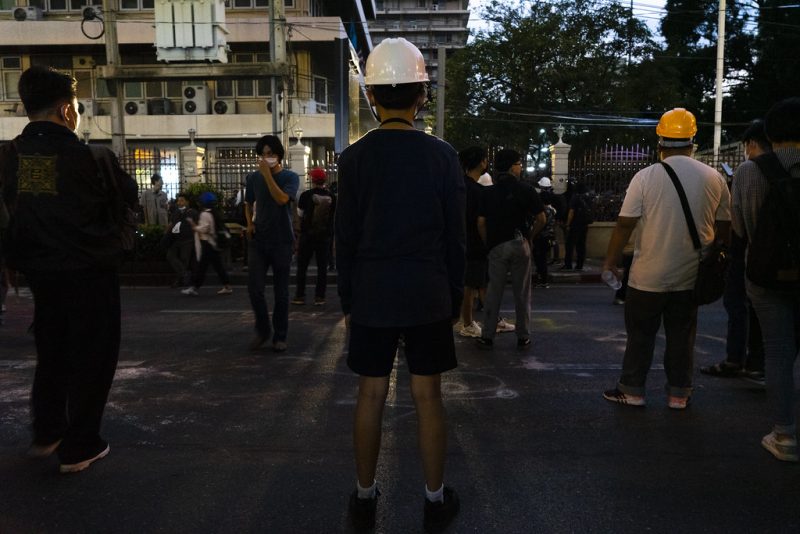 Protesters at the rally. Photo from Prachatai. Used with permission.

In front of the police headquarters, P., 15, was standing with the group of protesters shouting at police officers. She said that she was angry with the authorities for their use of force against the protesters on November 17, even though she was not there.

I was very angry that they did this. We are the owners of the country. This country is not their country as they say, but what they are doing is a great insult to us. We are out here to demand our rights in proposing constitutional amendments.

But look at what they did to us. Water cannon. Loudspeaker trucks. Batons. Shields. Personally, I think it’s not fair. If you want to be democratic, but you have no justice, then you shouldn’t call yourself democratic, but we’re a dictatorship right now.

Right now I’m in Mathayom 4 (Year 10). In 6 years, I will finish 4th year (of university). I have to find a job. If he stays for another 2-3 years, that has to have an effect until when I’m working. I will not accept a life without getting what I should get. The tax I pay is not what I deserve. I feel that I have to come out to demand my rights. My friends, my younger siblings, or my children in the future should have a better life than this.

As she is not yet 18, P. is too young to sign her support for the constitutional amendments proposed by iLaw, but she said that the current constitution is not fair for the people and written in favour of those in power.

P. asked us not to show her face because she cannot tell her family members, except for her father, that she is joining the protest.

My father said that, in the end, the person who has to make a life is me, not him, so it is my right to come out or not to come out to call for my rights.

Yesterday, she saw violence, so I tried to explain to her that we weren’t violent. The other side was violent. She said that in any event it’s violent and that if I go, it’s still dangerous. She’s okay with me supporting this side, but she’s just not okay with going to protests.

Meanwhile, children’s rights and welfare advocates were seen stationed in front of the Central World mall, where they formed a group called “children in the mob” to spread information about children’s rights, statistics about children and young people affected by protest crackdowns, and how to take care of teens in protests.

Ruangthap Kaeokaemchan, a member of the group, said they held this activity to inform the protesters about safe spots for young people for first aid in the protest as well as the way to take care of them if a crackdown took place.

She said the right to political expression is the right of young people. They should be protected from the time they arrive at the protest until the time that they return home. Unlike in other countries, protests in Thailand have never been safe enough for children to join. The authorities should not respond to a peaceful movement by violence.

We are not saying that we invite the children to protests. But we are saying what you should have in mind when you come to a protest. And safety is an important thing to be aware of. Parents or the leading figures must also be aware. But the venues of protests in Thailand have never been made safe at all.