Judging by Weibo, the tech billionaire went from hero to villain in the space of a week 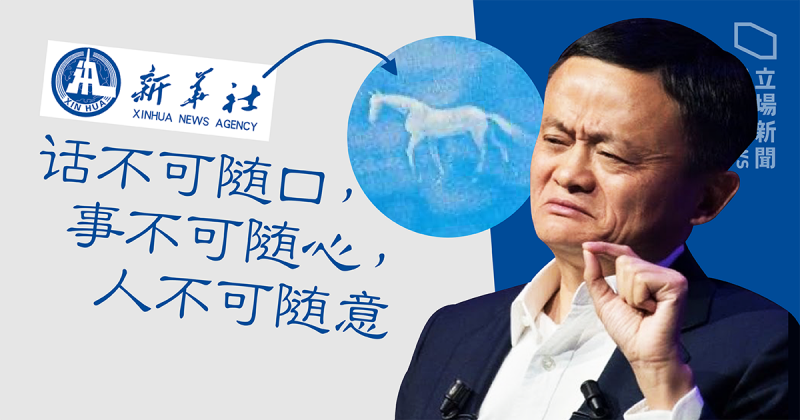 Xinhua's cryptic line: “Don’t talk casually, don’t do things casually, and people should not be casual”. Image from the Stand News. Used with permission.

Earlier this month, the financial world was shocked by the sudden suspension of Ant Group's initial public offering (IPO), set to debut on the Hong Kong and Shanghai stock market on November 2. With 34 billion USD in proceeds, it would have been the world's biggest stock debut in history.

Ant Group, formerly known as Alipay, is the world's highest-valued fintech company. It has over 730 million users, mainly located in mainland China, who rely on its multiple financial services to shop, take small loans, transfer money to each other, and invest their savings. Alibaba, who Jack Ma cofounded, owns a one-third stake in Ant Group, rendering him the latter's controlling shareholder.

One day before Ant Group announced it was putting the brakes on the IPO, Ma and other senior executives were summoned to a closed-door meeting with China's banking regulator. Ant Group released a brief statement saying that the meeting was about “the health and stability of the financial sector.” Naturally, widespread speculation that the Chinese government had intervened to thwart the company's move followed suit.

The news confirmed a belief shared by many Chinese netizens: That President Xi distrusts Ma. After all, he wouldn't be the first to get into Xi's crosshairs, whose presidency has been distinguished by a relentless crackdown on billionaires who don't toe the party line.

In 2017, Chinese-Canadian businessman Xiao Jinhua was abducted in Hong Kong and taken to mainland China, where he remains in jail. Around the same time, businessman Guo Wengui went into exile to the U.S. and transformed himself into an anti-China activist. Other billionaires recently arrested and charged with corruption or economic crimes are Ye Jianming, former Chairman of CEFC China Energy Company Limited, and property tycoon Ren Zhiqiang.

Ma has long proclaimed to be his mission to transform China’s stiff and outdated banking system. Ant's financial services, in his view, help channel capital to small businesses and ordinary citizens, while weathering the risk of bad debt with artificial intelligence — or, to put it simply, a private credit score system.

As in many other countries, Ant group and other fintech businesses have so far operated under looser regulation than traditional banks in China. Borrowers do not need to present guarantees for their micro-loans but agree on higher interest rates. Such conditions present a huge risk of default, which is why Chinese regulators plan to introduce new rules of supervision and management to the sector. It is anticipated, for example, that the new regulations would restrict Chinese banks’ funding to fintech companies.

New regulations aside, many Chinese netizens are wondering how political was the decision to halt Ant Group's IPO, and have dig through the internet to find clues.

In addition, it seems that Ma, a once-celebrated innovation hero in China, has taken a reputational hit — at least judging by recent comments on Weibo.

Even before the WSJ reported on Xi's involvement, Chinese netizens have searched for clues on China's state-owned media as to why the IPO had been suspended.

Many pointed to a cryptic article published on Xinhua on the night of the closed-door meeting. The headline of the article says “Don’t talk casually, don’t do things casually, and people should not be casual” (話不可以隨口，事不可隨心，人不可隨意). The article also shows a painting depicting a horse striding over clouds; In Chinese, horse is 馬 (“ma”) and cloud is 雲 (“yun”) — that's Jack Ma’s Chinese name.

Above the painting, the article says: “Everything has its costs, if you don’t have the capital, don’t do whatever you want.” (任何事情背後都有代價，如果沒有資本，就不要隨心所欲。)

Brian Cheng posted a screenshot of the painting on Twitter and asked about Jack Ma’s whereabouts:

Where is Jack Ma Nowadays?
In Jail or in Sky. #Jack Ma (馬雲 =Horse Cloud)
# Photo by XinHua Daily pic.twitter.com/DUfe8lue3Q

Meanwhile, netizens interpreted the “don't talk casually” of the article's headline as a reference to a talk Ma delivered at a conference in Shanghai on October 24 in which he outlined his bank-transformation mission.

They have circulated on social media a chart, produced by Chinese finance news outlet Caixin, showing the distribution of Ant Group’s shares.

@LifetimeUSCN posted the chart on Twitter, highlighting the fact that the family of former Chinese president Jiang Zemin has a stake in the Group:

In recent years, Caixin often brings down people with its investigations. Its most recent investigation is on Ant Group. From the chart, we see that among the top ranking CCP members, only Boyu Capital, controlled by Jiang Zeming’s family, has direct holding in the group. It is pretty clear that the distribution of interest has lost the balance.

After the WSJ story, more “evidence” of Xi Jinping's distrust of Jack Ma emerged on Weibo.

One much-circulated item was a video compilation (via Twitter) of Jack Ma’s public speeches between 2015 and 2018. When asked whether his fund for young entrepreneurs would be open to young people who had participated in the 2014 pro-democracy protests in Hong Kong, Ma replied “why not?”

In 2018, when delivering a speech about Hong Kong’s role in China's Belt and Road Initiatives, he praised Hong Kong’s “One Country, Two Systems,” saying that if the same political system was introduced to Zhejiang, where Ant Group's headquarters is located, the city would prosper.

Recent comments on Weibo slammed Jack Ma's public speeches for not sticking to the party line. For example:

Once the Donglin Movement (back in late Ming Dynasty) refused to pay tax to the nation, now someone wanted to see Zhejiang taking up Hong Kong’s One Country Two Systems model and to evade tax like Hong Kong. What’s the intention behind such a suggestion?

Jack Ma, don’t you think that your position as co-chair on the UN High Level Panel on Digital Cooperation and UNCTAD Special Advisor for Youth Entrepreneurship could empower you to act independently. Remember the former head of the Interpol was investigated. [Former Interpol chief Meng Hongwei was charged with bribery and sentenced to 13 years and 6 months in jail by a Chinese court in January 2020 — ed.]

Conspiracy theories also circulated on Chinese social media. The following one has been cross-posted by many Weibo and WeChat users:

He has used all means to get the green light on and became the world’s richest in such a short period of time. He is riding on the tide of the era!
He led the fintech sector and drove economic growth, but also killed the offline economic sector; he made his associates rich, but he also drove many into poverty; he slammed the system but he refused to be checked by the system; he advocated for fairness, but only he got a green light; he used the banks’ money to make money, but he wanted to overthrow the bank system; he said Chinese banks were outdated but he enjoyed being a loan shark…
The American has been so eager to destroy China’s finance system so as to suppress China. Yet, its plot has failed. This time Jack Ma almost succeeded. Fortunately, we still have smart people in charge to save the finance system from falling. This is a blessing for our country and for our people.

Read some articles circulated on WeChat, now the Ant Group is labelled as a “scam group”. Everyone was jealous about Jack Ma’s success, but in this country with 1.4 billion population, it just takes one week to turn him into a villain.

Analysts anticipate that Ant Group will resume its IPO after Beijing introduces the new set of regulations for the sector. But it remains to be seen whether Jack Ma's reputation will be restored.