A hashtag calling for Duterte's ouster also trended on Twitter 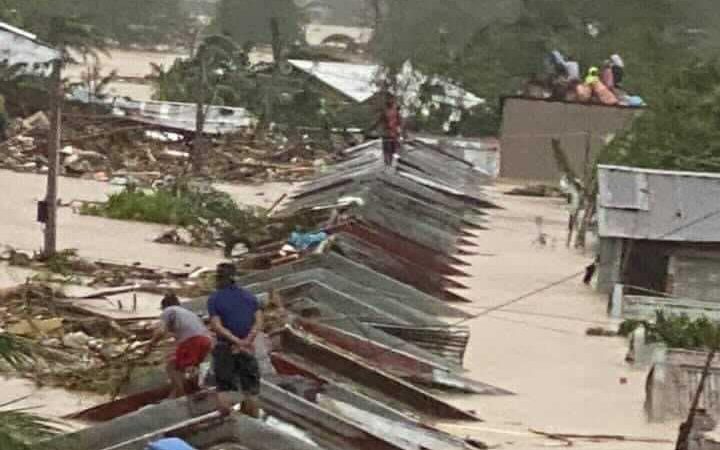 Homes in San Jose, Rodriguez, Rizal east of the national capital Manila are submerged underwater due to Typhoon Vamco (Ulysses). Photo by Anakbayan, used with permission.

#NasaanAngPangulo (‘Where is the President?’) began trending on Twitter as Filipinos criticized President Rodrigo Duterte's absence from the public eye and a lack of government relief efforts following two successive typhoons which hit the Philippines starting on November 1.

Typhoon Goni (or Typhoon Rolly in the Philippines), considered to be 2020's strongest tropical storm, battered Catanduanes Island and parts of southern Luzon in the beginning of November. After President Duterte was conspicuously absent from a government briefing on the typhoon, a briefing which itself was criticized for taking place five hours after Goni made landfall, the hashtag #NasaanAngPangulo began spreading on Twitter.

The tweet above satirizes a photo of Duterte sleeping. The viral photo was often used by Duterte supporters in previous years to show that he's a simple man who doesn't sleep in a luxurious bed.

Malacañang scheduled a 10:00 AM briefing today about #RollyPH. That’s 5 hours and 10 minutes after landfall in Catanduanes. And the Super Typhoon just made a second landfall over Tiwi Albay. Damn. #NasaanAngPangulo

Presidential Spokesperson Harry Roque said no wrong was done since the briefing took place on a weekend. While Duterte himself called his critics “stupid,” saying he had to go home to pay respects to his dead parents on All Souls Day.

#NasaanAngPangulo began trending again on social media after Typhoon Vamco (or Typhoon Ulysses in the Philippines) pummeled the country on November 12, causing some of the worst flooding across the National Capital Region and other provinces on Luzon Island. Despite the recent uproar over Duterte’s absence from the previous typhoon response, he was once again accused of not making appearances or actively coordinating the relief efforts. His officials said Duterte was in fact present at online proceedings of the 37th summit of the Association of Southeast Asian Nations (ASEAN) talking about “climate change and disaster risk management.”

Today is Thursday, not Sunday, today is not Nov 1 for the President to visit his deceased loved ones. You have no excuse to sugarcoat the President's absence for the #UlyssesPH response. We don't want to hear your lame and stupid excuses again. #NasaanAngPangulo https://t.co/JIe8TlYeMr

#NasaanAngPangulo trend doesn't mean that the president needs to directly stop the storm. We need the presence of his leadership, to help, and to protect his people :))

#NasaanAngPangulo? IN THE FUCKING MALACAÑANG GOLF CLUB HOUSE ATTENDING A VIRTUAL SUMMIT WHERE HE WILL TALK ABOUT CLIMATE CHANGE WHILE HE LETS FILIPINOS DROWN BECAUSE OF THE TYPHOON.

When a crisis spans multiple regions, it is the national government that should act.

Since the beginning of this year and every crisis since then to now,#NasaanAngPangulo?

After the typhoon left the country, Duterte assured the public that his government is already on top of the situation. He added in his typical exaggerated way of talking that he even wanted to “swim” with the flood victims “as it was a long time since he last took a bath” but he claimed he was stopped by his guards. Roque also asked Filipinos to just stop asking for the presence of Duterte, adding that asking for accountability was the work of the political opposition. He also added, “…the president is never away, he is always with us.”

But even as Filipinos in Metro Manila and the surrounding provinces were still reeling from the impact of Typhoon Vamco, news about the worst floods in Cagayan Valley in northern Luzon began pouring in. Rainfall from the successive typhoons had filled the Magat Dam and the sudden release of dammed water led to flash floods, submerging large parts of the region. November 13, reverberated with images and sounds of stranded residents pleading for rescue on the rooftops of their flooded homes.

LOOK: Magat Dam opened seven of its spillways on Nov 12 until the morning of Nov 13 when typhoon #UlyssesPH hit N. Luzon. Now, many communities in Cagayan Valley are submerged in water and in need of urgent relief and rescue.

Duterte only appeared on TV the afternoon of the following day, advising stranded residents still waiting for rescue to just wait as “maybe it is still early” and that help is on the way. He lauded “resilience” as a value that allows Filipinos to recover from whatever disaster that comes their way.

No surprise then that the hashtag #OustDuterteNow went viral alongside the calls for help and the hashtag #CagayanNeedsHelp.

In another late-night speech, Duterte focused his ire on Vice President Leni Robredo who he claimed was behind the #NasaanAngPangulo trend. In fact, Robredo never questioned Duterte's absence during the typhoons while her office focused on coordinating relief and rescue operations on the ground. Robredo is a member of the opposition and has been vocal in her criticism against some policies of the Duterte government.

Duterte also condemned students who have been leading calls for academic strikes and breaks in response to the scale of devastation wrought by the typhoons. Calls to end the semester to focus on recovery and relief operations also became calls to oust Duterte whose leadership has been blamed for the suffering facing the nation.

Critics said citizens are largely left to fend for themselves during back-to-back disasters from the COVID-19 pandemic to the recent typhoons. The growing frustration over the Duterte government has spilled over to calls for its ouster even if the next presidential election is still two years away.

What else? Should we wait until 2022?
Let our voices be heard. #OUSTDUTERTENOW#CagayanNeedsHelp