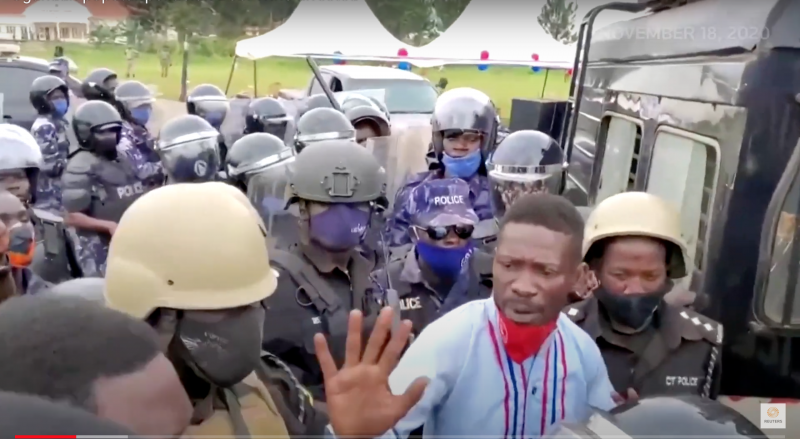 A YouTube screenshot at the scene of Bobi Wine's arrest in Luuka district.

On Wednesday, November 19, several parts of Uganda went into flames with violent riots that left several people killed, following the arrest of Hon. Robert Kyagulanyi, famously known as Bobi Wine, a pop star turned opposition politician, who is running against President Yoweri Museveni in an election slated for January 2021.

Bobi Wine was arrested at a political rally venue in the eastern Uganda district of Luuka, with the police citing that he was holding massive rallies that are contrary to the guidelines given by the electoral commission to curb the spread of COVID-19.

The electoral commission directed that candidates are only supposed to hold meetings with a maximum of 200 people to control on the spread of the coronavirus. Leaders in Bobi Wine’s political party, The National Unity Platform say they always plan for 200 people but people turn up in large numbers to wave and listen to Bobi Wine and they cannot stop them.

The Uganda police confirmed the arrest citing that it was because of the continued violation of the ministry of health guidelines to combat COVID-19.

We would like to inform the public that the Joint Security Task Force in Busoga North, today arrested the NUP Presidential candidate, Hon. Kyagulyanyi Ssentamu Robert, for his continued violations of the @UgandaEC Commission and @MinofHealthUG guidelines https://t.co/QEPY2SDVX2

Several presidential candidates and other influential politicians have come out to condemn the arrests, with some suspending their campaigns until Bobi Wine is released and allowed to hold his rallies.

Mugisha Muntu, a retired general that served in Museveni's government as an army commander and is currently running for president on the Alliance for National Transformation card, said he has suspended all of his campaigns until Bobi Wine is freed.

We have decided to pause our presidential campaign activities until our colleagues, @HEBobiwine and @PatrickAmuriat are released and their freedom to campaign guaranteed.
We call upon government to recognise that this isn't business as usual.#ChangeIsComing#CountryBeforeSelf pic.twitter.com/1VFQlSw5ks

Former presidential candidate Kizza Besigye demanded the release of Bobi Wine and asked the countries funding the Museveni regime to stop funding them, while at the same time calling upon the international criminal court to look into the Ugandan matters.

This is totally unacceptable. Let’s avoid the road to Mogadishu! pic.twitter.com/zkb36eLjTV

Several Ugandans also engaged online with the hashtags #FreeBobiWine #StopPoliceBrutalityInUganda to demand Bobi Wine's release and raise awareness about the happenings in the different parts of the country as major TV stations decided not to air the demonstrations live.

Senior politician Kizza Besigye shared a screen capture of NBS TV, one of the stations that have, in the past, actively broadcasted live proceedings of any major events in the country, airing President Museveni's campaign while many parts of the country were rioting.

MEDIA BLACKOUT of what’s been taking place in Kampala after arrest of presidential candidate Hon Kyagulanyi is very OMINOUS!

Twitter user Faisal shares a story of a woman who was hit by a stray bullet while she was in a 14-seater public taxi.

In Mukono yesterday, Justine Namambo was hit by a ‘stray bullet’ at Seeta trading centre while travelling in a taxi from Kampala. Her crime was waking up & going to work, just like YOU today. If you support this government, this is what you stand for. Shame on you #FreeBobiWine

Journalist Charles Obbo wonders whether the government still stands for the reasons they stood on to oust the former regimes that used to brutalize Ugandans.

Seen enough of the savagery and brutality from photos and videos of the killings & injuries at the “Bobi Wine riots”/protests today. Uganda President Museveni & and the ruling NRM used to speak of past “primitive regimes”. Does it still mean the same thing?

This is the second time Bobi Wine has been arrested in the last month with the first one being shortly after his official nomination to run for the presidency. His car was broken into and he was bundled into a police van that delivered him to his home. The police said it was meant to prevent him from gathering crowds which would easily spread COVID19:

The ruling party, in power since 1986, also has several influential people including musicians that make crowded road drives through districts where their candidate, Yoweri Museveni, would be holding rallies. Opposition leaders have criticized the police for protecting these people while using tear gas and bullets to disperse opposition leaders’ crowds.