'The struggle doesn't end with the moving of this statue' 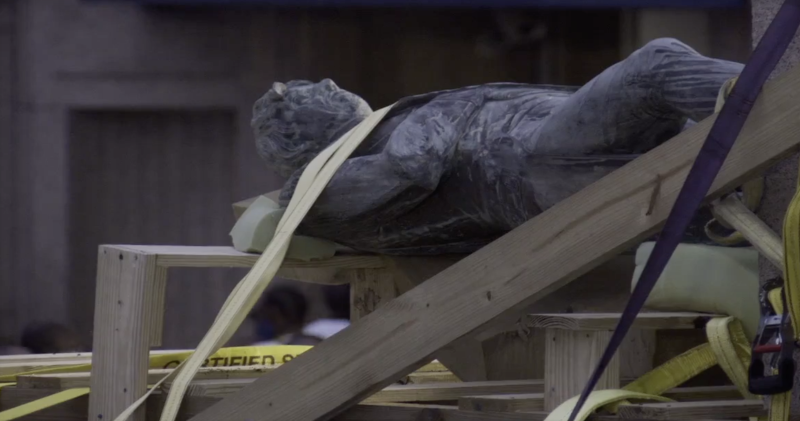 The statue of Horatio Nelson after it was taken down from its plinth in Barbados’ National Heroes Square, on November 16, 2020. Screenshot taken from a Facebook livestream of the event.

Eurocentric history has, for the most part, remembered Vice-Admiral Horatio Nelson as a courageous and astute naval commander. Statuary honouring his accomplishments can be seen around the world, from London's Trafalgar Square to Bridgetown's National Heroes Square, where Barbados honoured him for his victory off Cape Trafalgar during the Napoleonic Wars, which prevented the island from becoming a French colony and protected key trade access to Britain.

On November 16, 2020, however, after years of calls for the statue to be removed because of Nelson's role in the transatlantic slave trade, the Barbadian government has finally decommissioned it. With the national flag flying proudly over the parliament, Prime Minister Mia Mottley presided over the ceremony, which was livestreamed on Facebook. The date is observed as the United Nations’ International Day for Tolerance.

The event, which included performances of music, dancing and drumming, began with a reading by Cyndi Celeste, whose poem “This Space” aptly conveyed a timeline of how colonialism turned the enslaved “from human to cattle, from person to chattel” — and how Barbadians are now reclaiming the space for themselves:

It is interesting how many tales the cobblestones of a place can hold
How many times a space can dawn a new face,
How many new stories unfold:
Watch this space.
Watch the way this square transforms before your very eyes […]

As the statue was lifted off its plinth to the beat of African drums, dancers enacted the horrors of slavery while a singer performed The Mighty Sparrow‘s “Slave.” Barbadians looked on as the bronze cast of the man whom Sir Hilary Beckles, chairman of the Caribbean Community's (CARICOM) Reparations Committee, referred to as “a vile, racist, white supremacist [who] disposed of black people,” was finally brought down from his pedestal. By the end of the performance, there was a palpable sense of a weight being lifted. 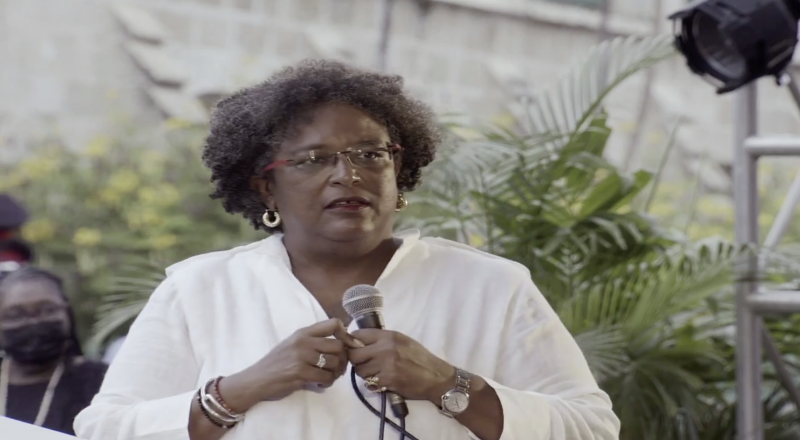 Barbados’ Prime Minister Mia Mottley addresses the crowd at the decommissioning ceremony of the Nelson statue on November 16, 2020. Screenshot taken from a Facebook livestream of the event.

In her address, Prime Minister Mottley said that the statue represented dominance and a display of power, and that its dismantling symbolised the reclaiming of modern-day Barbados:

It is important that we understand that this is a struggle that doesn't end today with the moving of this statue.

She said that an integral aspect of freedom is a liberated mind, and revealed that her phone's screensaver is a photo of Jamaican reggae icon Bob Marley, to remind her that “the mission of our generation is the mental emancipation of our people.” She also praised the work of the CARICOM Reparations Committee, saying that redress is vital for moving forward — for “right things to be done for the wrongs that were perpetrated.”

Noting that Barbados’ history is “not as easy as black and white,” Mottley addressed many of the continued microaggressions that have been handed down as a result of colonialism, including skin bleaching and the policing of black hair:

If we do not know who we are, if we are not clear what we will fight for, then we are doomed to be exploited and to be colonised again, not necessarily in the same way […] but in the way that will allow the mental spaces to be dominated by stories and songs and messages that are not our own, and that are not intended to be able to lift up our people.

While she acknowledged that the statue of Nelson is “an important historical relic,” Mottley said it had no place in Barbados’ National Heroes Square. The plan is to relocate the sculpture, which is more than 200 years old, to a temporary storage site until it returns to public display at the Barbados Museum and Historical Society.

The move is a key step in the redevelopment of Historic Bridgetown, which UNESCO designated as a World Heritage Site. Given Barbados’ intention to remove Queen Elizabeth II as head of state and become a republic before the 55th anniversary of its independence on November 30, 2021, it also represents a symbolic separation from its colonial past.

The ceremony ended with calypsonian The Mighty Gabby singing “Take Down Nelson.”

Spoken word performer Luci Hammans, who participated in Barbados’ march in support of the Black Lives Matter movement on June 13, said on Facebook that she was dismayed about the “absence of recognition for the young people, the recent fighters in this struggle,” who weren’t celebrated “as loudly” as she would have liked — but she also noted the symbolism of the ceremony's inclusion of a Tuk band and stilt walkers:

[…] the choice to play Tuk is not one made lightly. Tuk is our sound of resistance. It is the “engine of the landship,” a survival tactic in which we deliberately display our defiance in the face of colonialism. Those drums and whistles which thundered [Nelson] out of town played the melody of perseverance, the music of generations of black people protecting black people. And I loved to hear it.

Then the Stiltmen, the representation of our ancestors on high looking down on us. A fitting reminder to all of us that we can move him now because of the fight our ancestors started. We are because they were. And I loved to see it.

Barbadian historian Richard Drayton, who is based in the United Kingdom, wrote an article for Third Text journal just over a year ago, in which he compared Barbados’ Nelson statue with that of imperialist Cecil Rhodes in Oxford. He noted that “opponents of the removal of Nelson and Rhodes from their privileged positions in Bridgetown and Oxford have argued that these statues were very old, and were therefore now part of a public culture which should be preserved without revision:”

To remove them would be to “erase” history, in Mary Beard’s phrase. But is leaving these objects as they are not also a kind of historical erasure, a silencing of the past […]?

Is the argument from “heritage” not bound up with an odd contemporary imbalance of attention towards the needs of the present and future vs the legacies of the past, the retrogressive temporality of the neo-liberal moment? The point is not the destruction of “the past,” as if there was ever one monolithic uncontested past, but the renegotiation of which past the present holds up to its face.

In a Facebook update posted after Nelson was removed, Drayton observed that “2020 has broken the spell of the past:”

There is an odd feeling emanating from that now empty plinth. It does feel like a magic spell has been broken. The forbidden has been done […] a powerful energy is being released from where the idol has been broken.