How Japan followed the US presidential election 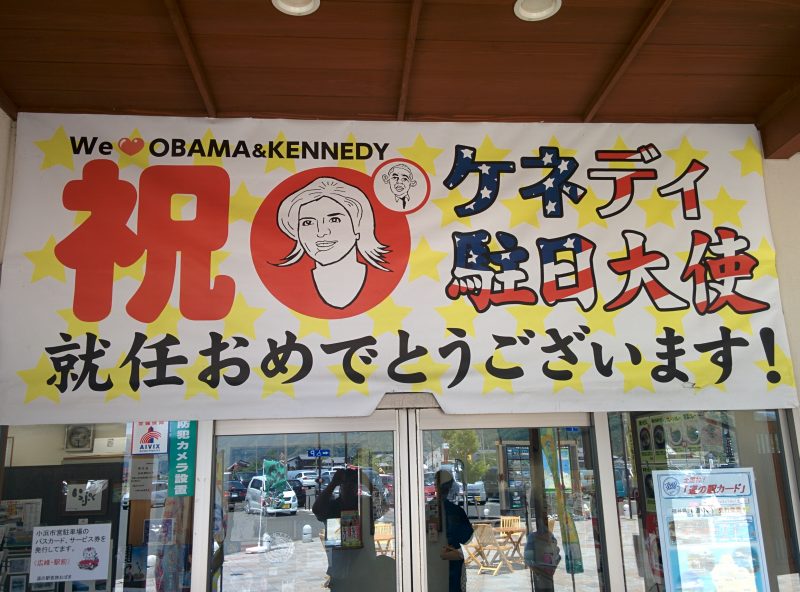 “Congratulations to Caroline Kennedy on her appointment as US ambassador to Japan.” A banner at Obama train station in Fukui prefecture. While Kennedy had served as ambassador to Japan since 2013, the banner still remained in place until at least May, 2016. Photo by Nevin Thompson. Image license: Creative Commons Attribution 3.0

To get away from social media and election night, I took a long walk in the chilly November gloom through my neighborhood. Stretching up into the pitch-black dank darkness of late afternoon, nearly every window in every apartment tower or condominium block was lit up with the glow of gigantic flat-screen televisions, all displaying the identical talking heads and the red and blue election results of CNN. Even in Canada, the election was inescapable.

Returning home, our big screen TV was dominated by Minecraft, not CNN. The stereo in the kitchen played not the news, but an old album by Okuda Tamio as we prepared dinner. My wife, like many people in Japan, follows US politics, but keeps her opinions to herself. The tension I had felt about the election before going for a walk and going offline temporarily evaporated.

In Japan, Trump is not always regarded with the dismissiveness or loathing that is so common in the United States or even in Canada. While coverage of the US election dominated Japanese media for the week or so during and after the election, the presidential race was treated as a spectacle, with little of the existential angst common in Western media. Who would win?

If there are any worries about the U.S. election, they are generally limited to whether or not President-elect Joe Biden will forsake Japan and pivot (or “suck up“) to China. It's hard to tell if this is a serious worry, since the people most likely to express fear about Joe Biden's supposedly close links to China are ultra-right-wing cranks, such as disgraced politician Tamogami Toshio, or celebrity plastic surgeon Takasu Katsuya, a shameless neo-Nazi who, because of his clout as an advertiser, still remains a popular commentator on Japanese television.

While there was serious discussion about the election, by the day after the election, when it looked obvious that Joe Biden would, indeed, win the election, a sense of whimsy started to prevail.

For example, on Twitter, someone noticed how a food court in central Osaka could be easily renamed to take advantage of the incoming president:

NOTE: 梅田 in Osaka, pronounced as UMEDA, could also be pronounced BAIDEN. So, here we have the SHIN-BAIDEN (umeda) SHOKU-DO-GAI, or “The New Biden Food Court”. The 新梅田食道街 is actually an expansive collection of eateries beneath Osaka's main rail hub.

An actual politician named “Jo Baiden” and a “Baiden” bus stop were both unearthed in rural Japan. Meanwhile, production of Joe Biden masks was dramatically increased in Japan following the election, while a restaurant chain created a “Biden Burger” to fete the new president-elect:

Japanese restaurant makes its US election projection with the Biden Burger https://t.co/HC5vOM8bOH

Sometimes, it seems that for most average Japanese people, awareness of American politics comes down to simple name recognition. For example, when Barack Obama was elected US president in 2008, at least two rural towns in Japan attempted to take advantage of the presidential name.

The rural hot spring town of Obama in Nagasaki prefecture adopted its namesake president. Years after his presidency, a likeness of Barack Obama still graces hand towels and other tourist kitsch for sale in gift shops all over town. A crude and somewhat ludicrous Barack Obama manikin welcomes visitors to the backwoods hotspring resort. 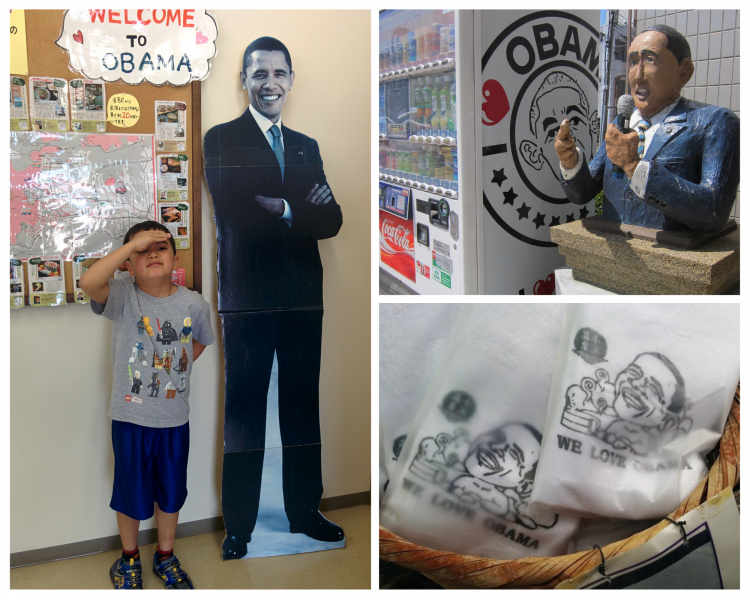 US president-themed tourism kitsch in Japan. Images, clockwise from top right: A Barack Obama-branded vending machine paired with a bust of the former US president, in Obama, Fukui; Barack Obama-branded washcloths for sale at Obama Onsen, in Nagasaki prefecture; a life-size cardboard cutout of Barack Obama, located in a tourist visitor center in Obama, Fukui prefecture. Photos taken in 2016 and 2017 by Nevin Thompson.  Image license: Creative Commons Attribution 3.0

Nearly one thousand kilometers to the east, in Fukui prefecture, the city of Obama, a seaside fishing town on the Japan Sea, north of Kyoto, developed an entire branding campaign that featured the American president. An Obama-inspired logo was slapped on everything from traditional sweets to vending machines.

Presumably capitalizing on its tenuous connection to the president, Obama, Fukui attempted to form a relationship with Caroline Kennedy, US ambassador to Japan from 2013 to 2017, but it's unclear if anything happened. The presidential-themed souvenirs are still in gift shops.

Meanwhile, the media started to compare the golf handicaps of Japan's prime minister with the president-elect:

Wall-to-wall hourly coverage of the presidential election notwithstanding, Japanese TV has now moved to the serious business of comparing golf handicaps … for that all important diplomacy. Trump 3, Biden 10, Suga 30. pic.twitter.com/tVX6nvCd5N

In any event, the relentless sense of anxiety about the election that has been so common in the media, on social media, and even in the workplace across North America seems to be toned down in Japan.

To a large degree, Donald Trump is not the polarizing figure in Japan he is in the United States, and is more of just another media personality, if not a way to sell more tourist kitsch. Why not?

For one thing, the United States tends not to dominate the media in Japan quite like it does in other places. Japan is also an ocean away from Donald Trump, and the country has its own obsessions and concerns, including continuing to deal with the COVID-19 pandemic and ward off the resulting economic collapse.

It's also possible that, in the context of Japanese politics, Donald Trump isn't particularly unusual. With his gauche clothes, obvious wig, and generally bombastic, mean-spirited, incurious worldview, Trump is like any of the male Japanese politicians who typically run the government.

Now, two weeks after the election, media coverage of Donald Trump and Joe Biden has mostly receded, and has been replaced by stories about the star-crossed love life of a Japanese princess, how COVID-19 will affect a popular annual “naked festival“, and a potential new vaccine that could end the pandemic.

In short, Japan has moved on from Donald Trump. Hopefully, the rest of the world will, too.