Thai LGBTQ+ activists and pro-democracy protesters march together for equality

They also state demands for reforms of the Thai monarchy 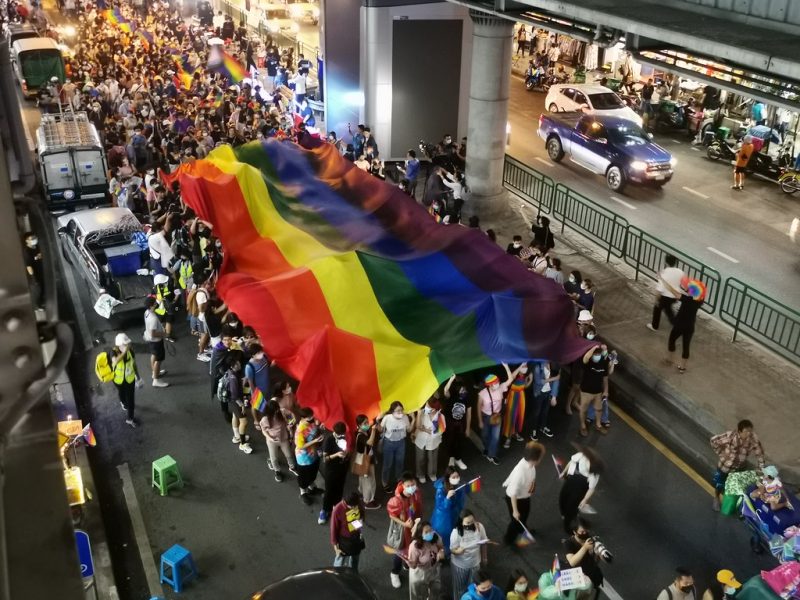 Protesters holding a large Pride flag as the march move onto Silom Road. Photo and caption from Prachatai

Thai women, members of the LGBTQ community, and pro-democracy protesters joined a Pride parade on November 7 in Bangkok to call for equality for all marginalized groups, as well as for Prime Minister Gen Prayut Chan-o-cha’s resignation, a new constitution, and monarchy reform.

The march, organized by the gender equality activist groups Seri Toey Plus and Women for Freedom and Democracy, started at the Samyan intersection in central Bangkok. Carrying several large rainbow flags as well as placards calling for gender equality, marriage equality, abortion rights, and legalization of sex work, protesters marched along Rama IV Road, before stopping on Silom Road, a landmark in the center of the city.

During the march, the Women for Freedom and Democracy group, joined by a group of drummers from the theatre group B-Floor, organised a performance of a Thai version of the Chilean feminist anthem “A Rapist in Your Path” to protest against sexual violence, victim blaming, and rape culture.

Originally conceived by the Chilean feminist collective Las Tesis and sung in Spanish, the song has been translated and sung at women’s rights protests across the world as a way of speaking out about sexual violence and the patriarchal power structure that represses women.

The Thai version was translated by the Women for Freedom and Democracy Group. The lyrics state that “the state that ignores our voice is the state that rapes us”, and name “the police, the military, the courts of justice, the entire country, the monarchy” as complicit in gender-based violence.

The Thai version also uses imagery from the Sanskrit epic Ramayana, which is also popular in Thai culture. The story refers to Rama’s wife Sita, who was forced by her husband to walk through fire to prove her purity after her long captivity by Rama's rival Ravana. 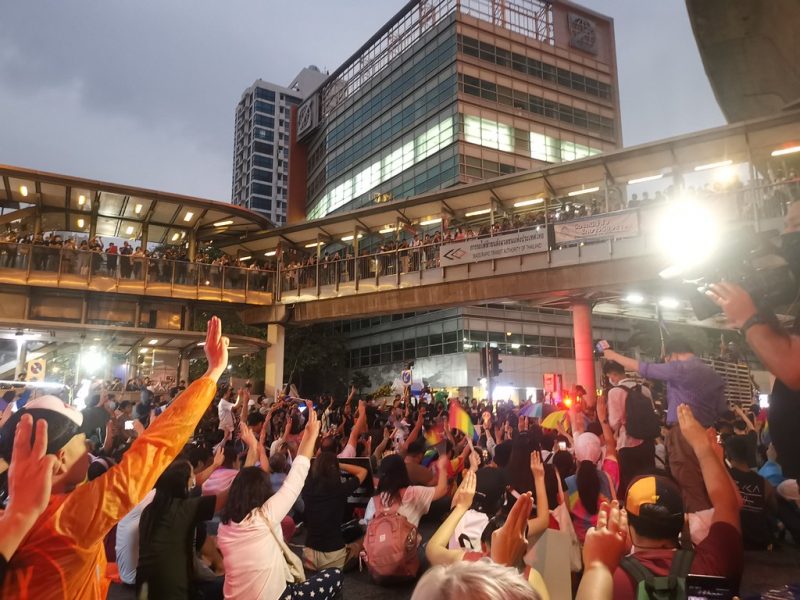 Arriving at the Saladaeng Intersection, the protesters sat down and hold up their hands in the three-finger ‘Hunger Games’ salute while the national anthem is played from speakers on the truck leading them. Photo and caption from Prachatai

The march stopped under Bangkok skytrain Saladaeng BTS Station, where protesters used the truck that led the march as a stage for dances and speeches on various social issues, such as legalization of sex work, abortion rights, gender-based discrimination in STEM fields, sexual harassment against women activists, being LGBTQ in a Muslim community, ethnic group and immigrant rights, and the patriarchal power structure in the Thai monarchy. The event included a performance by a group of drag queens.

The activists also spoke out against sexual harassment and called for women and LGBTQ people to be represented on protest stages, and stated the pro-democracy movement’s three demands, which are Gen Prayut’s resignation, a new constitution, and monarchy reform.

LGBTQ rights and sex worker rights activist Sirisak Chaited dressed in a towel with the message “sex work is not a crime” during the march to call for the legalization of sex work. Photo and caption from Prachatai