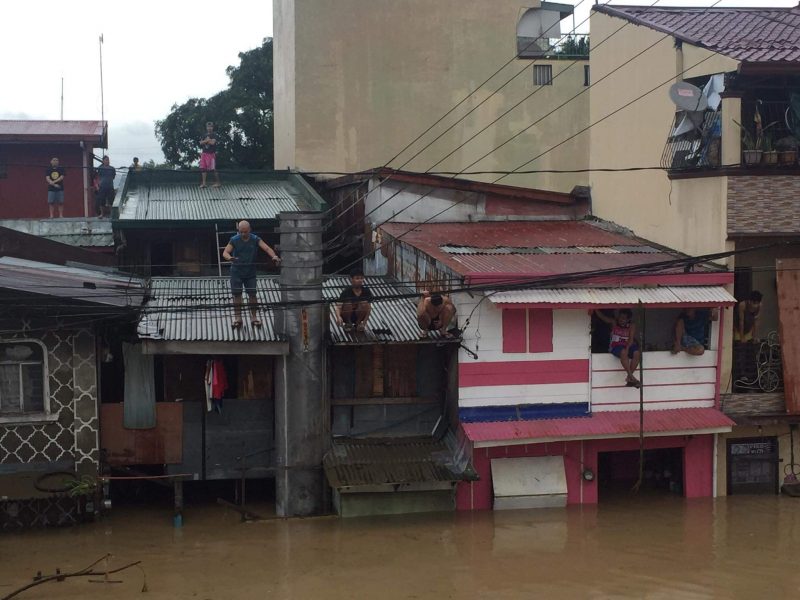 The flooding disaster which hit the eastern stretch of Luzon Island, including several cities in Metro Manila, was described by residents as the worst in years. Photo by Altermidya

This article by Raymund B. Villanueva was originally published on Kodao, an independent news site in the Philippines. An edited version is republished on Global Voices as part of a content-sharing agreement.

Many Filipinos have found a novel way of sending immediate aid to victims of the ongoing floods affecting Luzon, the Philippines’ largest island, caused by Typhoon Vamco (known as Ulysses in the country): free cellphone load.

Across the Philippines, the majority of cellphone users rely on prepaid load. They need to load or top up a certain amount in order to send SMS or access the internet. The system also allows sending or receiving a load from another cellphone user.

This is precisely what Michael Ramos Pagulayan, who is originally from the Isabela province in Luzon but now lives in Manila, decided to do: He offered to send 50 Philippine pesos (1 US dollar) worth of cellular load to those who need them in his home community of Auitan, San Pablo, Isabela.

I try to help because I have no way of going home because of the coronavirus pandemic restrictions. I can’t fly home, I can’t drive. So I thought of sharing mobile phone loads to flood victims who need to contact relatives here in Manila.

Not many have taken up his offer, however, probably because they have run out of batteries or have no mobile phone signals.

Pagulayan's home community in Auitan has been underwater since November 12 in what many of its residents say is the worst flooding in decades. Many victims in the community have been staying on their roofs as rescue efforts are frustrated by strong currents.

Anna Balasbas who resides in Pasay City in Metro Manila, also gave 30 to 100 pesos (0.6 to 2 USD) cellular phone loads to nearly 30 flood victims from the Cagayan and Isabela provinces of Luzon.

Mobile phones are a reliable way for families to exchange information during disasters in the Philippines when power and communication services break down by strong winds and flooding, as this image posted on Twitter shows:

CAGAYAN VALLEY NEEDS HELP. Unprecedented flooding is being experienced by communities in Central Isabela and Aparri, Cagayan after seven floodgates of Magat Dam were opened due to heavy rains brought by #UlyssesPH.

Communication as disaster aid and relief

Ares Gutierrez, an officer with the Quezon City Disaster Response and Relief Management Council that coordinates city relief operations in that part of Metro Manila, says communications is the most crucial yet oftentimes neglected area in disaster and emergency management.

Communications bridges everything. Disaster managers need an efficient communications system to enable them to efficiently coordinate response efforts and save more lives.

Gutierrez said timely and frequent communication also prevents disinformation and assure the public that help is on its way.

Effective communications from the ground up will also enable decision-makers to determine whether response plans are working or need calibration, as well as what type of further assistance is needed, he said.

In times of disaster, the public wants to know how or where they can get help, what risks or dangers they face, and how they can protect themselves and their families.

Gutierrez, a crisis and disaster risk management expert, said citizens offering mobile phone loads is indeed a way of compensating for the perceived lack or breakdown of disaster communications.

Humanity kicks in when you see people crying for help. You want to jump in and help. Sharing cellphone credit can be a lifesaver.

Gutierrez, however, warned that such gestures are useless if the phone network is totally down.

A disaster-prone country like ours should have all types of communications platform in place so we don’t get cut off during crucial moments.

Gutierrez also urged the government, the private sector, and the academe to act together to implement the many disaster preparedness and communication plans that languish on the drawing boards of various institutions and lack implementation.