The pandemic in Bangladesh through the lens of its independent filmmakers 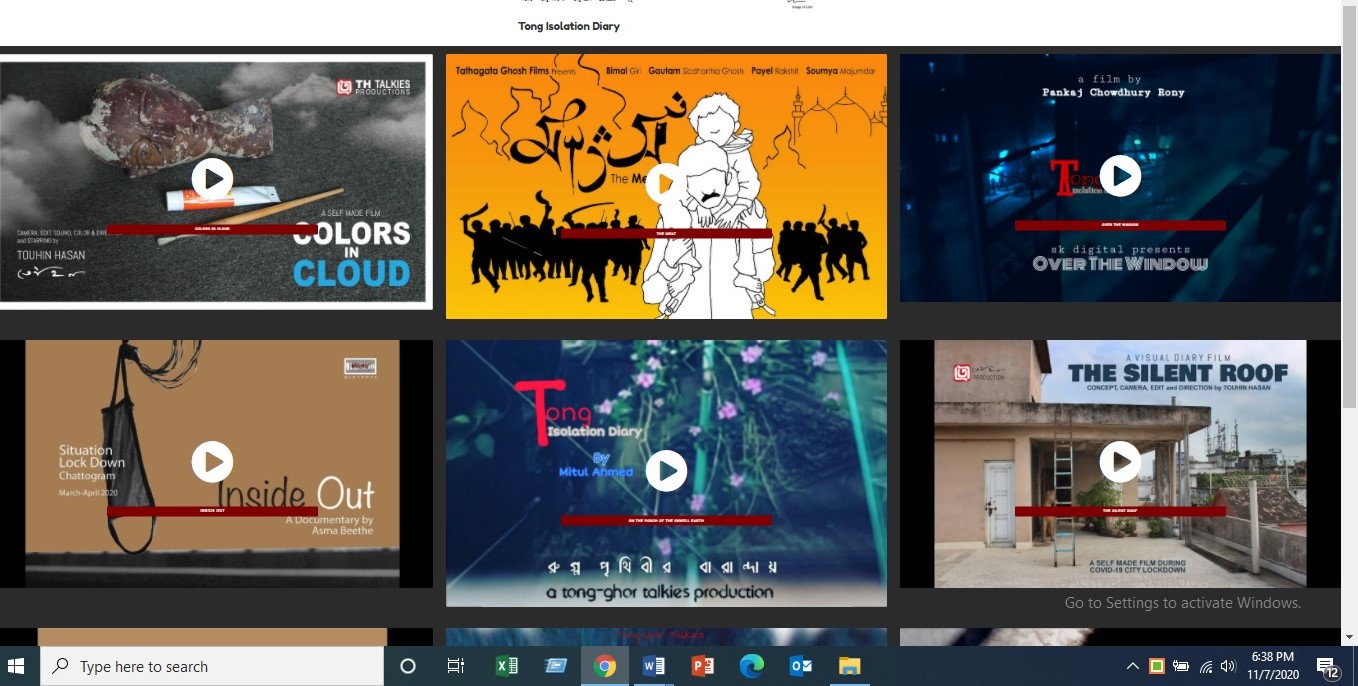 Short films of the “Tong Isolation Diary” series capture people's lives during the pandemic. Screenshot from the Tong-Ghor Talkies site.

Things have been tough for filmmakers in Bangladesh. COVID-19 restrictions disrupted much of the film production industry and, although movies theatres reopened in October after a seven-month shutdown, halls remain mostly empty as the pandemic rages on.

Confined to their houses, many filmmakers are doing movies about just that — coping with the pandemic.

Among those films, there is “Tong Isolation Diary” by filmmaking collective Tong-Ghor Talkies. It's a series of nine short films, portraying different characters and their lives in the COVID-19 pandemic.

Tong-Ghors are the small tea shops that line the streets and lanes of Bangladeshi cities and where both ordinary people and creatives gather to meet friends, discuss the latest news, or just relax.

Global Voices (GV): Could you talk a little about how the idea for the “Tong Isolation Diary” series came about?

Zuairijah Mou (ZM): Since the very beginning of the pandemic, the Tong-Ghor team thought of capturing the lives of people affected by COVID-19 through film. So we coined the term isolation diary and began work on the series. In April 2020, we released the first film of this series. Following that we started releasing other films of the series one by one. We have so far released a total of nine films from Bangladesh and West Bengal, India under the “Tong Isolation Diary” series.

GV: One of the films produced by your team is called “Landscape of Soul,” in which the main character is seen dancing in isolation. What does that mean to you?

ZM: In this series, we have two films produced by our team. “Landscape of Soul” and “On the Porch of the Unwell Earth.” The second film has been produced by Mitul Ahmed, a founding member, director and producer of Tong-Ghor Talkies.

“Landscape of Soul” is basically a dance film (this genre exists in a lot of festivals or websites in the international arena, but we haven't seen much work on this in Bangladesh).

The film was released on the International Dance Day. We wanted to portray the psychological state of a unique person, especially during the pandemic, through music and dance. At least, I wanted to see if this creativity resonates some response in the viewers’ minds.

GV: You have highlighted films of Bangladeshi as well as Indian producers. Is there an intention to highlight stories of a pandemic-stricken world that transcends geographical boundaries?

ZM: We have previously released short films from various countries on our YouTube channel and website. In January 2020, we did an online distribution of short films from Iran, Afghanistan, Tajikistan, Turkey, United Kingdom, Morocco, Italy, Sri Lanka, Egypt and some other countries, cities and places. We have released four international short films on March 2020 celebrating the International Women's Day.

In the Tong Isolation Diary series, we focused primarily on Bengali language films. We wanted to see how the filmmakers from in Bangladesh and West Bengal, India wanted to portray the effects of COVID-19 in peoples’ lives.

Two Bangladeshi producers, Asma Beethe and Debashish Majumder, released their first films in the “Tong Isolation Diary” series, which is also our achievement and we are proud about it.

GV: Why did you choose YouTube as a platform for online distribution? Although this presents the opportunity to reach more people across geographical boundaries, the videos did not generate many views. What do you think is the reason behind this?

ZM: We have released the short films for online distribution both on YouTube and our website. There is, of course, a goal to reach out to a wider section of viewers. But at the same time, we know that the audience of independent short films is limited, especially for the kind of films we are making. We have released films covering a variety of genres from different countries, including those screened at prestigious international film festivals. We feature a variety of non-fiction films — however, it appears, there are not many people around the world interested in these films. There is another thing: although Tong-Ghor Talkies has been producing since 2017, we have started film distribution from only January 2020. The response we have received so far from the audience has been our inspiration.

GV: What do you think are the current challenges the independent filmmakers face in Bangladesh?

ZM: I think its only fair to look at the challenges from the individual level rather than focusing on the whole industry. What would be the presentation of a good story or idea/topic, what would be the filming style — that varies from filmmakers to filmmakers. I think we need to take a deep look at what story we need to feature and how we want to portray it — those are very important. And the funding issues have always been there; still is a big challenge. There is nothing more to say about this.