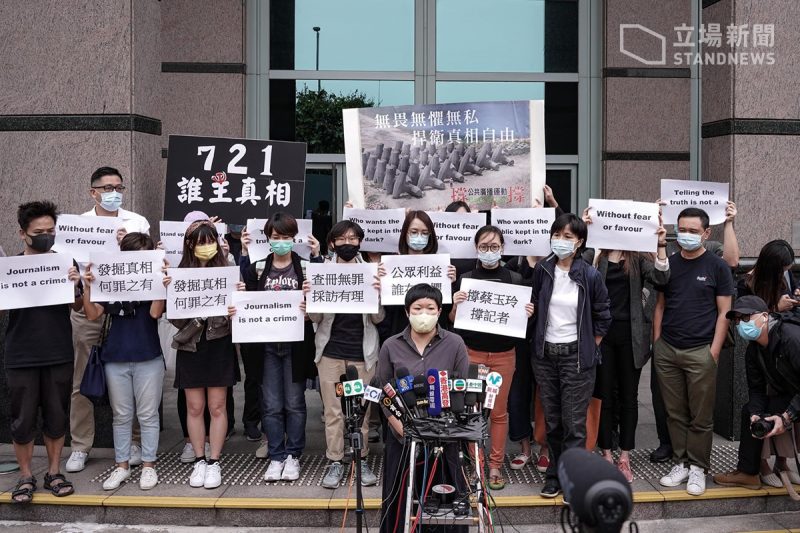 RTHK's freelance producer Bao Choy speaks with reporters in front of a court on November 10. She faces charges under Hong Kong's Road Traffic Ordinance in a case ostensibly politically motivated. Protesters chanted “journalism is not a crime.” Image from the Stand News. Used with permission.

The following post was written by Rachel Wong and originally published on Hong Kong Free Press (HKFP) on November 11, 2020. This edited version is published on Global Voices under a content partnership agreement.

Last week, police arrested freelance TV producer Bao Choy Yuk-ling under allegations that she made a false statement to obtain information on car owners, claiming that she had violated the Hong Kong's Road Traffic Ordinance. Choy obtained the information during her reporting for the documentary “7.21: Who Owns the Truth,” aired on the program Hong Kong Connection.

The documentary investigated individuals potentially involved in the Yuen Long attacks of 2019, in which a pro-Beijing mob of over 100 men stormed the Yuen Long MTR station wielding steel rods and canes and attacked protesters returning home from an anti-extradition demonstration. The incident left 45 people injured, including journalists and commuters, and became one of the most notorious events of Hong Kong's year-long protests.

Using surveillance footage from the nearby area, the documentary producers were able to track down the legal owners of the cars who took the rod-wielding men to Yuen Long.

Hong Kong reporters have for years used car plate records in their reporting for media outlets of different political camps, most commonly by crime, traffic, and entertainment beat reporters. Choy is the first to be arrested for the practice. If convicted, she could face a HK$ 5,000 (645 USD) fine and six months’ imprisonment.

Choy – who appeared in court on November 10 – told reporters her case was no longer a personal matter but involved the public interest and press freedom. Dozens of members of the media gathered outside the court to show support. Her case was adjourned to January and she remains free on bail.

But this wasn't the first time the government appeared to have cracked down on RTHK, which in theory enjoys editorial independence despite receiving public funding and has traditionally been allowed to cover politically sensitive topics.

Amid the political turmoil since the pro-democracy movement erupted last year and the national security law was enacted in July, the public broadcaster has been under fire from various quarters as the government appears to tighten its grip. Below is a list of some of the recent developments.

Most of RTHK staff is employed on civil service terms. The government has decided that all those who joined the civil service on or after July 1, when the national security law came into force, should pledge allegiance to the Hong Kong Special Administrative Region and promise to uphold its constitution known as the Basic Law.

In addition to newcomers, the requirement also applies to existing staff members whose employment is confirmed after completing probation, when contracts are renewed, or when they are up for promotion.

Questions arise as to whether the public broadcaster can stay impartial in its reporting after staff have been compelled to pledge allegiance to the government.

The public also raised eyebrows when the deputy director of broadcasting Kirindi Chan resigned in June after serving less than a year in the position. She cited health and personal reasons.

At that time, the broadcaster was criticized for airing a 20-episode programme about the national security law that was perceived to be sympathetic to Beijing. The program attended a direct request by RTKH's government-appointed advisory board, who instructed the broadcaster to ease public concerns about the then-looming law.

Chan served more than 30 years at the broadcaster and had overseen numerous current affairs shows, but in her latest position, she was not directly involved in the production of the controversial programmes.

Amen Ng, director of corporate communications and standards at RTHK, said Chan’s main duty was administration and the decision was not political.

RTHK has also come under pressure to rein in reporters who ask “disrespectful” questions of senior officials.

In September, the public broadcaster reopened an investigation into Nabela Qoser, an assistant programme officer who had provoked complaints from the public when she confronted the city’s leader Carrie Lam at a press conference after the July 21 Yuen Long mob attack on MTR travellers.

Lam was asked: “Did you learn about it only this morning? Were you able to sleep well last night?” and Qoser also asked her to “speak like a human.”

An initial investigation found that Qoser had done nothing wrong, but shortly before completing her three-year probation period, she was informed that it would be extended for another 120 days for further inquiries.

Union chair Gladys Chiu slammed the decision and said asking difficult questions should not hinder a reporter’s prospects of promotion or confirmation of employment. Lam refused to comment on the case, which she described as a human resources issue.

Interview with WHO top adviser criticised

In March, RTHK News programme The Pulse was criticised by the Hong Kong government for allegedly breaching the One China policy after its producer Yvonne Tong asked questions about Taiwan’s efforts to join the World Health Organisation.

In a video call, Tong asked the WHO’s Dr. Bruce Aylward to comment on the Taiwan government’s performance in containing the COVID-19 pandemic, and whether the organisation would reconsider the island’s membership. Aylward appeared to have hung up the call and evaded the question after reconnection.

Secretary for Commerce and Economic Development Edward Yau said the programme breached the principle that there is only one sovereign China. The Director of Broadcasting Leung Ka-wing should be held responsible for RTHK‘s deviation from its charter, Yau added, and RTHK should educate the public about One Country, Two Systems.

Review team set up, pressure by advisory board

In July, the Commerce and Economic Development Bureau set up a team to review RTHK’s governance and management, following the Communications Authority’s findings of bias, inaccuracy and hostility to the police force.

The review aimed to ensure the broadcaster complied with the service charter and codes of practice on programming standards issued by the authority. Charles Mok, the lawmaker representing the IT sector, said he feared the review would compromise the station’s editorial and creative freedom.

In May, the satirical show Headliner received a warning from the Communications Authority after the authority ruled as “substantiated” complaints that an episode aired in February had denigrated and insulted the police force.

The episode implied that police had more protective gear than healthcare staff when the COVID-19 pandemic first emerged.

Eventually, the 31-year-old show suspended production after airing the final episode in June.

In April, the Communications Authority warned the broadcaster over its personal view programme Pentaprism, after it substantiated complaints that an episode contained inaccuracy, incitement of hatred to the police and unfairness. It featured a guest host who criticised the police handling of unrest around the Hong Kong Polytechnic University in November last year.

Complaints about four other episodes which featured guest hosts commenting on police anti-protest operations were also substantiated in September. RTHK decided to suspend the programme in early August, before it received the warnings.

National anthem to be aired every morning

The latest development is that starting from November 16, 2020, the Chinese National Anthem – March of the Volunteers – will be aired at 8am every day ahead of news reports on all RTHK radio channels.

Spokesperson Amen Ng said that according to its charter, the public broadcaster should enhance citizens’ understanding of One Country, Two Systems and nurture their civic and national identity. The new arrangement is necessary, she said.