What election observers are saying about Myanmar’s election

Myanmar conducted its election on November 8 which was described by official observers as peaceful despite several challenges that threatened to undermine the voting process.

The Myanmar-based People’s Alliance for Credible Elections (PACE), the Thailand-based Asian Network for Free Elections (ANFREL), and the United States-based Carter Center have already released preliminary reports with their observations. All of them acknowledged the “success” of the elections while noting reforms that still need to be enacted to make the process more credible and inclusive in the future.

Myanmar was under a military regime for several decades until a civilian-led government ushered in the country’s democratic transition in 2010. During the 2015 election, the opposition National League for Democracy (NLD) clinched a historic landslide victory by defeating Union Solidarity and Development Party, a military-backed party.

Based on unofficial results, the NLD continued to dominate this year’s election. This could be interpreted as another vote of confidence for the leadership of NLD which is headed by Nobel Laureate Aung San Suu Kyi. It could also mean that the majority of voters continue to reject the return of the former ruling party established by retired military officials.

But the re-election of NLD does not mean the military has already lost power and influence in the government. The military-drafted 2008 Constitution has guaranteed that the Tatmadaw (armed forces) will get 25 percent of the seats in Parliament as well as retain key positions in the government like defense and border control.

Global Voices has published articles which echoed some of the key issues highlighted by election observers such as the censorship of campaign speeches, the cancellation of voting in several ethnic communities, the disenfranchisement of the Rohingya ethnic minority, the rise of religious nationalism during the campaign period, and the restriction of free speech targeting critics and activists.

What follows are additional issues included in the reports published by PACE, ANFREL, and The Carter Center.

PACE deployed 1,888 short-term-observers on election day. Aside from recognizing that voting was peaceful, it also noted that health protocols were enforced in polling stations. 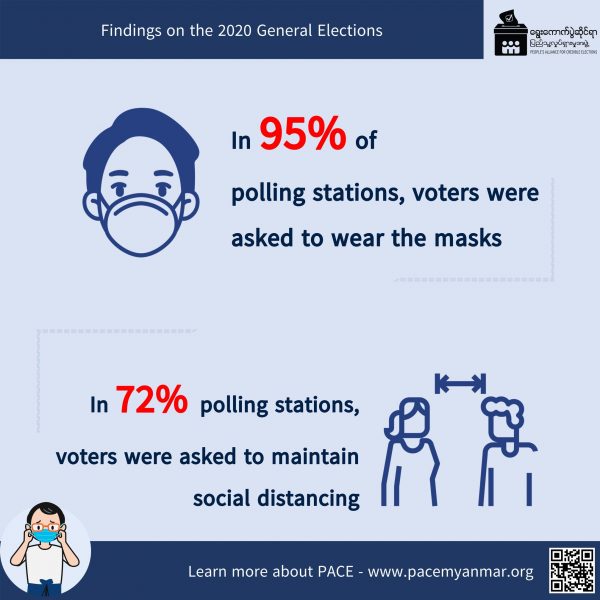 Health protocols were observed in polling stations, according to the monitoring of PACE. Source: Facebook

This created an uneven playing field between those who have better access to financial resources, media and social media and those with limited resources, as well as between incumbent and the rest of the parties.

Its observers reported some inconsistencies in the implementation of polling procedures but it also concluded that “the integrity of the vote was not affected.”

ANFREL welcomed some adjustments in the voting procedure as an improvement in comparison to the 2015 election:

…a few welcome revisions were made to election by-laws, for instance enabling internally displaced people, migrant workers and students to vote more easily in their area of temporary residence, and prohibiting polling stations located inside military compounds.

It also identified a possible reform that can allow members of religious orders to vote:

Another unfortunate feature of the legal framework for elections is the entrenched disenfranchisement of large sectors of the population. First, Article 392(a) of the Constitution disenfranchises all members of religious orders, whose numbers are considerable: the Buddhist clergy alone accounts for well over half a million people. Christian and Hindu priests or nuns are also unable to vote.

Meanwhile, The Carter Center had 43 observers who visited 234 polling stations in 10 states and regions. Their overall impression reflected the reports of PACE and ANFREL: “…voters were enthusiastic and able to freely express their will at the polls and choose their elected representatives.”

There were election-related violent incidents but these were considered isolated cases:

The campaign environment was generally calm and peaceful. However, there were isolated instances of clashes between party supporters, leading to one death, as well as acts of vandalism and destruction of campaign materials in several locations.

However, the Carter Center recorded online violence during the campaign which targeted women candidates and an LGBTQ+ candidate:

Despite most reports affirming the success of Myanmar elections, the USDP said the results are tainted. It is now demanding that a new election should be held under the supervision of the military.