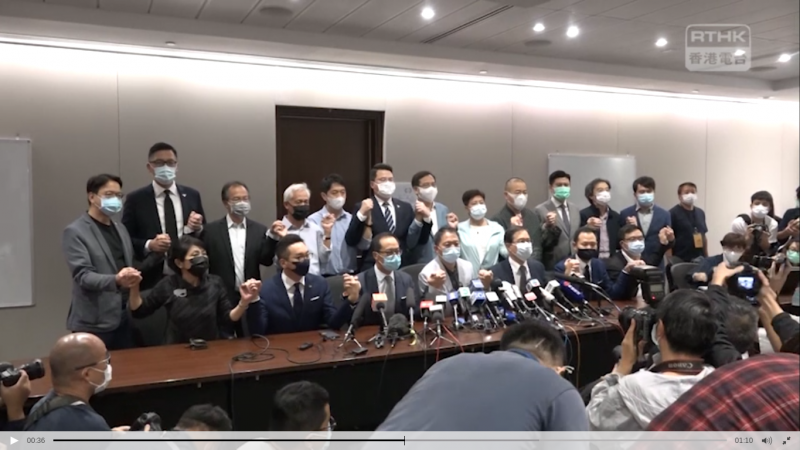 All of Hong Kong's pro-democracy lawmakers resigned from the Legislative Council (LegCo) on November 11 in solidarity with four colleagues disqualified by a new directive issued by Beijing.

Passed by the National People’s Congress’s Standing Committee (NPCSC), the directive allows the Hong Kong government to unseat elected lawmakers if they “breach of the oath of allegiance” to the Special Autonomous Region.

This unprecedented, authoritarian decision by Beijing has effectively crushed Hong Kong's opposition in the legislature.

Chinese state news agency Xinhua reported that the directive was passed in response to a request made by Hong Kong’s Chief Executive Carrie Lam herself. Meanwhile, Lam suggested that she is merely following Beijing's orders. Radio Television Hong Kong reports:

Chief Executive Carrie Lam hints that more public officials could be thrown out of office, with decisions to be made “in due course”. But she says Beijing was behind today's Legco disqualifications and her role was only to announce the news. #HongKong https://t.co/640xBgquGA

Lam also appeared to be satisfied with the mass walk-out. Alvin Lum, a reporter with independent outlet Citizen News, highlighted one of the Chief Executive's remarks in the press conference this Wednesday:

QUOTE OF THE DAY- Carrie Lam: “there is nothing to be shameful about [facing a Legco with no opposition], we are more excited when bills are passed more efficiently.”

At another press conference, the leader of the Democratic Party Wu Chi-wai announced the collective decision of pro-democracy lawmakers to resign:

It [the NPCSC’s directive] reflects that the central government has completely given up on the Basic Law and One Country, Two Systems… Democrats are facing a whole new set of circumstances. In view of our colleagues who were ousted today, all democrats decide to stand with them and resign en masse. The move will not frustrate us, as we know democracy will not be achieved overnight. The road to democracy is especially long when confronting an authoritarian regime. But we will not be defeated by pressure and oppression. We will find a new way.

It is likely the last time Hong Kong democracy figures speaking at the city’s legislature as they are expected to resign collectively. In this historic time, the room is flooded with journalists trying to capture the lawmakers’ last stay. #HongKongProtests Photo: @maksphotograph5 pic.twitter.com/WzRcc2VRZC

Benedict Rogers, the founder of the London-based advocacy group Hong Kong Watch, said Beijing has turned the Hong Kong legislature into a rubber stamp, like the National People's Congress:

And with this step #Hongkong #LegCo is forced to more closely resemble #China #NPC. Beijing is clearly moving to create only the LegCo it wants and failed to achieve through other means. @hrw @hrw_chinese https://t.co/sbmE39I1tt

Activist Joshua Wong, who, along with 11 colleagues, was barred from running in the November district council elections, said that the new directive could prevent pro-democracy candidates from contesting future polls:

4/ Accusing candidates including myself of “soliciting interference by foreign government” with fabricated allegations, four lawmakers were banned from the election in July. They are now unseated on the same ground. pic.twitter.com/OHplIaImyu

NOW: Today, the #NPCSC and HKSAR Chief Executive handed down a death sentence to Hong Kong’s #LegCo and political system.

By banning legal legislative tactics like filibuster and quorum calls, CCP strips away the very last shred of the legitimacy of Hong Kong’s political system. pic.twitter.com/v3yJMbAvrg

China has completed its takeover of Hong Kong’s legislature https://t.co/WfHBlmCfTx