With millions of tweets, Brazilians show fervor for transparency, equality and anti-racism 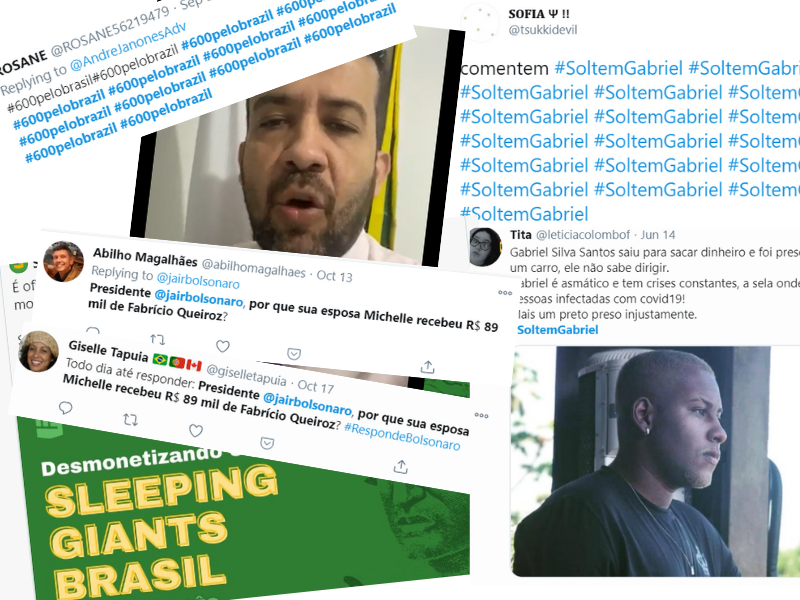 Montage of screenshots of tweet campaigns, made by Global Voices.

During the pandemic, in-person protests around the world have gone digital due to confinement and social distancing measures. In Brazil, people have been coming together around hashtags and live sessions on Facebook to make themselves heard in 2020.

Here are four examples of how Brazilians have questioned corruption, racism and inequality in Brazil during the pandemic:

A subtle question about corruption repeated a million times

The controversy began during an official visit by President Bolsonaro to the Brasília Cathedral on August 24. A reporter from O Globo asked the president about the origins of 89,000.00 BRL (about 15,719.11 US dollars) which was deposited into his wife Michelle Bolsonaro's account. In response, the president verbally threatened the reporter by saying, “I feel like punching you in the mouth”.

On Twitter, the journalist's question was repeated more than one million times in less than 24 hours and became the most discussed subject on the platform in Brazil during the month of August. This data was obtained by a survey conducted by professor Fabio Malini, from the Federal University of Espírito Santo. According to his research, the same sentence was reposted a thousand times every 40 seconds — although Malini doesn't specify if some of them were bots. The same question was then spread to other platforms (and was satirized in the rock song “Micheque”, wordplay combining Michele, the first lady, and the Portuguese word for “check”).

This graph shows that, even after the first waves of posts, the sentence kept being posted on Twitter and exploded again with the release of the song “Micheque,” on September 30. The data was collected using Twitter's API and analyzed with Python. It represents the number of users reproducing the sentence:

The sentence was first shared in late August but was still being posted as of November 9. As of the date this article was published, Bolsonaro has yet to answer the question.

The Bolsonaro government had initially proposed 200 BRL (35 US dollars) in early March, but the amount was raised to 600 BRL (104 US dollars) after pressure from Congress. To contain public debt, the administration wanted to lower it again to 300 BRL (approximately 52 US dollars) until the end of 2020. Janones, for his part, is advocating for maintaining it at 600 BRL. His campaign escalated on social media, which continues to put pressure on Bolsonaro's administration. Janones is a member of Avante, a centrist party. In a livestream, Janones defined his personal position as neither in the right or in the left.
On September 1, Janones’ Facebook received more Facebook comments than any other Facebook post in the world according to Facebook's social media insight tool, Crowdtangle. Below is the Crowdtangle graph from September 1, which shows the number of interactions in Janone's Facebook posts:

Sleeping Giants is a United States-based Twitter account that pressures companies to remove their ads from websites known to spread misinformation or hate speech. The same principle was adopted by Sleeping Giants Brazil which began targeting ultraconservative news sites in early May, many of which are known to promote a pro-Bolsonaro agenda. Bolsonaro supporters and family members campaigned for a national investigation to discover who is behind the profile. This led to a brief Federal Police investigation, beginning on May 25,, on whether the page had engaged on slander or on undermining freedom of expression.

This initiative reached a wide audience of thousands of people and provoked people to question the validity of the federal investigation. The movement brought awareness about what was happening but had little to no practical influence in stopping the investigation into the identity of Sleeping Giants profile's creator.

In June, journalist Ashley Malia started the hashtag #SoltemGabriel (#ReleaseGabriel) to bring awareness to the case of Gabriel Silva Santos, a young black man who was accused of stealing a car that same month in his hometown of Salvador. The woman who reported her car stolen told police that the suspect was black, young, and tall. The arrest occurred a day after a major Black Lives Matter protest in São Paulo.

RACISM|in the photo we see Gabriel Silva, 22 years old, who was arrested in Salvador accused of stealing a car. He doesn't know how to drive. He was in the bank withdrawing his unemployment insurance. But for being black, “blond”, tattooed and from the favelas, he was arrested for looking like the “description”. #FreeGabriel ??

After social media pressure, Gabriel was released a day later due to a lack of evidence. Gabriel's story also made other people share their stories about racism on Twitter, Instagram, and Facebook. With that, a new hashtag started to circulate. Since the beginning of the Black Lives Matter movement in Brazil, the #RacismoÉPecado (#RacismIsaSin) has been shared on Twitter.