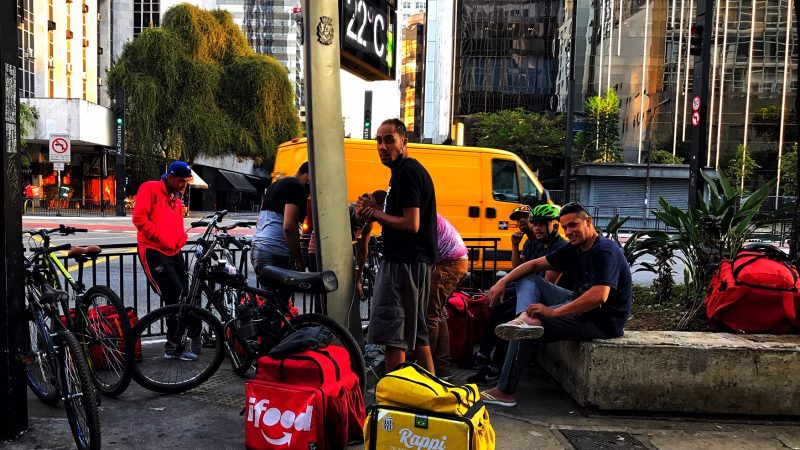 This article was written by Lucas Veloso and Jéssica Moreira. It is published here under a content partnership between Global Voices and Agência Mural.  [3]

As soon as he turned 18, Michel da Silva, a resident of Cidade Tiradentes [4] in eastern São Paulo, registered to work as a delivery driver for iFood, one of the main delivery apps operating in Brazil.

In the six months since Silva began, the work routine has not been easy. Although he delivers food every day, he does not always find time to feed himself. “There is no time for lunch, maybe a coffee, because I wake up early to leave. When I get to have lunch, there is no specific place to eat,” Silva said.

The only way is to sit on the pavement, stop in the middle of the street, or in some public square to get some food. According to Silva, other basic needs are also difficult in the street, such as the lack of toilets.

The conditions he highlighted are common among the complaints of delivery drivers who spoke with Agência Mural. The fall in income due to the COVID-19 [5] pandemic is also one of the reasons mentioned by workers to register on apps like Rappi, iFood, UberEats, Loggi, and James. 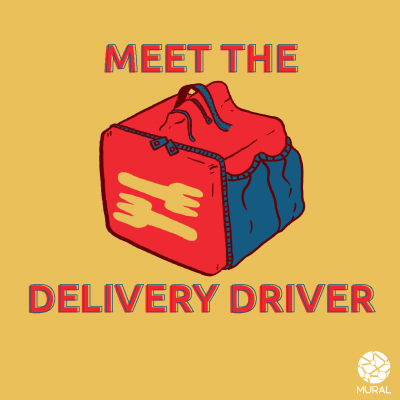 The COVID-19 crisis and the lack of support from apps for delivery drivers are among the main issues that drove the winter protests.

With the pandemic, the number of delivery drivers for apps in the greater São Paulo area, a metropolis of over 20 million people, increased by at least 20 percent, according to SindiMotoSP (Motorcyclist Couriers Union of São Paulo State). The organization's data shows that there are about 280,000 people working on motorcycles or bicycles in the region.

Despite the health dangers, a decree by President Jair Bolsonaro deemed delivery services to be essential activities. 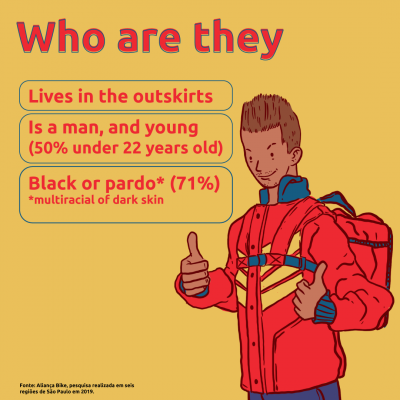 Adriano Almeida, 35, saw the delivery apps as an opportunity to guarantee an income. He is a resident of Capão Redondo [6], in the south of the city, and has been working on a motorbike for two years. Every day he leaves home about 8:00 a.m. and heads to the city centre where he spends the day, returning only after 10:00 p.m.

With bills to pay and no fixed income, Almeida says he makes about 15 deliveries a day. The monthly income covers the bills, but the earnings are low. “We earn very little from deliveries. I can barely pay for fuel,” he told Agência Mural.

Researchers at Remir Trabalho (Network for the Study and Monitoring of Labour Reform) interviewed 252 workers in the sector from 26 cities through an online questionnaire, from 13 to 20 April. 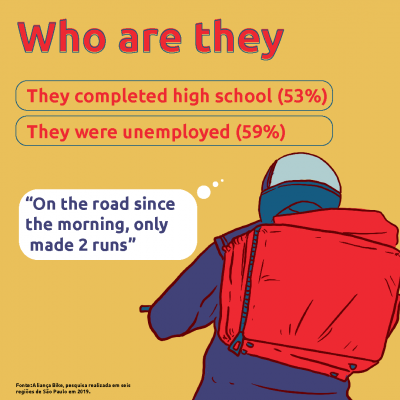 Among those interviewed, 60.3 percent reported a decrease in pay compared to before the pandemic. Another 27.6 percent said earnings remained stable and 10.3 percent said income increased during the quarantine.

Entering this business requires an investment from the deliverer himself or herself. iFood [7], one of the used delivery apps in Brazil, cites the items required for anybody registering: a mobile phone with android and a data package, a vehicle for deliveries (motorbike or bicycle), as well as a thermal box and mandatory traffic safety equipment, such as helmet and jacket with reflective strips.

Allan de Almeida Lima, 24, from Guarulhos in greater São Paulo, has been working as a delivery driver since December 2019. A former driver for a logistics company, he thought that as a courier his financial life would improve, but after six months registered on three app platforms, he was disappointed with the reality. “I went in thinking that I would set my own hours and that I would get money working eight hours, but it's relative.”

Lima says his income does not exceed 1,000 BRL (around 192 US dollars) per month. To compensate, he works in other informal jobs, such as a plumber and bricklayer's assistant to increase his income. “It's hard to go out to work, not see results and be badly treated in some places,” Lima says. 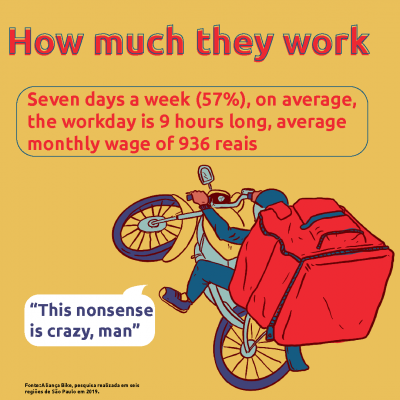 A survey by the Bike Alliance (the Brazilian Association of the Bicycle Sector), based on a sample taken in six regions of São Paulo, shows the social profiles of delivery drivers. According to the survey, the majority live in the outskirts, are young men (50 percent are under 22-years-old), black (71 percent), with up to high school education (53 percent), and are unemployed (59 percent).

Currently, more than half of these workers (57 percent) work seven days a week.

On average, the working day lasts 9.24 hours, making nine deliveries, with a monthly salary of 936 BRL (around 168 US dollars). Those who use a bicycle pedal more than 60km every day, of which 40km are running deliveries and 20km to travel from their home in the outskirts to the city centre. 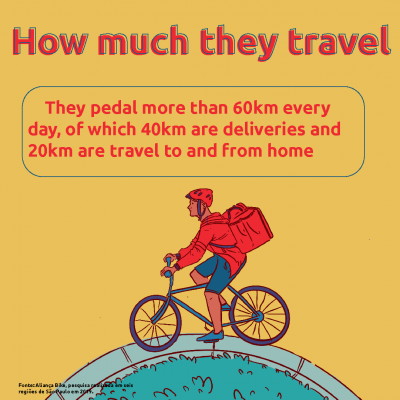 Delivery workers report that they had their account in the apps deactivated during the weeks that they didn't work every day or due to a drop in their ratings. Some refused to talk to Agência Mural for fear of reprisal. The delivery companies deny engaging in retaliations.

Over five days, Agência Mural joined a group of delivery workers’ messaging on Whatsapp. Uncertainty about their daily income is a common problem. 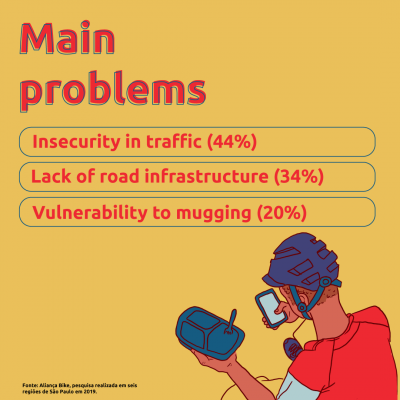 Our work is not highly valued. It is a small wage, you can be robbed, run over, you can die out there on the street and they don't take responsibility for anything, they don't come with anything, they don't give you any help, if you have an accident, the only thing they do is say “get well” to you and it's over. You have to pay for everything, for hospital costs, for everything, so these are things that should change with iFood. Now, I'm going to get myself out on the road and at 10:00 at night, we'll stop, if God blesses us, with the amount of money we want.

Contacted for comment, the apps Rappi, UberEats, Loggi and James did not respond to Agência Mural about the strike or working conditions during the pandemic. 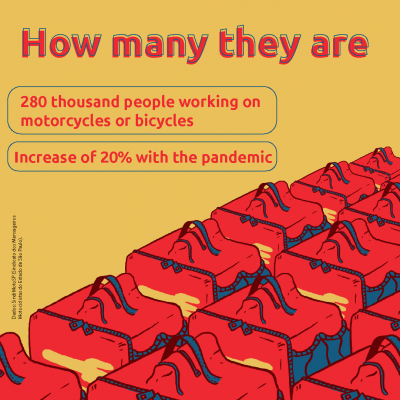 Regarding the delivery worker strike in July, the company says that in cases where it is necessary to deactivate their accounts, the delivery worker receives a message via the app and is directed to a specific chat to understand the reason and to request a review of the case. If an error by the app is proven, the account is reactivated.

The company also says it has taken measures to tackle COVID-19, such as financial aid for those with symptoms and in risk groups, as well as distributing PPE (personal protective equipment).