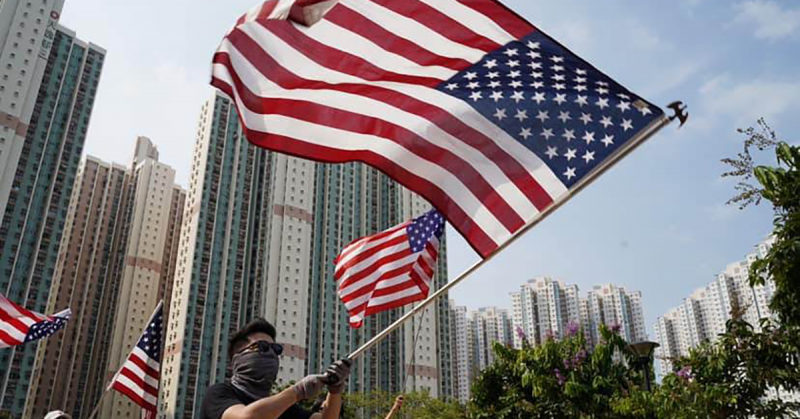 Faced with the failure of successive city-wide protests in recent years, a draconian security law and an intensifying crackdown on opposition figures and the media, Hong Kong activists have increasingly pinned their hopes for democracy on foreign leaders — especially United States President Donald Trump.

Now, with Trump lagging behind in the US election, some activist netizens are near despair, while others caution that it’s not their place to get involved in an American political battle.

China’s fast-tracked encroachment of Hong Kong’s autonomy via the security law and the frequent arrests of politicians, activists and journalists, has left the pro-democracy movement at a low ebb — and Trump seems to be a figure to depend on in the fight against Xi.

However he is viewed elsewhere, the former businessman and reality television star has won support in Hong Kong for appearing to stand up to President Xi Jinping (and China in general).

For one thing, Trump signed into law the Hong Kong Human Rights and Democracy Act, which imposes sanctions on officials for human rights violations. In the past year, the US has also passed legislation targeting Chinese Communist Party (CCP) officials — not just over Hong Kong, but also over abuses against the Uighur population in Xinjiang.

The Treasury Department imposed sanctions on 11 Hong Kong and mainland officials — including Chief Executive Carrie Lam — for rights violations after the Beijing-drafted national security law, which criminalises subversion, secession, terrorism and colluding with foreign forces, was enacted on June 30.

Washington has cancelled Hong Kong’s special trade status, deeming it no longer sufficiently autonomous from mainland China, and Trump has also waged his own trade war against Beijing: he sent senior officials to Taiwan and sold the island weapons despite China’s fury, and harshly attacked Bejing for its secrecy and slow response to the emergence of the COVID-19 virus.

This accumulation of hard blows to Beijing has led many Hongkongers to believe that Trump is their only hope of defeating the CCP and eventually achieving democracy. If Democrat Joe Biden is elected, as seems increasingly likely, they fear he will adopt a softer stance in China-US diplomatic relations.

“Before he was formally elected, Biden already said he would rejoin the Paris Agreement on climate change. The Human Rights Act will also be doomed,” a netizen on the LIHKG forum wrote, expressing concerns shared by many that Trump’s moves against Beijing may be rescinded.

“If Trump loses, it means the entire world will be fascist and ‘red’ [inclined to Beijing] in the name of fake democracy,” another netizen wrote, adding that Taiwan’s sovereignty and East Asia’s autonomy would be under threat:

The governments of European countries and Korea will continue bowing down to the Chinese Communist Party. The entire world is doomed, as we are moving into a worse situation than World War II and the Cold War when there were still liberal countries on our back.

According to the narrative of these netizens, China has seized control of major world organisations and Western media outlets. Some also expressed fears that Biden may take revenge on Hong Kong after several high-profile members of the local, pro-democracy media expressed support for Trump.

Another netizen questioned why so many Americans hate Trump so much:

During his term, the US has been the most domineering in the international community, has been pressuring China, and its stock market keeps going up. True, the pandemic took away many lives, but it’s the same for all countries.

Scholars and politicians across the political spectrum have suggested that the influence of social media reporting can create an echo chamber, with the power to persuade supporters of both camps that they are in the lead.

Why don’t you browse on pro-Trump 4chan and instead torture yourselves with leftards’ Reddit?

‘Leftards’ is a term which refers to unrealistic leftists.

Amid all the fervent support for Trump and frustration over Biden’s likely victory, one netizen wrote a post urging others not to pick fights with the Democrats in the US, but instead, to tell the world why it should not stand in line with the Communist Party:

Hongkongers should not directly interfere in the rivalry between the two [US] parties. Rather, we should focus on promoting how the Chinese Communist Party and communism [are] destroying universal values of the world, committing crimes against humanity, violat[ing] human rights. Do not vent anger on the US elections. You are indirectly disparaging the image of the country.

Please believe that the 200-year-old democratic system in the US can resolve problems. […] You may discuss among yourselves but don’t go and pick fights with US leftists. We should learn from history and not make the same mistake as Chiang Kai-shek.

Chiang was president of the Republic of China and Kuomintang leader during the civil war with the Chinese Communist Party. In 1948, when Democrat Harry Truman and Republican Thomas Dewey vied for the presidency, Chiang‘s aides campaigned for Dewey. After Truman won the election, Chiang’s government was considered unsalvageable and retreated to Taiwan the following year.

Several prominent pro-democracy activists, such as Sunny Cheung, who left the city after the security law was enacted, and Frances Hui, who wrote a column titled, “I am from Hong Kong, not China”, also came under fire from netizens. Their earlier Facebook posts, which clarified some of the disinformation about voter fraud and suggested how Hongkongers should position themselves during the US elections, were labelled as pro-Biden.

Several outraged social media users slammed them for being opportunist and licking the Democrats’ boots, saying that they have betrayed the movement. In response to the attacks, Hui questioned whether pro-democracy netizens had turned into a “government-support-style propaganda machine” and urged critics not to root for any one candidate.

Pro-democracy activist Joey Siu, adviser for the international cross-party group Inter-Parliamentary Alliance on China, wrote on Facebook that Americans are electing their own leaders and have other policy considerations than just their country's stance on China:

In another post, she urged netizens to respect the results, favourable or not, and to stop spreading fake news.

Samuel Chu, founder and managing director of the Hong Kong Democracy Council, told Stand News that no presidential candidate can single-handedly save Hong Kong, and suggested that Hongkongers should not get bound up with the idea that one candidate would be better than the other.

In a separate statement, he added that regardless of the final outcome of the presidential poll or which party controls the Senate, both US parties and their leaders have pledged continued support for the democratic aspirations of Hongkongers.