Myanmar candidates and parties turn to religious nationalism ahead of elections

Race and religion-based campaigning is prohibited under electoral regulations 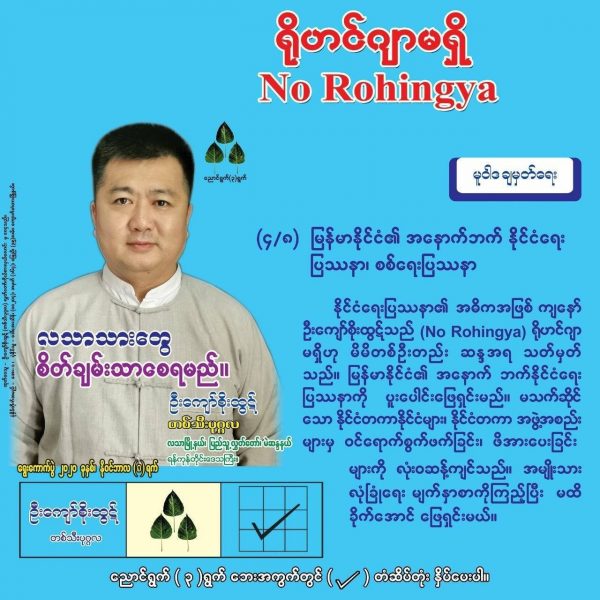 This is the campaign poster of independent candidate U Kyaw Soe Htut in Yangon. The manifesto vows to peacefully solve the national security problem with the slogan “No Rohingya.” Complaints have been filed against the “No Rohingya” message, but the election body has not taken action so far. Source: Unverified Facebook page of U Kyaw Soe Htut

Myanmar election monitors have been identifying the use of religious-nationalist messaging by major parties and candidates in the lead up to the November 8 elections.

The Union Election Commission’s Code of Conduct for Political Parties and Candidates clearly states that race and religious-based campaign messages are prohibited. Nevertheless, party candidates have used religion to persuade voters through their offline speeches as well as on their official Facebook Pages. Myanmar has a Buddhist Burmese majority and a large number of ethnic minority groups.

There are 90 parties competing in the election but the two major contenders are the ruling party National League for Democracy (NLD), led by the country’s de-facto leader Aung San Suu Kyi, and Union Solidarity and Development Party (USDP), led by former Military General Than Htay.

This is Myanmar’s third election since the democratic transition in 2010. USDP assumed power in 2011 under the presidency of a former military general, Thein Sein. A series of Buddhist-Muslim conflicts broke out between 2012 and 2014, mainly in the western state of Arakan.

In 2015, NLD won a landslide victory during the second general elections under the leadership of Aung San Suu Kyi. In 2017, the Myanmar military conducted a military clearing operation against the Arakan Rohingya Salvation Army (ARSA), displacing hundreds of thousands of Rohingya and forcing them to seek refuge in the neighboring country of Bangladesh. In 2019, Gambia lodged a genocide case against Myanmar at the International Court of Justice (ICJ) for the military’s treatment of the minority Rohingya Muslims. The Myanmar government has denied that it committed genocide.

Rohingya people are not recognized as an ethnic group under Myanmar’s current discriminatory citizenship law. In fact, the government has persistently refused to use the word Rohingya, and instead adopts the word “Bengali” to denote that they are illegal migrants from Bangladesh. A million Rohingya have been disenfranchised again from voting in this year's election.

‘Vote to protect your religion’

Some of the candidates and supporters of the two parties have emphasized Buddhism in their online and offline campaign messages, while some rally-goers have been explicitly using slogans like “vote to protect your religion.”

In a monthly online monitoring report of official election profiles and pages on Facebook by Loka Ahlinn, the organization found that the USDP, the NLD, and the People’s Pioneer Party (PPP) have released the most religious-based campaign messages through their official channels between the period of September 8 to October 7. The report notes that religious nationalism appears in the form of candidates portraying themselves as patrons of Buddhism, or explicitly appealing for nationalist actions to protect Buddhism.

Individual supporters have also used the same narratives to promote their chosen party. For example, influencer Zarni Htike, who has over 200,000 followers on Facebook, frequently uses nationalism to promote the NLD. Meanwhile, Nanmyamya Miemie Zaw, who is the spokesperson of the USDP, regularly uses religious rhetoric to persuade voters on Facebook. On October 24, Nanmyamya Miemie Zaw wrote:

[We are] not campaigning with religion. We are protecting.

In addition to the contenders’ official social media accounts emphasizing Buddhism in their online messages, examples of religious-nationalism have been observed at campaign rallies.

On October 25, a complaint was lodged against the USDP by the NLD for using a song in a rally which included lyrics such as “vote USDP to prevent our religion from disappearing.”

The next day, NLD again pressed charges against USDP rally-goers in the Mandalay region for playing a parody song that included lyrics accusing NLD of being a “religion destroyer” as well as insulting Aung San Suu Kyi. The song also included racist hate speech against Muslims. “Religion-destroying party” or “သာသနာဖျက်ပါတီ”​ is a reflection of broader racist conspiracies that accuse the NLD and Aung San Suu Kyi of supporting Muslims.

On November 3, a group of nationalists in Yangon and Mandalay started a campaign by handing out pamphlets that included the message “vote those who can protect race and religion.” The campaigners claimed that they were not affiliated with any party.

At the same time, on Facebook, numerous unofficial groups, pages, and fake profiles of party supporters have been explicitly echoing messages of religious nationalism and attacking other parties using hate speech against Muslims. For example, a study by Burma Human Rights Network on online hate speech during the election period revealed that Muslim conspiracies are used to undermine NLD. Conspiracies range from Aung San Suu Kyi selling the nation to Muslims to NLD bringing “illegal Bengali Muslims” into the country.

On October 13, a USDP candidate in the Magwe region used false and racist information against the Rohingya in his campaign speech. He said that the current government has allowed illegal “Bengalis” to stay in Arakan state.

Meanwhile, an independent candidate Kyaw Soe Htut, representing the Latha township constituency of Yangon city, has publicly set up a campaign billboard stating “No Rohingya.” Although complaints were filed against the candidate, the Union Election Commission has not yet taken action.

The PPP, also an important contender in this year's vote, has also pursued religious-nationalist politics during the campaign period. Party leader Thet Thet Khaing has publicly used controversial racist words like “kalar,” which refers to Muslims and people of Indian descent in Myanmar. She has also said that PPP policy stands against using the name Rohingya in her viral media interview video.

While some candidates have used religious-nationalist themes in their campaign, there is at least one candidate, from the Democratic Party for a New Society, who has spoken strongly against discrimination and called for amending the citizenship law.