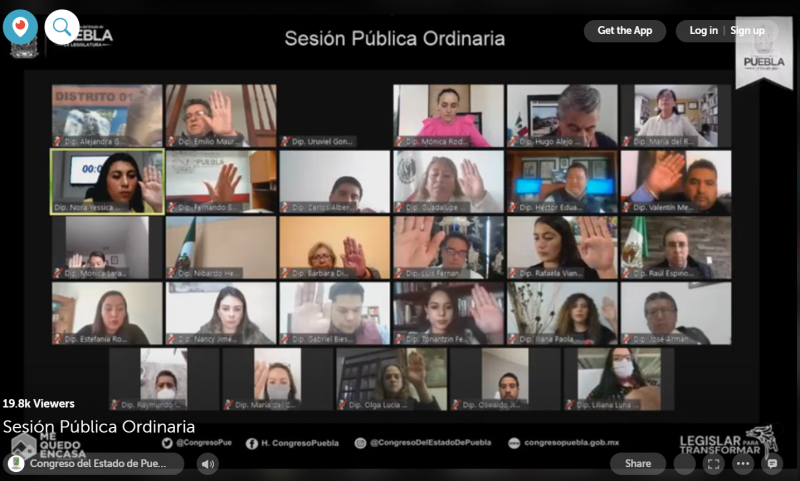 On November 3, Puebla became the 19th Mexican state to recognize same-sex marriage in the country. Thirty-one congresspeople out of 39 raised their hand to pass the legislation under the gaze of nearly 20,000 viewers on Facebook Live [2] and Periscope [1]. The meeting was held virtually to respect social distancing measures [3].

Puebla's recent ruling in favor of recognizing same-sex marriage follows in the footsteps of 18 other Mexican states such as Mexico City, Jalisco, and Quintana Roo.

In 2015 [4], the Mexican Supreme Court delivered a groundbreaking ruling [5] which provided the legal basis for courts throughout Mexico to approve same-sex marriage. Since then, a series of federal appeals have ruled in favor of same-sex couples, including a 2017 Supreme Court ruling which struck down [6] Puebla's same-sex marriage ban.

In December 2019, Celeste Ascencio from the ruling party MORENA launched [7] a process to amend the Mexican Constitution and make same-sex marriage legal nationwide in Mexico. This process is still pending.

In 2016, one out of seven polled Mexicans disagreed [8] with the right for LGBTQI+ people to get married. The percentage fluctuates over time, with some years showcasing more approval than others. On Twitter, however, reactions [9] were overwhelmingly positive at the news:

With 31 votes in favor, 5 against and 3 abstentions, #Puebla approved #SameSexMarriage ?

Bravo!!!
The Congress of #Puebla approved the initiative to recognize #SameSexMarriage

Today, one of the many battles for which we have worked on year after year was won. Now #SameSexMarriage is a reality in #Puebla.

All people, all families, all the rights. #MarriageEqualitarianPeople