In the Balkans, COVID-19 measures may not apply to religious leaders 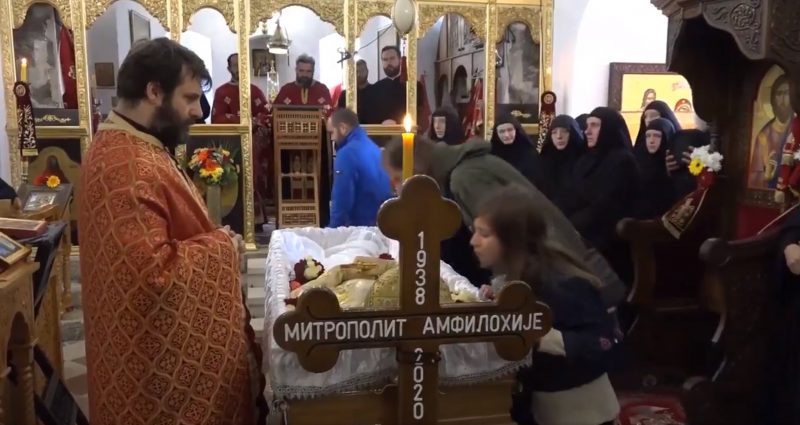 Screengrab from a widely shared video by Twitter user @DoturLui.

The Balkans reacted in outrage at the sight of thousands of people queuing to kiss the mortal remains of the Bishop Amfilohije Radović, the 82-year-old head of the Serbian Orthodox Church in Montenegro who died of COVID-19-related causes on October 30.

Mourners came, for the most part maskless, to the bishop's wake and funeral at Podgorica's Serbian Orthodox Cathedral by the thousands. In the small, little-ventilated room where his body lied in an open casket, priests and nuns recited litanies for several hours throughout the weekend of November 1.

Footage that circulated on social media showed that the ceremony disregarded the government's safety measures against COVID-19, including the prohibition of large gatherings, mandatory mask-wearing in all public spaces, and physical distancing of at least 2 meters.

Appeals by the medical community for clerics to at least veil the body with a closed casket were also ignored. Many of the funeral's attendants were families with young children.

This tweet includes a video of the wake on October 30:

Inoculation of Serbs in Montenegro against the coronavirus. #EXCLUSVE …

Two high-ranking clerics who have attended the funeral have since tested positive for COVID-19: Patriarch Irinej, the head of the Serbian Orthodox Church in Belgrade, and Amfilohije's heir apparent in Montenegro, Bishop Joanikije.

Amfilohije's funeral is an example of high-profile clerics consistently interfering with COVID-19 prevention measures in the region, especially in the Western Balkans.

Amfilohije himself led a pilgrimage to Ostrog Monastery in May with hundreds of worshippers despite a ban on all public gatherings in Montenegro. At that time, the bishop said that the pilgrimage could even “heal the virus that has conquered the world today.”

In Serbia, the Episcope of Valjevo Milutin Knežević said on March 15 that “if there's faith, the body and the blood of Christ can vanquish any disease” when referring to the Holy Communion, a Christian ritual in which, in some Orthodox traditions, worshippers drink consecrated wine from a shared spoon. He contracted COVID-19 and died two weeks after giving that statement at age 71.

Despite the obvious risks it poses, the Holy Communion continued to be practiced in churches across the Balkans during the spring, when COVID-19 was rapidly spreading in the region. At that time, many religious leaders denied the ritual's dangers in the current circumstances, when not falsely flaunting its supposedly healing powers.

On social media, users have shared videos of Easter rituals that took place at that time:

How the personal distance and government advice has been respected.

In Belgrade's Temple of Saint Sava, more than 20 church employees tested positive for COVID-19 in April, including the Episcope Stefan Šarić, who serves as a Vicar to the Patriarch.

Current official figures for COVID-19 in Serbia are 55.676 infections and 861 deaths.

Meanwhile, in Greece, where the Orthodox Church is also very influential, at least one priest was arrested for violating lockdown rules. In the Western Balkans, however, a religious figure is still to face prosecution for similar actions.

In countries with sizable populations of different faiths, such as North Macedonia, religious institutions have frequently pointed fingers at each other for violating prevention measures, at times using the perception of a double standard as an excuse to disregard the rules as well. 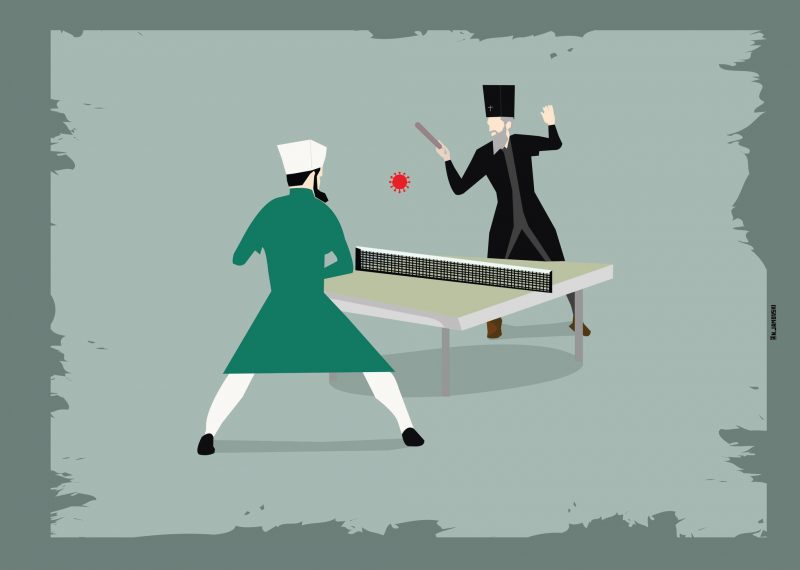 For instance, after a massive Orthodox Christian procession in the city of Struga on May 6, which glaringly violated emergency regulations against public gatherings and physical distancing, the Islamic Community of Macedonia (IRC) held an urgent meeting deciding to reopen the mosques which had been closed since mid-March.

As the holidays associated with Ramadan approached, the IRC chief, Efendi Sulejman Rexhepi, threatened to revoke support for the COVID-19 measures unless the government provided financial relief to the organization, which suffered from a decrease in donations during the lockdown.

Macedonian Orthodox Christian Bishop Timotej — whose domain, in the southwest, includes the key religious center of Ohrid — voiced a similar message as he lamented that the lockdown had also affected Easter celebrations, which generate, he says, half of the church's annual income.

At the end of the Muslim holy month of Ramadan, when Ramazan Bayram, or Eid al-Fitr, is traditionally celebrated with large family gatherings, Rexhepi caused a scandal when he declared, outside of a packed mosque, that the virus was “dead,” and that the faithful had nothing to fear. The video below includes footage of that moment:

In the end of May, the highest body of the ICR dismissed Rexhepi from the position of chief with no official explanation. Previously, Rexhepi has been repeatedly criticized for his statements and social media behavior, as he frequently posted photos carrying firearms and dead animals. Days before he was dismissed from the ICR, local tabloids reported that he had recently married a 24-year-old woman (he is 74).

In 2019, Rexhepi spoke in an ethnic Albanian village that it was “impossible to cohabitate” with “these savage people without an identity,” supposedly referring to ethnic Macedonians. Despite the public outcry, North Macedonia's Prosecutor's Office at that time decided not to press charges against him, on the grounds that he didn't use the word “Macedonians.”