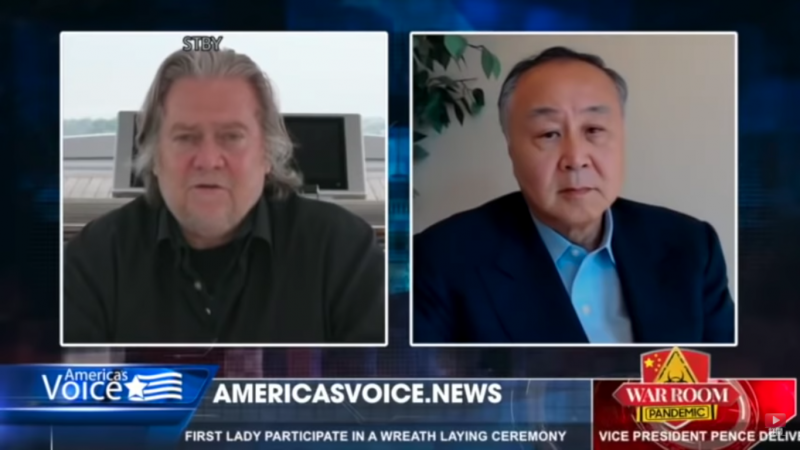 The following post is a partial translation of a feature story published [2] on the Stand News on November 2, 2020. It is published on Global Voices under a content partnership agreement.

There have been a number of pieces published on anglophone media [3] analyzing the phenomenon in which Hong Kong pro-democracy activists root for of U.S. President Donald Trump to be reelected.

Chan Lai Chung, 61, is one of those supporters, and this is her story.

When the anti-extradition protests broke out in 2019, Chan was living in the city of Zhongshan in China with her sisters. As soon as she had a chance, she went back to Hong Kong to join the demonstrations — and never set foot on the mainland ever since.

Chan not only took part in the protests but also became a court observer and frequently paid visits to arrested activists in correctional facilities. She looks and sounds heavy when she talks about the arrests: “We don't have guns and cannons in Hong Kong, so if the international community doesn't speak up, we can't do anything.”

As the protests has subsided in 2020, she started spending more time on social media platforms. A few months ago, she got to know the YouTube channel “Father Yuen, Yuan Gong Yi Political and Economic Commentary.” [5] Offering political commentary on the United States, China and Hong Kong in Chinese, the channel amassed a following of 175,000 since it was created in May.

“Father Yuen” is 71-year-old businessman Elmer Yuen Gong Yi [6], whose daughter Erica Yuen is the chairman of the People Power, a pro-democracy political party founded in 2011 which has relied on online radio and social media to reach out to its supporters. In early June, Elmer Yuen left Hong Kong for Washington, D.C., where he started to meet with U.S. political figures as a private diplomatic lobbyist.

As the National Security Law was enacted in Hong Kong in July, Yuen decided to stay overseas. By August, he had more than 100,000 subscribers on his YouTube channel, including Chan.

“I really enjoy listening to Father Yuen,” she says, “he has drawn a road map and led me along”. Every day, apart from attending protesters’ trials in courts, Chan spends her time watching political YouTube channels, she says.

When asked about the U.S. elections, Chan answered: “Trump supports Hong Kong, Biden supports China.” When asked to explain, she says: “Trump proved to be tough with China by starting a trade war, while Biden says he will lift the tariffs imposed on China.”

In August, Biden was asked in an interview on NPR whether he'd “keep the tariffs  Trump imposed on Chinese-made goods, to which he appeared to say he wouldn't [8].

Chan says that in order to defeat the Chinese Communist Party and save Hong Kong, Hongkongers must support Trump's re-election.

Her YouTube recommendations include news reports from the Epoch Times [9], Voice of Hope [10], and Radio Free Asia (RFA) [11]. The first two channels are Chinese-language media outlets funded by Falun Gong [12], a Christian group from China forced into exile by the Chinese government in the 1990s.

A recent investigation by the New York Times [13] revealed that the Epoch Times’ support for Trump boosted its influence among right-wing readers in the United States.

When asked about the latest news she has learned about the U.S election, she pointed to a news report in the Epoch Times’ YouTube channel YouTube. The headline of the 25-minute report [14] is “Biden’s 5 million bribe / Joe Biden spies on his son and brother, the family is in chaos / New York Time has been infiltrated? / Xi Jinping attempts to subvert the U.S with 600 organizations! / The 0 patient is man made? Story behind the Covid 19 outbreak in Xinjiang”  and its content is full of unverified claims, conspiracies and disinformation.

When asked about her knowledge of Joe Biden, Chan said “Biden’s son has something with his niece,” likely referring to a hoax that falsely alleges that inappropriate photos of Joe Biden's 16-year-old grandaughter Natalie Biden were found on the computer hard drive of the presidential's son Hunter Biden.

Most of the mainstream media in the U.S. questioned the story's credibility and didn't follow up on it. The pro-Republican Wall Street Journal, which also has had access to the hard drive [16], only published a short article stating that the allegations against Biden have not been proven.

But on Yuen’s YouTube channel, Giuliani's character [17] was praised, the content of the hard drive called “evidence.” The Epoch Times also published a number of videos taking the emails as hard evidence of Joe Biden’s involvement in Hunter's Ukrainian dealings.

“Father Yuen said the majority of the media in the U.S has suppressed the hard drive news,” Chan says. She adds that almost half of the U.S. media, including CNN, “have been bought by China.” Chan says she never reads English-language news.

A few days ahead of the U.S presidential election, Yuen quoted Trump in his YouTube video titled “China will own the United States if Biden is elected.” [18] In fact, soon after Yuen launched his channel, he claimed [19] that China's President Xi Jinping had set up a 1.5 billion USD fund for Biden’s son to manage.

Chan says she agrees with Yuen that Trump “cannot lose.” She is glad that “Father Yuen” has helped her understand geopolitical issues and believes that he should be the chief executive upon Hong Kong’s “liberation” from China.