Freedom in sight for Kaavan, ‘the world's loneliest elephant’

Kaavan will soon be relocated to a sanctuary in Cambodia 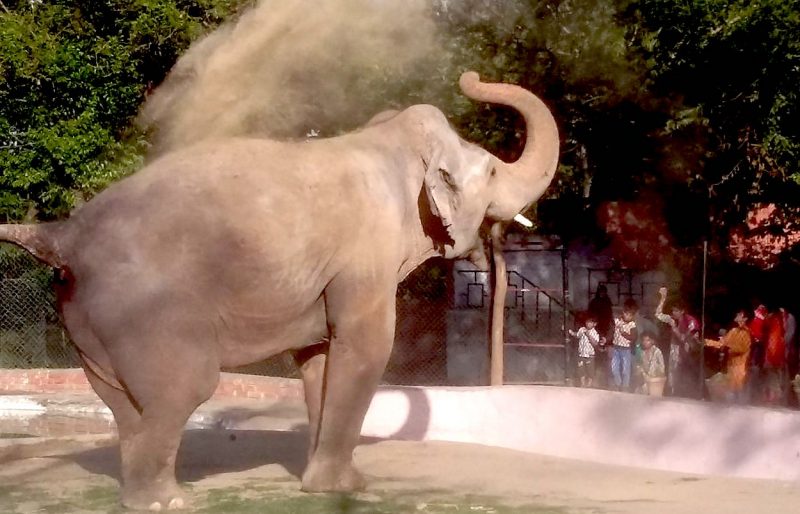 An elephant in a Pakistan Zoo. Image via Wikipedia by Mfawadazhar. CC BY-SA 4.0

Kaavan, Pakistan's only Asian elephant, has been kept confined at Islamabad's Marghazar Zoo for over three decades.

Animal rights activists have long highlighted the poor treatment the elephant has received and in 2015 started a campaign to rescue Kaavan from the zoo which was endorsed by pop star Cher. In May 2020, Islamabad High Court ruled in favour of relocating Kavaan from Islamabad to a suitable sanctuary.

In 1985, the Sri Lankan government gifted Kaavan, then a young calf, to Pakistan in an effort to strengthen bilateral relations between the two countries. In 1990, Kavaan was joined by a mate named Saheli, who came from Bangladesh. Saheli died in 2012, turning Kaavan into “the loneliest elephant.” He started showing signs of lethargy, stress and later aggression, which led his keepers to chain him.

Kavaan declared as the ‘World’s loneliest elephant’ in The Guardian newspaper. https://t.co/SaPQ1OIJT6

The long struggle to free Kaavan

In 2015, a student called Samar Khan launched an online petition to have Kaavan's chains removed and highlighting the elephant's poor condition and state of isolation. Khan also created a Facebook page titled “Free Kaavan The Elephant” to share news about the elephant's plight.

Cher has been campaigning for Kaavan's release through her foundation Free The Wild, which aims to protect wild animals in captivity.

In July 2020, in an emergency meeting at the Islamabad Wildlife Management Board (IWMB), the Pakistan Government proposed to relocate Kaavan from Islamabad to The Cambodian Wildlife Sanctuary, where he will be in the company of over other 80 pachyderms and be cared for by wildlife experts.

The relocation will be undertaken with the help of Four Paws International, an Austrian animal welfare organization who have supported the rescue of over 30 zoo animals in Pakistan.

The crate to transport Kaavan to Cambodia has already been built with the support from Free The Wild and adorned with traditional artwork.

Hope for other animals in the Marghazar Zoo

On May 22, the Islamabad High Court (IHC) ordered the IWMB to relocate all animals in the Marghazar zoo to sanctuaries, including Kaavan.

Of the 917 animals and birds in the zoo, 513 went missing during re-location and ten others died, including two lions who expired after inhaling smoke from their handlers had lit to scare them. The rest were successfully relocated by the IWMB.

Experts from Four Paws came to Pakistan in August 2020, and since then Egyptian Dr. Amir Khalil, director of Four Paws had been working with Kaavan, training him, singing to him and playing with him. Khalil, who assessed the conditions at Marghazar and deemed them dangerous for the animals, has been leading the campaign for their relocation.

Relief for #Kaavan in sight as Cambodia issues relocation permit
?Kavaan to be moved to a sanctuary in Cambodia within a month. The Cambodian government on Friday issued a permit for the transfer of Kavaan from the Islamabad zoo to a local sanctuaryhttps://t.co/Ue26wpNnwi pic.twitter.com/UtGBQ7iwMW

Animal activists in Pakistan have long worked to create better conditions for zoo animals, and also to end dog culling and other forms of brutality. Faryal Haque, an animal activist from Islamabad, told Global Voices that:

Kaavan has come back to life because of Four Paws and efforts of Dr Amir Khalil. They have become good friends. But it is a pity the way animals in the Islamabad Zoo were kept. It is time to put an end to these zoos and move towards digital zoos and let animals live in their natural habitat.