One of them allegedly has direct ties with the CCP 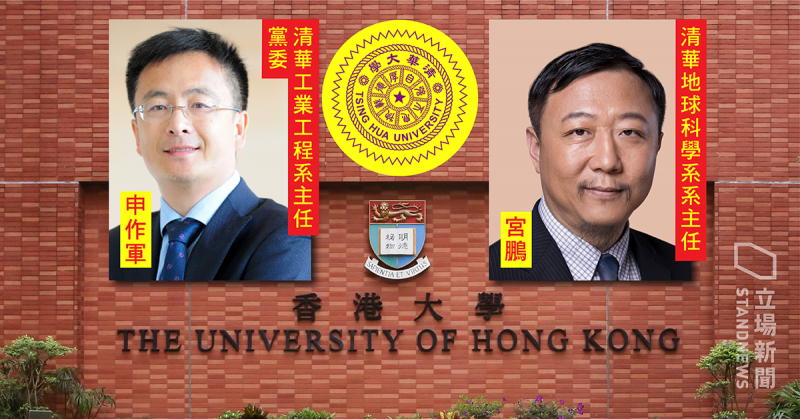 Hong Kong's academic freedom is potentially set for another blow as the governing council of Hong Kong University (HKU) confirmed the appointment of Max Shen Zuojun and Gong Peng as vice-presidents, respectively, of research and of academic development.

Both men hold positions at Tsinghua University in Beijing and the University of California (UC), Berkeley. Their appointment is viewed by students and alumni groups of HKU as a “take-over” of the island's top university by the Chinese Communist Party (CCP).

Controversy erupted after Hong Kong media discovered pages of Tsinghua's official websites showing that Shen was elected, in 2014 and 2017, as a member of the CCP committee of the university's department of industrial engineering.

However, Shen's name no longer shows in the live versions of the respective pages. According to web forensics conducted by former director of Journalism and Media Studies Center of HKU Ying Chan, the pages were altered after the news of his appointment to HKU broke at the end of last week. Google-cache has preserved previous versions of the pages, Ying said on a Medium post.

In a statement, Shen said he has worked full-time at UC Berkeley since 2004 and that he only spends “a few weeks a year in Tsinghua.” He added that he is “not a member of the Chinese Communist Party” and that the confusion was caused by “an oversight by the webmaster of the respective website.”

As for Peng, since 2010 he has faced accusations, mainly waged by overseas Chinese websites, that he helped the daughter of China's former Minister of Science and Technology Xu Guanhua getting accepted into a Ph.D. program at UC Berkeley's Department of Environmental Science, Policy and Management in 1999. Gong denies those accusations.

HKU's Alumni association pointed out that the HKU's vice-chancellor Zhang Xiang, who led the recruiting for the two positions, had crossed paths with the newly-appointed vice-presidents: Zhang and Shen both have attended Nanjing University and all three of them have worked at UC Berkeley at around the same period.

The ties between the three men are been seen by Beijing's critics in Hong Kong as “cronyism” in the appointment choices.

Since 2018, universities in mainland China have faced pressure to pledge loyalty to the CCP, with some forced to change their charters to accommodate CCP members on their administrations and boards.

When Zhang became HKU vice-chancellor in 2018, the student body, together with alumni communities, expressed concern that the mainland-born professor would interfere with the institution's academic freedom.

Their doubts turn out to be justified. In July 2020, HKU's tenured law professor Benny Tai was fired by the governing council for his involvement in the pro-democracy protests of 2014, despite objection from his department and the university's senate.

Jeppe Mulich, a London-based lecturer of political history, noted on Twitter at the time of Tai's sacking:

The process towards his firing has been underway for some time, and it is a reminder that academic freedoms have been under threat well before the national security law. Now, however, the attacks on academia are on full display, as seen by the LO statement last night.

Earlier this month, HKU, in defiance of protests from faculty members and the academic council, didn't renew the contract of Head of Public Health Keiji Fukuda, who is also an advisor at the World Health Organization (WHO) and has led the university's research into COVID-19.

Sources speaking on the condition of anonymity to pro-democracy newspaper Apple Daily News said Xiang was behind Fukuda's dismissal:

Top pandemic expert Keiji Fukuda (福田敬二) will leave his role as the head of HKU’s public health school after being vetoed by university president Zhang Xiang in contract renewal, according to source.

The student union of the University of #HongKong on Tuesday resorted to an impromptu sit-in protest outside the building where the university's governing council was meeting to reportedly discuss the appointment of two Tsinghua University scholars https://t.co/wPR2AEA8rs

But the action was in vain. According to a statement by Council Chair Arthur Li, all council members with exception of the student representative voted in favor of the two appointments. Frances Sit from public broadcaster RTHK tweeted:

#HKU Council Chairman Arthur Li's​ statement: 2 profs made special effort to clarify positions, incld statement from #MaxShen confirming he is not a CCP mbr nor a party committee mbr. Issues of concern have been satisfactorily clarified & allegations found to be unsubstantiated https://t.co/bPEMBnteFl

Former HKU student and Vice-Chairman of the Democratic Party Lo Kin-hei expressed frustration over the nominations on Twitter:

- Most saddening for HKU is that here's NO FORCE FROM WITHIN to stop or delay it. I didn't expect the fall is so complete.

- 1st commandment for CCP members – you can deny you are CCP member.

Fergus Leung, a district councilor who is currently studying at HKU, said:

4/ And now, they are appointing professors with strong affiliation to the authoritarian regime of CCP to takeover research and academic development of our University. This shall signal the end of academic freedom and institutional autonomy at HKU.

In the past few months, several universities in Hong Kong dismissed pro-democracy academics. Lokman Tsiu, an assistant professor at the Chinese University of Hong Kong, is among those whose contracts were terminated. He tweeted a list of other university professors who were in a similar situation, and whose terminations were regarded by the public as highly controversial: